You play as Kay, a young warrior who is tired of his people being oppressed by the invading gorillas and rats, an average story with nothing to over the top. With a sword in hand and a fiery spirit he sets off to free his people. Throughout the story you meet other inhabitants of the island who have also been oppressed. It falls on you, the player, to help rescue prisoners, stop invaders and liberate the land, leaving behind a Legend of your own. 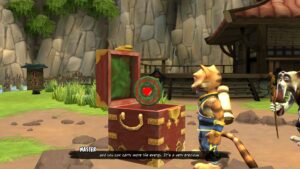 One of the high points of this game is the combat. From start to finish you are fighting your way through ever growing hordes of enemies. As the game progresses you encounter new enemies that require different techniques to finish off, adding to the depth of the combat. You acquire a magic lightning attack early on in the game that can deal damage and knock over all enemies within a certain radius, which if used effectively can wipe out a horde with one use.

The bread and butter of the combat is the combo system. From the start of the game it tells you that comboing will always give you an advantage in battle. Once you kill an enemy you can jump to the next with a strong attack. At times you are locked into a room with 15+ enemies all attacking you at the same time, best way to deal with them is to dodge then kill one and combo your way through the rest. At times, you will be fighting ground enemies when a horde of aerial enemies will appear and the best way to deal with them is to combo your way one by one if not they will just overwhelm you.

Some of the treasure boxes found around the world are locked behind combo locks that require you to have a certain combo to break the lock. Races are also another part of gameplay, some are mandatory to do in order to move to the next area while others are off to the side and have valuable items waiting past the finish line.

The puzzles throughout the game are neither difficult nor easy, but fall right in the middle of both. They can be solved with some simple thinking and are never long enough to stop the flow of the game. The one thing that gameplay does suffer is the camera system. From time to time the camera will either zoom in to close to the character or a wall, making it near impossible to see what threats may lie in wait. It can be frustrating when in a puzzle room with moving parts or timed areas. In one of the later levels I ended up falling through a trapdoor putting me in an endless loop of falling to my death until the game fixed itself. 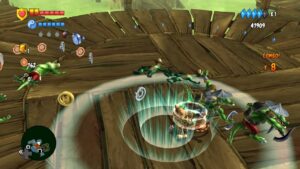 The graphics of the Anniversary edition are vastly superior to their original counterparts. The upgraded character models and high resolution textures bring new life into this old PS2 game. Along with the graphics, the sound has been updated, but it isn’t as noticeable since the music and background noises usually don’t help much to immerse the player into the game. The voice acting in this game is one of its biggest downfalls.

Every character in the game is voiced which is great but listening to forced accents and bad puns is a little off putting if not annoying. It seems like they just decided to do the voice overs at the last second and didn’t care on how it turned out to be. Also during cutscenes, you can hear enemies in the background trying to attack you or moving along the map which can be distracting. It just makes you not pay too much attention to the cutscenes or story overall. 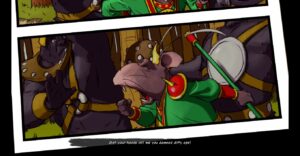 The game has four difficulty settings ranging from easy to nightmare mode, with each increasing difficulty means taking more damage from enemies and dealing less as well. Nightmare mode is truly a test of skill for people who are willing to give it a shot. There are collectables hidden throughout the levels along with demon portals, which are only found with a special potion. Though it doesn’t require multiple playthroughs it, it is a game that has some replayability.

Legend of Kay Anniversary does have some high points that are brought down by its low points, it falls short to be a great gaming experience and feels like it could have done more for its 10th Anniversary remastered. Legend of Kay Anniversary is a game that reminds you of the PS2 era of gaming and can be somewhat nostalgic but it also reminds you that sometimes the past isn’t always the best. Neon Studios has stated that they would like to continue the Legend of Kay series in the future. If they learn from the mistakes of the this game while keeping the core gameplay then I’m sure they can make a great game.

This review is based on a review copy provided by Neon Studios and THQ-Nordic Games.