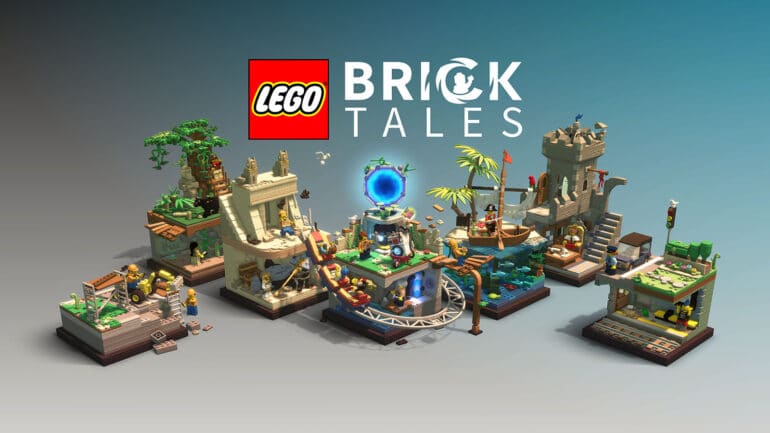 LEGO Bricktales is an upcoming LEGO puzzle game from ClockStone, the same folks who developed a couple of bridge constructor games, including Bridge Constructor Portal. Though it was developed by a different studio, Bricktales gives out the same vibes similar to LEGO Builder’s Journey that came out last year. Thanks to Bricktale’s demo available on Steam, we were able to try out and experience what’s in store for us in this game.

First off, as I’ve mentioned earlier, the visual vibes of Bricktales are definitely similar to Builder’s Journey, though the main difference is the size of each playable area. Bricktale’s “overworld” areas can be described as oversized LEGO “vignettes” or dioramas that more or less have the same theme all throughout, resting on top of what seems to be an infinite table. The color and lighting are just at the right balance that makes the dioramas look like you’re actually looking at a real LEGO display.

There are different levels of elevation which give a bit more depth to each area, plus because of its camera perspective, it allows for a bit more exploration by having secret passageways or areas hidden behind the diorama that can only be seen when the diorama rotates.

As for its gameplay, the demo only included its tutorial level and a part of its first stage, where there were a couple of puzzles that can be played. These puzzles’ objectives are to create something that will help your character traverse an obstacle in order to get to the next point. The player can only control the character as they explore through the area, but the real building process happens in a separate “build mode”.

As the character goes through the area, there will be points of interest that can be interacted with, which will open up the build mode. Each build has pre-determined amounts and types of bricks, and point A to point B markers are depicted as red bricks. Additionally, physics plays a part in the game as a stack’s load determines whether the bricks will stay connected or fall apart.

There’s also a simulate option that deploys a robot whose task is to test out the integrity of the build by going through it. Surprisingly, despite being a non-controllable robot, it has a simple path-finding AI which allows it to go on non-straight paths on its own. Once the build gets its “robot certification”, then it can be deployed in the playable area for your character to use. Otherwise, you’ll have to remodel the build until it is structurally sound.

Based on my experience, the bricks that were provided were more than enough to pass the level. There were even times when I did not use about half of the bricks for the build, yet my build was deemed deployable. There aren’t any bonus scores being tallied for using the least amount of bricks, or being able to use all of them, so it’s basically up to the player if they want to speedrun the game, or take their time and make the best-looking build from the bricks given. I’m no master builder, but if there were spare bricks, I often found myself spending a bit more time making my build a bit more in theme with its surroundings.

For most of the puzzles, there were no set instructions to follow, so it’s up to the builder how they’ll make their build in whatever configuration, as long as it does the task. However, builds are still limited in a way since bricks can only be rotated on a single axis, and there are definitely no illegal connections allowed, but I guess it’s by design to keep the game from being too complex.

As for its building controls, it takes a bit of time and some practice to re-orienting the camera to be able to lay down a brick on the spot where you wanted it to be. The camera can be rotated a bit more freely and has most of the camera control options in most games, but its angle for the up and down tilt is a bit limited. Thankfully, the game has the option to adjust the “elevation” of the brick and it automatically snaps in place if it’s a valid spot.

It seems that there’s a lot more to see in Bricktales. The demo ended just as I was about to meet another NPC in the Jungle level and there was definitely some sort of a collectible mechanic and a shop mechanic which I can find myself spending a couple more hours on to get a 100% completion.

Bricktales appears to have the proper mix of freedom and creative thinking that brings out the fun in building with LEGO bricks, even though it’s all just virtual bricks. It’s also a good contrast to TT Games’ dozens of LEGO games where destruction is pretty much the fun part.

What I’m looking forward to the most is the building proper itself which greatly offsets the linear story progression of the game. Honestly, it took me longer than expected to solve the very first puzzle in the Jungle level; I only managed to get the solution when it dawned on me that the path to the goal didn’t have to be a straight one. After that, it set the tone of how I tackled the other builds and I managed to solve them much more efficiently.

LEGO Bricktales is planned to release on Steam in 2022. The demo of the game can be downloaded on its Steam page.