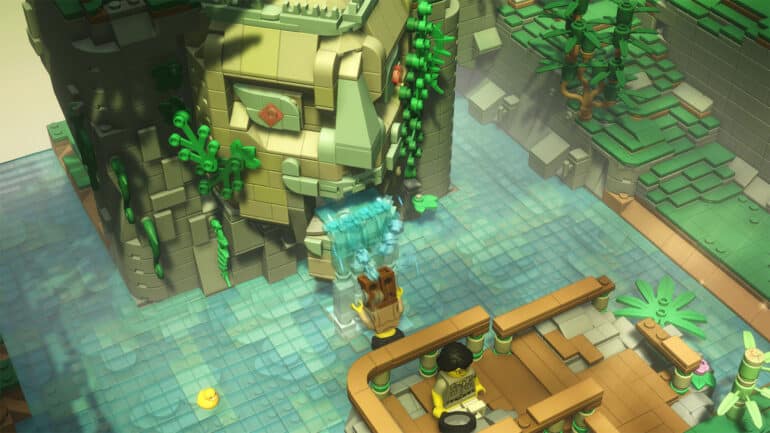 The Jungle is the first world that players will have to venture through to find a Happiness Crystal to bring back to the Theme Park and bring the park’s rides back to life. While in the Jungle, a plane crash lands nearby and the adventure also becomes a rescue mission.

In this guide, we will talk about the Jungle level in LEGO Bricktales, how to solve the builds and the puzzles, and locate the collectibles within the level.

As you first reach the Jungle, you will see a plane fly by and crash somewhere nearby. Your first task is to build a flight of stairs to proceed. No need to explore the place yet.

The first build is a flight of stairs and all you are given are a bunch of 3×3 plates with varying thickness. To solve this build, try to make the stairs in a zigzag pattern to give the steps enough space to stack up and reach the top.

Immediately after the first build, you will need to build a canopy walk, which is pretty much a bridge. There are lots of bricks to use this time, but the essential bricks are the 2×6 plates that will serve as the backbone of the build. You can put these plates up end to end to bridge the gap and make sure to fasten or sandwich the linking edges.

After building the bridge, you will be given another opportunity to rebuild the bridge through the Sandbox Mode where you will have access to more bricks and the build space won’t be as limited as before.

Continuing to the next area, you will see the Excitable Archaeologist. She will be up a tree, but the platform is not stable enough to hold your weight. You will need to create a support under it. You can build however you like it, just make sure that the two points at the platform are connected to the points on the ground.

You’ll then be given a Whip which you can use on certain areas where you need to climb up to a higher place. Use it on the nearby post and proceed to the next area.

The next area is where you will get the Smash skill which lets you break objects like bamboo. Grab it and then explore the area to grab some bananas in a treasure chest. Head back out the way you came, and use the Smash to destroy the vines holding the Snake Statue. Crank the nearby wheel to raise the statue and reveal a walkway underneath.

The next build requires you to put together the Monkey Statue. Most of the pieces are semi-built, so you just need to make sure that they are placed on the right position in the stack. Once done, use the wheel nearby to turn the other monkey statue around so that both statues are facing the same direction. Afterwards, enter the doorway.

You will find yourself in another cave. Make your way up to the top path, but before heading out the next doorway, pull the lever to the side to lower down a ledge with a chest on top for some more bananas.

Once you’re back out into the jungle, make your way to the next build area where you need to build a stairway. You’ll fist need to place the main beams into the holes and crevice of the cliff side, and then build a flight of stairs on top of it using the plates that you have.

At the top, you’ll find Boo’s Shop where you can buy cosmetics and additional bricks and brick colors that you can use in Sandbox Mode in exchange for bananas. After visiting the shop, head to the next area to the right.

You’ll get another cutscene showing the Fearful Journalist hanging on his parachute. You need to interact with the build marker for the gyrocopter first before you can retrieve its other parts. Once done, grab the propeller, and then use the whip to reach the ledge where the pilot’s seat is.

For the build, you can simply create a cockpit first and place Rusty inside it. Then, you can build the rest of the gyrocopter. Test out your build to see if it is balanced; if it is leaning too much forwards or backwards, then you will have to adjust by moving the pieces or adding pieces to the opposite side of the lean.

Once you’re on top, use the Smash near the tree to make the journalist fall down, and then follow him to the next area.

The next build will have you build yet another bridge, but this time it turns at an angle midways. Start with the base foundations using the tall bricks, and then lay out the rest of the flat bricks on top and don’t forget to fortify the links with some more bricks.

For the next part, you need to go down back to the Base Camp below by using the zipline. Talk to the journalist once again to make the build marker appear. To make this build easier, start by placing both the U-shaped blocks side by side and place the seat in between. Then build up the rest of the carriage. When attaching it to the zipline, simply do it piece by piece starting from the top until the entire carriage is attached.

The piece that attaches to the zipline can just be any 2x2s and it does not need to be secured any further since there are no other pegs to secure it on.

Once you’re on the ground, follow the archeologist to the cave to rescue the Daring Pilot. You will need to build a monkey’s tail that will hold a jewel on the end of it and make it reach the light. The catch is that the statue has to turn around 90 degrees from its starting point and there are blocks that are in the way. You can follow the build show above to make sure that the tail will be able to position the jewel properly without hitting any of the other blocks.

Afterwards, use the wheel to rotate the other monkey statue around to open the door into the next area. In here, follow the path that goes around the area, then climb the ladders to reach the pilot. You can climb further to reach another ladder that leads to a previous area where you can find a Chameleon and reveal a shortcut.

To save the pilot, use your Smash to break the plank. The next cutscene will show all three of you being washed off the area and back outside near the base camp. Talk to the archeologist once more and the Happiness Crystal will appear. Grab the crystal to bring it back to the Theme Park.

The next build does not count toward the Jungle level’s progress, but it will require you to free build three seats for the Tilt-A-Whirl ride before you can access the next level.

In the Jungle level, there are a total of 20 animals to be collected. 10 of them can be found within the first run through the level, while the other 10 will require a revisit once the necessary tools or abilities to reach them have been acquired. Check out our complete guide for the animal locations in All Animal Locations in Jungle Level LEGO Bricktales.

In the Jungle, you will find four (4) of each type of animal, with the Chameleon as the main animal for the level needed by the Passionate Biologist.

There are 10 different items on sale in Boo’s Jungle Shop and they all count towards the level’s completion when purchased. You will need a total of 250 bananas to purchase everything in the shop.