Feeling like a kid again, playing with LEGO bricks. 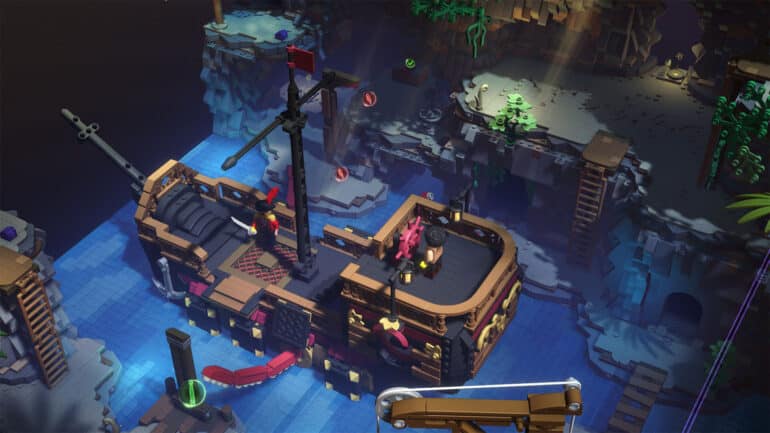 LEGO Bricktales is the newest game to bear the LEGO brand that combines adventure, exploration, and puzzle solving through different worlds in order to save a theme park from being reclaimed. The game is available on all the major platforms, making it easy for a lot of players to be able to play it. We got to play LEGO Bricktales through an early access copy generously provided to us by the publishers, and here are my thoughts about the game.

We’ll start off with the story of the game.

You start off as a minifig that you can customize from the head to the legs. You then arrive at a run down theme park that was once bustling with parkgoers. Due to its condition, it is at risk of being closed down for good. Your Grandpa will not want to let that happen, so in order to save the park, he made a lot of inventions that will help rebuild all the attractions and rides.

Your mission now is to gather Happiness Crystals throughout the different worlds to power up the transformation machine: the machine that does all the “magic” repairing. You will be accompanied by Rusty, one of Grandpa’s inventions that gained sentience when it got sent into a different world. Together, you go visit these worlds via the portal, another one of Grandpa’s inventions, and search the lands to obtain these elusive crystals.

When it comes to the overall story, it wasn’t really that deep and complicated. A riveting story isn’t really something that has been present in most LEGO games, even ones that were made by different devs. Even the progression of rebuilding the theme park felt almost flat with little to no buildup. It feels like there was still enough space in there for the story to take some turns without affecting the core gameplay.

As for LEGO Bricktales’ visuals, it took on the same approach as with Builder’s Journey on using dioramas to show a section of the world, albeit in a slightly larger scale. The plus side that Bricktales has is that everything is made out of bricks, compared to the other LEGO games that integrated non-brick elements into the levels. Personally, this uniform kind of presentation makes it easier to get into the mood of building stuff, especially when you get to see your creation blend in with its surroundings so naturally.

Another aspect of the visuals is the camera views and angles. Whenever you explore a world, the camera angle is fixed until you approach the edge of the map, then the map rotates. The game can be paused in which the free look mode can be accessed where the map can be rotated freely to get a better view. The fixed camera angle is understandably made by design as a way of bringing more challenge when exploring, though it can get cumbersome at times.

Moving on to gameplay, LEGO Bricktales has the typical linear quest structure where tasks are given in line with the story, and completing them progresses the story even further until a level is completed. This goes on level after level until the story is concluded.

As for replayability, long time LEGO game fans may be familiar with the collectible and skill mechanic where there are certain parts of a level that cannot be accessed until you get a character that has a particular skill to overcome that barrier. Bricktales also has that same mechanic where players will have to reach the final level first before they can get 100% completion on the previous levels, but it’s only presented by adding new abilities for Rusty rather than getting new characters. I’d say it’s an alright gameplay mechanic to keep.

Another point of replayability is with the builds as they can be assembled and reassembled many times. As you progress through the game, you’ll encounter Boo, an NPC who runs the shop that sells different colored and themed bricks which can be used on the builds under the Sandbox Mode. It’s up to the players’ imagination and ingenuity to integrate other designs to the build while meeting the build requirements, if there are any.

We’ll talk more about the core gameplay for LEGO Bricktales, which is building. Unlike in the previous LEGO games where a button can just be pressed and whatever needs to be built will be built via Master Builder magic, it is different in this game as each build has to be built brick by brick for most of the time.

This is where the game shines as it captured the essence of playing with LEGO bricks. In my playthrough, I went with the easiest builds I could manage since I was playing under time constraints, but there were still some builds where I was compelled to spend a little bit more time making it look better because I wanted to since I was having fun. It was a really smart move to have ClockStone as the developers for this game as they have mastered puzzle making and making players think of clever ways of how to get from point A to point B.

As for the difficulty, it’s no child’s play. Sure, the first few builds that have challenge requirements can be solved and completed without much effort, but there are some builds that got their difficulty level ramped up higher than the rest. These are usually the bridge builds where a better sense of how to interlock bricks properly is definitely needed, especially that there are no hints given on how to build stuff. There were also build puzzles that carry over into the overworld, although this only happened mostly on the final levels and I wish it was done consistently throughout the game.

If you are a parent or someone who have young kids who want to play this game, I recommend supervising them as they play. Not only would it save them from being frustrated, it can also become a fun bonding time; so long as you keep the back seating to a minimum.

One last point regarding the difficulty is within the build environment, specifically with the controls. I played the game on PC with a mouse and keyboard setup and it still took me a while to get used to the controls, especially when it comes to laying down the bricks on exactly where I want them to. There are some visual cues that can be used like the shadows underneath and the highlighted studs which made building a bit more manageable. Thankfully, brick rotation is limited to just the y-axis to keep the builds simple.

Overall, LEGO Bricktales was a fun and challenging experience for the kid in me, not just as a fledgling LEGO fan, but also as a player who enjoys these kinds of problem solving games. One of the parts that I liked the most was the cheesy and light humor that has been present in most of the LEGO games; it’s almost a part of a LEGO game’s identity and is something that I look forward to every time. It’s a game worth picking up if you want to play with LEGO bricks without actually playing with physical ones.

LEGO Bricktales – Review
Score Definition
It's a fun and challenging little LEGO game where building is well integrated with the gameplay.
Pros
Visually appealing
Being able to play with LEGO bricks without actually owning a single brick
Everything is made with LEGO bricks
Good ol' LEGO game humor
Super challenging at times
Cons
Plain and flat story
Build controls are just almost intuitive, but not quite
7
Good