If you see me smiling on a Monday morning, you’ll probably think that an alien has killed me and is wearing my skin as a disguise. Why do most people hate Mondays? When one’s weekend is cut short, no one simply dislikes Mondays. Probably because for most people it’s the start of the week, and it’s time to go back to work, and face your dreaded bosses. I think this is primarily one of the reasons why Mondays are attributed to bosses. And the reason why I’m writing about one right now is because my boss asked me to. (On a side note, I was just kidding and I don’t want to get “him” into thinking that he is my boss at any level.)

The best thing about video games is that you get to kill your boss. It’s something that we do not have the priviledge of doing in real life. The boss that I am going to talk about today is one of the first video game bosses that I have encountered as a kid. When someone talks to me about the “boss” stage of a game, the name always comes up, Bowser Koopa. I’ve brought up this name about two weeks ago and I was quite surprised that the name did not even ring a bell to a certain someone I know who plays a lot of video games. Am I that old, or has Nintendo completely lost its appeal to the current generation of gamers? 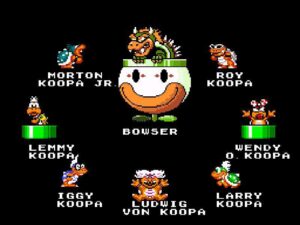 Here’s a quick overview of Bowser Koopa for those who do not know him. He is Super Mario’s ultimate villain. By ultimate I mean, he is the boss of all bosses, because in most Mario games that I have played, there were Koopalings, otherwise known as Bowser Koopa‘s children, which you have to face at every castle in Mario’s journey to rescuing the Princess Toadstool.

What makes me remember Bowser Koopa? Well, as a kid, I remember how it used to take me several days to get to his castle and how fulfilling it felt to complete every boss stage to get to the ultimate boss stage. The first time I got to face Bowser Koopa, I was honestly scared. If my memory serves me right, it was a completely black room plus the creepy background music, then Bowser arrived in what appeared to me as a floating clown vessel. It took so long for me to figure out how to defeat him then. I couldn’t hit him with my “powers”, and it turned out that I had to use the things that he threw at me to hurt him. After several retries, I finally got him to surrender and alas, the white flag!

At this point in time, even with all the high-definition modern games around, I could still play 2D Super Mario endlessly and enjoy even if I already know how it ends. Bowser Koopa will always be that ultimate villain for yours truly, the kid at heart, me.