A preview of the side scrolling Cyberpunk action game, Loopmancer. 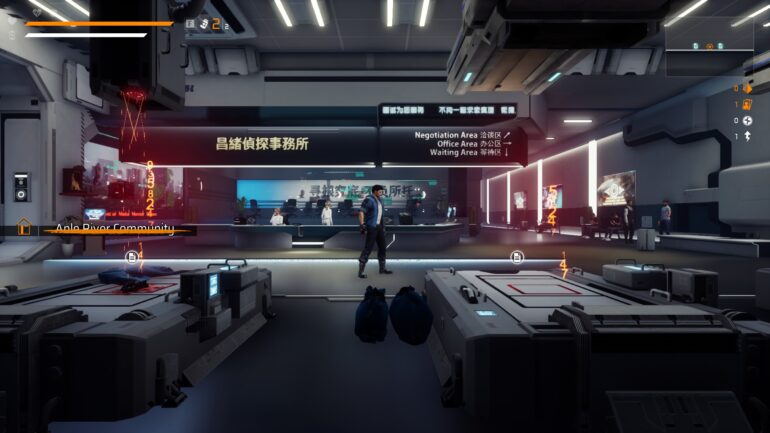 I went into Loopmancer completely blind and not really knowing what to expect. Developers of the game eBrain Studio is a relatively small indie team of 21 developers without any history of game development. Loopmancer seems to be their first real game project and I just got a chance to preview the game to get an idea of what they have in store for us.

Loopmancer is a side-scroller action game with rogue-lite elements where you play as a futuristic private eye investigating a missing person’s case. It’s a typical setup for a Cyberpunk crime thriller but Loopmancer throws a twist into it by letting you repeat back to the beginning once you die. You actually have to repeat levels as Xiang Zixu learns more about the case and uses his knowledge of the previous loop to avoid death.

What eBrain Studio is trying to accomplish is certainly intricate and ambitious for a small development team. Let me tell you what I experienced on the Loopmancer preview, both good and bad.

The first thing I noticed was how uncanny the characters were. With the brightly lit neon lights of Dragon City, it’s very easy to notice the stiff movements and lack of lipsynching in characters during cutscenes. I played the preview in both English and its native Chinese audio and both lack the performance for the mystery was trying to convey. I just couldn’t get sucked into the story nor could I find any of the characters to be interesting.

Maybe it’s the bland delivery of the lines or the dialogue that went heavy into exposition explaining the background of the game rather than giving any life to the characters in Loopmancer. There’s a real mystery surrounding the game and you even get your own evidence board to review the relationships between characters and check your progress within the story. But without a “hook,” there’s really nothing that the preview does to get me interested in the full game’s narrative.

It’s a bit too early to tell if the story will flop. This is just a preview of Loopmancer and we have yet to experience the full tale of the complete product. The biggest criticism I have of the preview is how the opening doesn’t really do anything to tie Xiang’s personal story to the missing person’s case making the investigation feel rather impersonal.

The Loopmancer preview was only really one level. However, I could re-experience that level as many times as you want. This is where Loopmancer’s rogue-lite elements really come into play. This level, LongXi Town, changes each time per loop. So if you die and come back, enemies will be positioned differently and the environment won’t be the same as before.

Combat in Loopmancer is pretty good. You side-scroll platform through the environment with a sheer focus on dodging enemy movements while continuing to remain on the offensive. It really keeps you on your toes looking out for enemy visual and audio cues for when they’re going to attack. Some attacks can be rather unfair and finish you off in a few hits as there are enemies who are suicidal and will charge at you with an explosive attack. If you find yourself caught in a bad position by happenstance, expect to wake up to another loop.

There is a purpose to fighting as Loopmancer allows you to purchase upgrades, unlock new weapons, and skills by spending the currency you collect from dead enemies or by destroying objects in the level. Some of the weapon designs are pretty wacky allowing you to unlock a giant fish or a frying fan as melee weapons.

Combat is a combination of melee and ranged attacks. You have a variety of different melee weapons to choose from each with its own stats, range, and animation. Guns are good at keeping enemies at bay but the ammunition is limited and you do need some time to reload. Loopmancer does a pretty good job in allowing you to chain these attacks together. Whenever I needed space, I would always dodge and use my guns to stagger enemies before moving in for melee. I can even set up mine to give me an opening to attack when I’m facing overwhelming odds.

Your weapons can be upgraded back in the ChangXu Detective Office however once you die, you’re back to the machete and the standard pistol which doesn’t really do a good job. I didn’t really like the fact that the weapons, throwables, and skills you can switch them out for are random in every loop. While the upgrades that you invest in stay, I didn’t want to leave things to the chance of getting stuck with subpar weapons.

Outside of LongXi Town there is your apartment. There are a variety of things you can do here such as upgrade your base stats like health, learn new skills, and even change outfits. There is an evidence board, though all it’s really there for in the preview is to give you upgrade points. I have yet to see if that serves more purpose in the full game.

Other than your apartment there is the ChangXu Detective Office where you can read up on some files, talk to NPCs, and upgrade your weapons. The preview didn’t really allow me to explore other locations but they were good enough to give me a taste of what Loopmancer has to offer in the final product.

The level designs do look pretty good. On high settings, you’ll see water reflections on the ground and the neon lit background really does nail the Cyberpunk atmosphere.

I played the preview on PC using an RX 5500 XT on medium settings. So far, Loopmancer runs pretty well without any issues and doesn’t require a heavy setup.

Loopmancer is a roguelite side scroller action game with pretty interesting mechanics. However it still needs quite a bit of polish. While I’m looking forward to what the final product has to offer, I couldn’t help but feel that the preview didn’t do much to make me interested in the story.