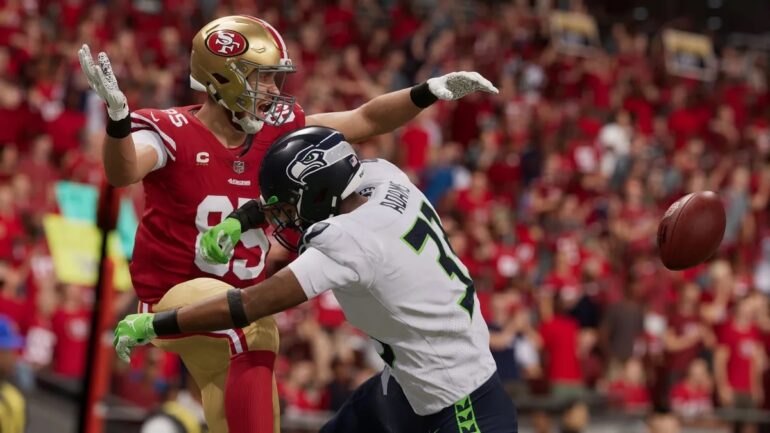 With the introduction of the new cover image for the entry, which was Coach John Madden, EA Sports finally revealed the new Madden NFL 23 gameplay system details. This time around they have revealed the all-new FieldSense Gameplay System. It offers realistic gameplay and new ways to control what happens everywhere on the field.

Hit Everything mechanics will let players disrupt on defense and stop the offense in new ways. EA Sports introduces the new animation branching tech that allows next-gen Hit-Stick physics. This allows them to get in the middle of mid-air knockouts, smash the pile to assist teammates with a tackle, blow up blockers, and force turnovers with stand-up tackles.

Players can take full control over every pass with new ways to drop the ball where only their receiver can catch it. It also adds a new accuracy reticle and a passing meter to gauge every throw.

Hit the perfect gap, plant-and-go, or evade defenders with this new mechanic. Ball carriers have more freedom and fluidity with the new system.

1v1 battles in the secondary are tighter than ever with the new wide receiver release moves and defensive back counter press mechanics.

Everything Else New in Madden NFL 23

The Franchise has been overhauled with new athlete motivations for contract negotiations. This creates more drama and tension in the free agency. Players can decide which team to pick with team location, salary demands, and more help. The Trade Logic AI has been updated to have realistic moves and values players and their worth when factoring in trade offers.

The Face of the Franchise will offer players into their fifth NFL season at their chosen skill position and when they are ready for a new start in the league. They can negotiate a one-year contract and prove their worth to be part of the 32 NFL teams by showing it on the field and upgrading their player.

Build the best roster with current NFL superstars, Hall of Fame legends, and more with even more ways to add to and improve the squad.

Madden NFL 23 launches on PC, PS4, PS5, Xbox One, and Xbox Series X/S this coming August, 19, 2023 worldwide. The game is now available for pre-order for Standard and All Madden Editions.