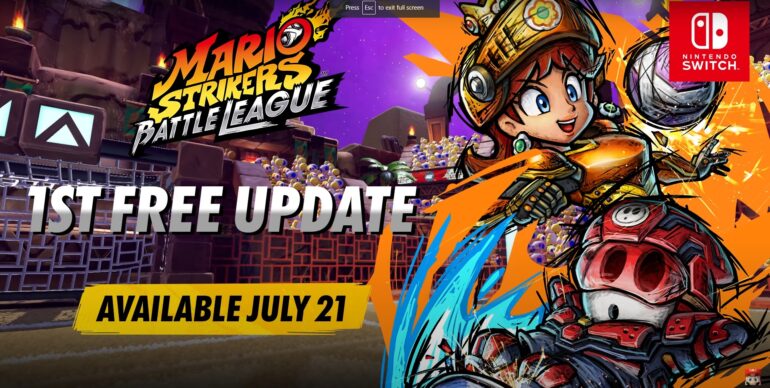 The Mario Strikers Battle League first free update is is finally coming soon and it brings with it some new content that many players might be pleased. In the update, it will have two new characters that will join the roster, a new equipment set, and more. Check out the details here.

Daisy is a Tank

The first free character that will join up is Princess Daisy, the princess of Sarasaland and a recurring character in the Mario franchise. She has very powerful stats and can be very tanky in the field, meaning she can really take on a lot of beating without getting knocked down. She is a technique type who will not get knocked down, according to the video on the latest Twitter post. She also has a very powerful kick.

The next free character that will join the roster is the popular minion Shy Guy! He is an all-rounder character who depends on his gear. The video did not confirm this but it seems whatever gear he wears; he can improve the gear’s abilities more than its regular stats. He also has a very powerful headbutt attack.

A new gear will be introduced, the Knight gear. According to the video, it will increase strength and shooting stats when a character wears it. A new stadium will be introduced too, the Desert Ruin. It can be used for quick matchers or set it as the club stadium.

When Will the First Free Update Get Released?

Mario Strikers Battle League is now available on Nintendo Switch. The first free update will be released on July 21, 2022. Two more free updates will be coming to the game before the end of 2022.