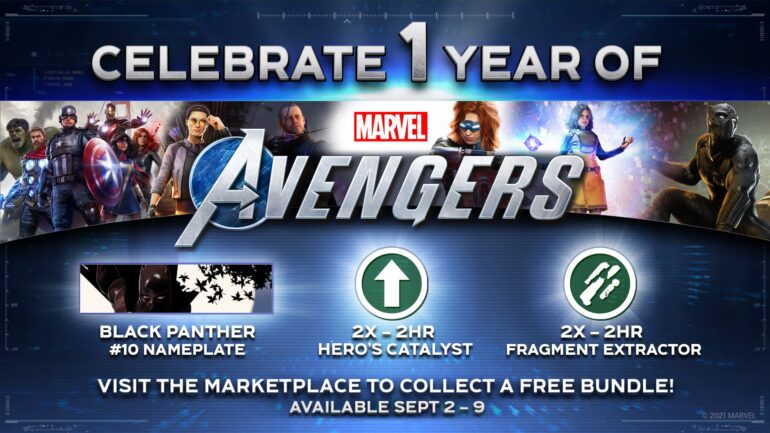 Marvel’s Avengers is currently celebrating its One-Year Anniversary and Crystal Dynamics is promising they are going to be adding some new stuff to the game. The first one on the list is free content for the game, which is the Anniversary Bundle. This will be limited until September 8, 2021, which will include a new outfit, nameplate, and consumables.

The studio has also released the new Mission Chain – 1 Year Anniversary that is limited until September 16, 2021. To complete this, they will need to finish each Campaign including the Reassemble campaign, both the Kate and Clint Operations, and the War for Wakanda Expansion. It will reward players with the new nameplate that celebrates the game’s anniversary.

There are going to be new Community Activities that will be available this week to help players in their hunt for Exotics like the Cargo Runner Synthoid. This activity offers a 50 percent spawn chance for the Cargo Runner Synthoid. Second is the Priority Mission Rush, which will grant players a piece of Exotic Gear and can be completed once a day instead of once per week for the duration of the event. All activities have already started and will end by September 16, 2021.

The roadmap has been updated and it will be shared publicly next week. This will include all of the upcoming content, old and new, for Marvel’s Avengers. A State of the Game Blog will be posted later on too, also next week.

The marketplace has been updated as well with the Black Panther Outfit being featured. The free item this week will be the Anniversary Bundle, which includes the Black Panther Nameplate 10, Two 2 hours Hero Catalysts (2x XP), Two 2 hours Fragment Extractors (100 percent more Fragments), and a free cosmetic item Iron Man’s Iron Alloy Outfit.