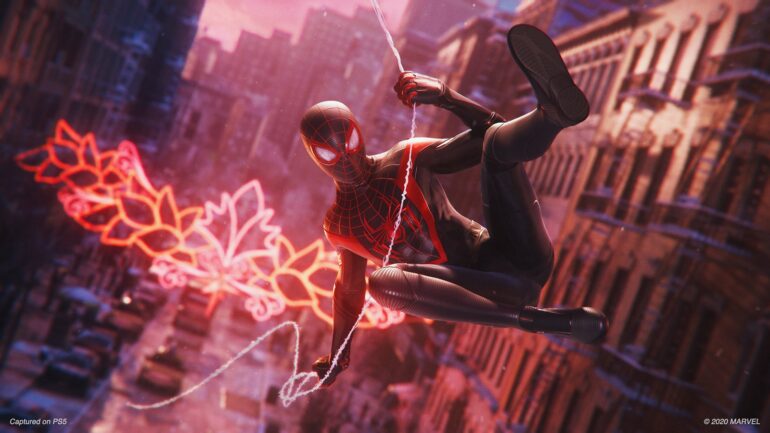 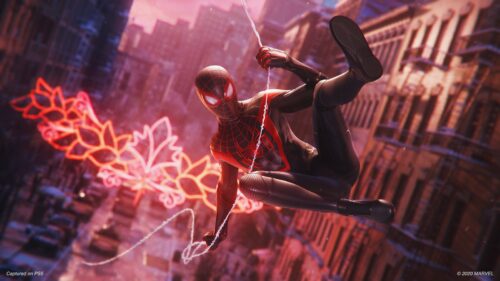 Marvel’s Spider-Man for the PS4 was a strong contender as a game of the year last 2018. Insomniac Games clearly aims to top that outing with one of today’s most anticipated entry to the superhero genre. Although Miles Morales is dubbed to not be an actual sequel, it still provides more to the table than just any ordinary expansion.

As stated in the impressions article, the first thing to notice about Spider-Man: Miles Morales is its upbeat soundtrack. There’s no doubt the PS5 version’s loading screen is nearly nonexistent, but as this has been reviewed on the PS4, load times take long. Waiting even feels longer because of the songs that play while the progress bar completes itself. They’re good enough for hands to go awfully itchy, wanting players to start swinging around New York City as the new friendly superhero in town. The remixed tracks made the start of the story feel like waking up to Saturday morning cartoons. It simply keeps the soul alive with excitement.

There’s no surprise that this game uses the new character model for Peter Parker, but a personal complaint is how he lacks the stress marks. Peter has been Spider-Man with eight years of experience under his belt, all the while juggling his daily life as a struggling millennial. So, why does his new face look like a supermodel from the heavens? While his new appearance does look more handsome, he also looks almost as young as the teenage Miles Morales. That in itself could break the immersion for some.

With that personal issue set aside, the difference between Peter Parker and Miles Morales is obvious from the get-go. Miles’ web-swinging animations are rougher than Peter’s, making it look as if he’s still getting used to being the new Spider-Man. He stumbles mid-air while trying to connect his webs from building to building. It’s this neat little piece of information, that actually makes the character feel more believable. Even details like the thumbprint on the teenage hero’s headphones.

Peter Parker was already established as a master of disguise, while Miles just goes around asking artists to draw the kid Spider-Man in graffiti alongside the old one. It’s kind of sus, really, but it’s also a way of showing how the titular character is reckless and proud of being the new superhero in town.

Through the game, Miles Morales discovers new superpowers, like his set of bioelectric venom attacks. In the first few hours, these abilities made an unfair advantage to the enemies. Later on, however, the game introduces even more types of thugs to beat, each with their own equipment that cancels out these powers. The kid Spider-Man even gains camouflage, allowing him to blend in the environment, going invisible. It’s a great way to hunt around brutes, one-hit killing them using stealth attacks.

The teenage Spider-Man also gets some new gadgets to help him on his way. There’s the holo-drones, the remote mines, and the gravity well. The holo-drones are hologram fighters which, well, fight enemies on their own. They are perfect for when Spider-Man is surrounded by more baddies than he can handle. The remote mines are perfect for stealth-focused playstyle, where Miles just hangs around on top of the environment. Throwing the mines at electrical outlets forces nearby thugs to investigate and shocks them to unconsciousness when detonated. The gravity well pulls enemies together. It’s a great way to get villains in groups, ready for a venom smash.

Morales’ new abilities and gadgets came at the right time, for Peter Parker has to go out of town for a work-vacation with Mary Jane. This leaves Miles to be the only Spider-Man in New York City for two weeks. It’s also in this span of time where Miles’ superhero persona is tested with a threat, featuring the Tinkerer. Almost every chapter has its twist, almost parallel to the events of the main first game. It’s a good way to introduce Miles Morales to the players. The game even gives Miles big movie moments like splitting a bridge in half, with him in the middle holding it all together, for the sake of the people in distress.

As good as the story goes, there are some stupid things Miles just do unnecessarily. For instance, when the power went out just before dinner with his loved ones, Miles took it as his responsibility to fix the problem. He found a solution by going out his bedroom window and powering up the electrical cabinet found outside their building. All was well and he went unnoticed until it was time for him to return to their crib. For some unknown reason, Miles decided to enter using their dining room window, instead of getting in from the way he got out. He almost compromised his secret identity as there were other people in the room – his best friends Ganke and Phin, and his mom. At this point, Ganke already knows who the new Spider-Man is, so he protected Miles’ secret life by distracting the other two with a selfie. Playing through the narrative and looking back, it’s obvious the writers kind of wanted this event to be a foreshadowing, but they could have made it more clever or more subtle.

There are new improvements to the game, including a cleaner UI, a better photo mode with external lighting options, and the snappiness of the fighting animations. All of these made the whole experience worthwhile. It’s even clearer now that the whole series is taking inspiration from the Arkham games, but they’re also taking notes on which of the mechanics worked and didn’t. Just like any other open-world game, there are bugs present. Random NPCs still levitate, chairs and tables go invisible, but none of the glitches so far has been game-breaking. Well, it’s a good thing we live in the age where developers can just update their game by releasing patches.

Long story short, Spider-Man: Miles Morales is a stellar game, deserving of a perfect score. However, it’s not without faults. Still, this new entry to the web-slinging series is what players shouldn’t miss out on. The teenage Miles Morales may be new to the superhero business, but people behind the game definitely aren’t. 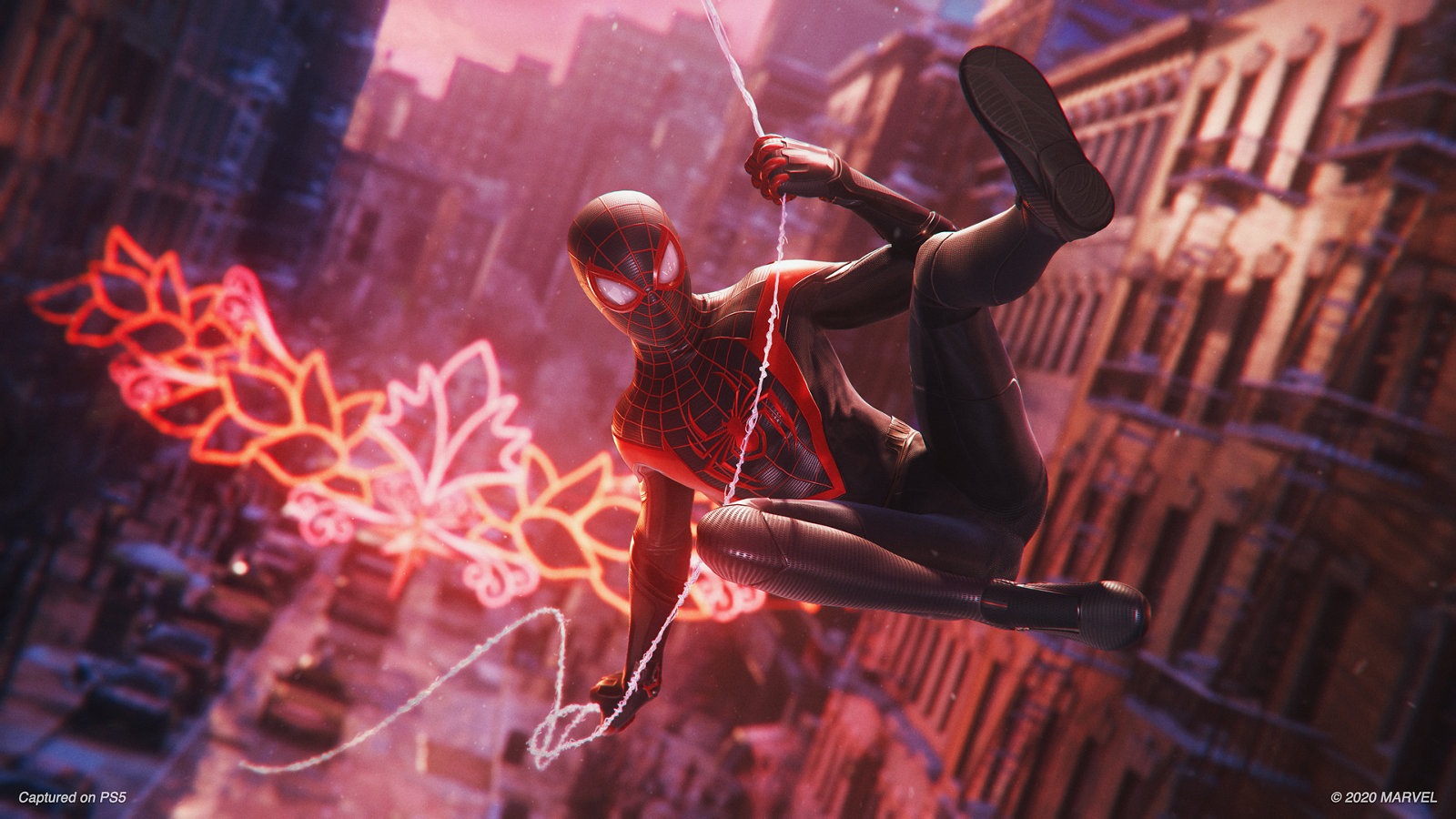 Marvel’s Spider-Man: Miles Morales – Review
Score Definition
Almost perfect if not for the nitty-gritty. If it’s quite there but not enough to push the boundaries, it’s still an awesome game.
Pros
Miles does whatever a spider can
Miles spins a web, any size
Miles catches thieves, just like flies
New lightning/aesthetics is pleasing to the eyes
Not just a mere expansion, feels like a full game
Includes big movie-like moments
Cons
Minor bugs
This one scene where the story decision makes no sense
9
Excellent