A North American tournament is also in the works 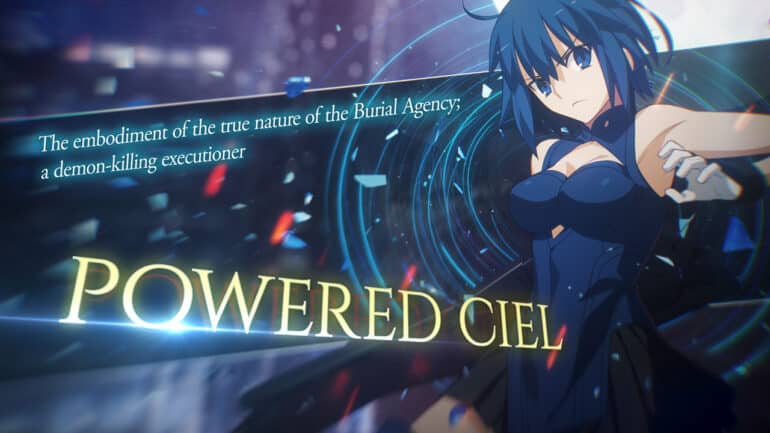 Project LUMINA has announced that it is releasing its second round of DLC for its 2D fighting game Melty Blood Type Lumina starting on April 14th, 2022. The upcoming DLC includes 2 new playable characters: “Power Ciel” and “Mario Gallo Bestino”. Both characters will have their own stories and new stages for fighters to fight on. Additionally, the update will also include five color variations and five color palette options for all characters.

The DLC will release in all regions and for all platforms, including PS4, Nintendo Switch, Xbox One, and PC (via Steam).

Ciel, outfitted to face the twenty-seven Dead Apostles and enemies in the same class, using the conceptual weapon “Seventh Holy Scripture” broken down into individual causes of death.

She makes constant use of the “Seventh Holy Scripture,” a millennium-class holy relic.
While it drains an enormous amount of magical energy, it is a viable battle style for Ciel, who has the magical power of a hundred magi.

This massive Special hits enemies with four separate causes of death, shifting through the elements of the “Seventh Holy Scripture” in sequence. This Special hits at close range, meaning its damage increases massively when used in a combo with gap-closing techniques. It also grants “invisibility” and allows you to ignore enemy attacks when activated, making it an effective counter when on the defensive.

An absolutely overwhelming Special that strikes down enemies with Ciel’s ultimate magical technique. Note the fluid animation as “Powered Ciel” moves after activation, and the dynamic effects. Each enemy even has a personal reaction when the attack hits them! This move can only be used at the cost of 4 full Magic Circuit gauges or will activate under a Blood Heat status after successfully using Shield. Use a Forced Release and turn the tables when an enemy closes the gap with you, or when your life runs low!

An acting Prelate of the Holy Church. Although he may not appear so, he holds a position of great responsibility while still in his early teens. He detests the inept and indolent and often lashes out verbally, but he is also a compassionate, dutiful person at his core.

An extremely powerful Special that takes control of “Noel” to attack enemies. Watch for Noel’s humorous expressions, movements, and spoken lines when the “Piano Machine” takes control. In performance terms, its long reach allows players to incorporate it into combos easily, or use it to finish combos and boost their damage. It also grants invincibility, making it an effective counter when on the defensive and in trouble.

This massive Special takes control of a mob of Sisters to attack enemies one after the other in a combo. Watch for the variety of attacks launched by the numerous Sisters, as well as Mario’s smooth animations and audacious smirk. This move can only be used at the cost of 4 full Magic Circuit gauges, or will activate under a Blood Heat status after successfully using Shield. Use a Forced Release and try for this Special when you want to get some distance from your enemy, or when your life is running low.

the second DLC adds two new stages, “Battle at the Threshold” and Actions in the Lower World”.

The update will also include 5 color variations and 5 color palettes for all characters. Access them from “Color Customize” mode to change your character’s colors during battles.