Everything that's coming into the game via Title Update 1 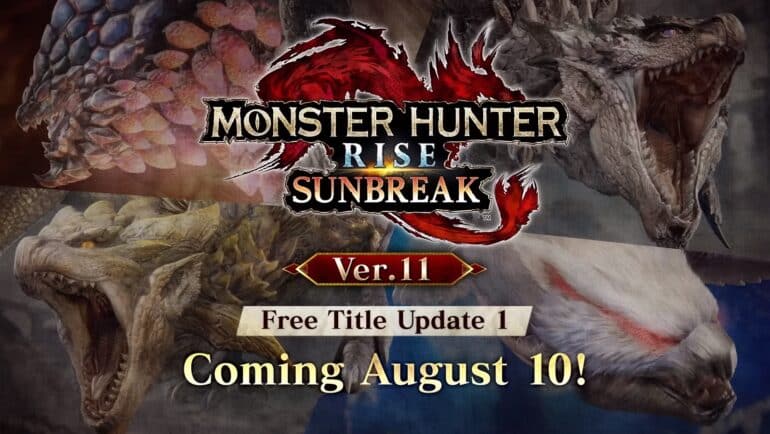 In a recent Monster Hunter Digital Event, Capcom revealed all the changes and additions it is planning to implement in Hunter Hunter Rise Sunbreak Title Update 1. The presentation was hosted by series producer, Ryozo Tsujimoto and Sunbreak Director, Yoshitake Suzuki. The duo breakdown what’s in store for Hunters in the upcoming Title Update.

You can watch the full presentation below.

An elder dragon covered with elegant silver scales. It drains the life energy of other living creatures, creeping around at night and attacking its prey from behind. Though Malzeno appears regal at a glance, it takes on a more sinister appearance after draining enough energy.

Blooodblight: Some of Malzeno’s attacks cause the “bloodblight” status. Bloodblight reduces the hunter’s natural health recovery, gradually drains their health, and decreases the amount of health recovered by items. However, when the hunter attacks a monster in this state, they will regain health proportionate to the amount of damage dealt.

A monster characterized by its massive and rigid body. Their sap-like fluids can promote plant growth, forging a symbiotic relationship with flora that grows in their bodies. They can also use that sap to harden plants or the surrounding soil, outfitting their bodies and enhancing their attacks.

An azure-colored Fanged Wyvern with an organ that chills the air it inhales, which then circulates throughout its body in a unique form of thermoregulation. It can travel long distances and endure significant environmental changes, allowing them to occupy a wide range of habitats.

Hunt brand-new subspecies as well as returning monsters from the series’ storied library of monsters.

Nargacuga is clad in radiant fur and lives in fog-shrouded lands. Lucent Nargacuga hides in the fog of the night and the glint of the moonlight, launching assaults where neither shape nor shadow can be discerned. Its astounding agility and marvelous mobility make it difficult to perceive with the naked eye. Its throng of toxic tailspikes it launches from afar makes this wyvern a perilous beast indeed.

A Bazelgeuse variant whose body seems to smolder, like it could go critical at any moment. The heat of their explosive scales has grown, their pale blue glow worthy of the “Seething” moniker. Their scales are blisteringly hot in this state, capable of scorching the very earth with their volatile forces.

A rare species of Rathalos covered in shimmering silver scales. Known as the Silver Fire Wyvern, or alternatively the Silver Sun, as inspired by their majestic appearance. These wyverns are known for their fierce breath and even fiercer claws, giving these threatening beasts exceptional combat ability. In battle, their attacks grow only more intense when in their Incandescent state.

A rare species of Rathian covered in shimmering golden scales. Known as the Gold Fire Wyvern, or alternatively the Golden Moon, as inspired by their divine appearance. These wyverns are infamous for their strong scales and attacks with their reinforced tails, giving these beasts exceptional combat ability. In battle, their attacks grow only more intense when in their Incandescent state.

The Citadel is a new locale centered around the forlorn ruins of an old castle, featuring a vast array of environments from forest-covered areas to frozen icescapes.

The Jungle boasts a warm climate and abundant rainfall, making it a paradise for the monsters and plant life that make their home there. It features rich, tree-laden greenery, expansive subterranean caverns, and relaxing waterside areas.

A giant structure, piercing the clouds, is considered to be an ancient heritage. It is clear from its pillars and ornaments that its roots do not lie in the modern age. It’s a majestic, secluded locale, where meteor showers can be seen at night, but at present, it’s a dangerous lair teeming with rare monsters.

What are Anomaly Research Quests?

Anomaly Research Quests are quests where you can take on “afflicted monsters” that have gone berserk due to the influence of the Qurio that are under the control of Malzeno.

There are two types:

Both can be accessed via the Anomaly Research Quest menu.

A research facility created by Bahari in order to investigate the Qurio and the effects they have on monsters. This is where you can get the special “Anomaly Investigation” quests, which allow you to delve even deeper into the research. Anomaly Investigations yield special rewards, which can be exchanged for items required for Qurious Crafting.

By enabling augmentation for MR armor and weapons that have been upgraded to their highest form, you’ll gain access to Qurious Crafting. It requires materials gained from Anomaly Investigations but they allow you to add new upgrades to your gear. You can customize your weapons’ stats, such as attack power and affinity, and you can randomize the functionality of your armor, which you can do as many times as you want!

New Event Quests are coming from August 18 and onward!

More paid DLC is coming from August 10 and onward!

These new items are being added as part of Monster Hunter Rise Version 11. The update will be available on Nintendo Switch and PC (via Steam) on August 10, 2022.

For the complete list of the changes coming to the game, check out our article where we cover the expansion’s full patch notes.