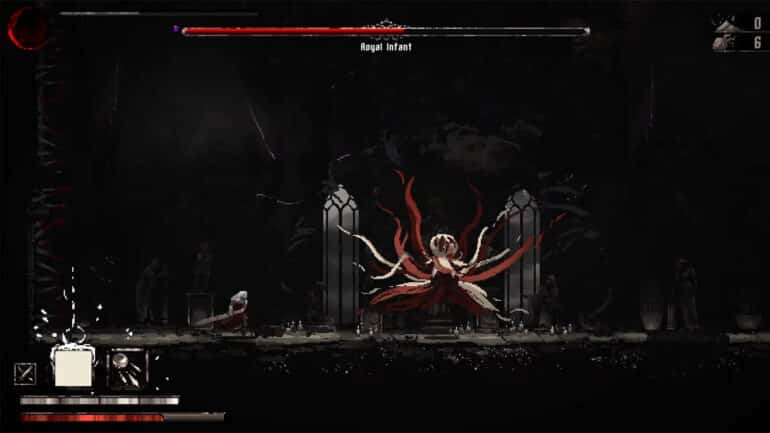 The Royal Infant is the second boss fight that players face in Moonscars. Despite being just a baby, it possesses vile demonic powers that enable it to dish out a number of hard-hitting attacks.

In this guide, we will talk about how to defeat the Royal Infant by looking at its attack patterns and knowing how to respond to them.

How to defeat Royal Infant in Moonscars

Gniewko, the Royal Infant has different kinds of attacks and has the ability to summon a clone that it can “play” with in certain attacks. It also has alternate forms once its health reaches around 60% and and 10%. Listed below are all of its attacks and how to respond to them accordingly.

In the first form, the Royal Infant appears as a somewhat normal baby with a cape and it can levitate.

Around <60% of its health, the Royal Infant transforms into its monstrous form. It will gain new attacks and some upgraded attacks. At this point, the platforms in the room will also disappear.

After defeating the Royal Infant, you will receive the Innocence achievement.

If you like this guide, be sure to check out our other Moonscars articles:

Check out this video by Tokillag0d showing the Royal Infant boss fight: