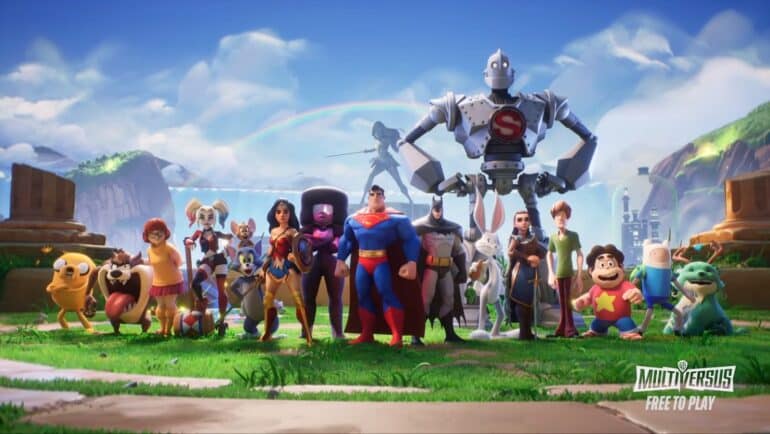 Player First Games and WB Games have recently released MultiVersus update 1.04, which adds new content with a theme of Halloween.

The newest update for MultiVersus open beta is Season 1.04 and it introduces some new stuff. One of those new contents is the character from Gremlins, Stripe. He can be unlocked with 2,000 Gold, 1 Character Ticket, or 700 Gleamium. He has two versions with the second one unlockable with 800 Gleamium.

The update moved the Free-For-All mode to a more prominent position in the play menu because the previous one was on the far right of the menu and usually hidden. Now, it is easily seen on the menu. The new Lady Rainicorn Announcer Pack was revealed and it costs 300 Gleamium.

There will be a new map soon but it is experimental. Players will get to try it out possibly at later updates. There is also the MultiVersus Halloween event that will start in a few days.

Exchange your candy in the candy shop for exclusive treats!

Exchange your Candy for Gold!

Fixed an issue where dashing to the knife on Arya traveling at a downward angle would continue to throw her at speed downwards often causing her death.

This is a stopgap measure before a larger change comes in. The fix is still in testing and since we won’t have full confidence in our solution until more testing is done, we have to push it into the next patch. The goal is to make Up Special more consistent and skill based where the opponent has control over the outcome and follow ups from Arya require a read.

First hit should drop out of the combo less

Sair 1 increased by 5 frames before Batman is allowed to cancel out of the move due to landing.

This should make intended whiff (miss) lag consistent in air or landing.

Improved reliability of Sair 2 to hit in online play.

Increased movement upwards to make this Attack more of a recovery and a more powerful attack option.

Car will no longer deal damage if Gizmo gets hit off.

Car needs to be going faster before hitting. The new minimum speed is 1400 up from 800.

Attach to same ally cooldown increased to 15s from 9s.

Air/Ground Down Attack (While In Up Special)

Piano attack while attached now takes longer to perform and has increased recovery.

Sing buff on enemies now starts to decay after 7 seconds from 5 and has a slower decay speed.

The intention is to allow the Silence debuff to apply more often. Previously we felt it was too difficult for the debuff to be applied.

Fixed a bug that was causing sticker emotes to not play on Iron Giant.

Removed ability where Iron Giant would be a wall that enemies could get bounced off of.

The number of bugs this caused far outweighed the gains.

Fixed an issue where the Silencer emote would not allow canceling out of the emote.

Reduced duration of ally save from 5s to 4s

Cooldown increased from 38s to 42s.

Previous knockback scaling was increased by 1 for each grenade shot by the same blaster shot with no limit on the multiplier. Knockback scaling is now limited to a max of 3 from no limit.

Charge damage multiplier reduced to 1.5 from 2.0.

Reduced charging multiplier on KB and damage 1.25 from 1.5.

Knockback Multiplier from being Polymorphed reduced to 1.5x from 2x.

Charged Neutral Blaster is now on an ammo system, Rick starts with 2 ammo with 1 ammo being returned back to him every 8s.

The intention of this change is to prevent extremely passive projectile gameplay.

Eye Laser tuning 3 charges up from 2 with one charge returning every 10s.

Cancels earlier on hit by 3 frames

Set dodge meter return to 9 from 6.

Fixed a bug where Velma vial could apply ice even after fighters had stopped standing in her Chem Spill.

Fixed a bug where Velma’s ice would stack indefinitely.

Cooldown on beam increased from 6s to 8s.