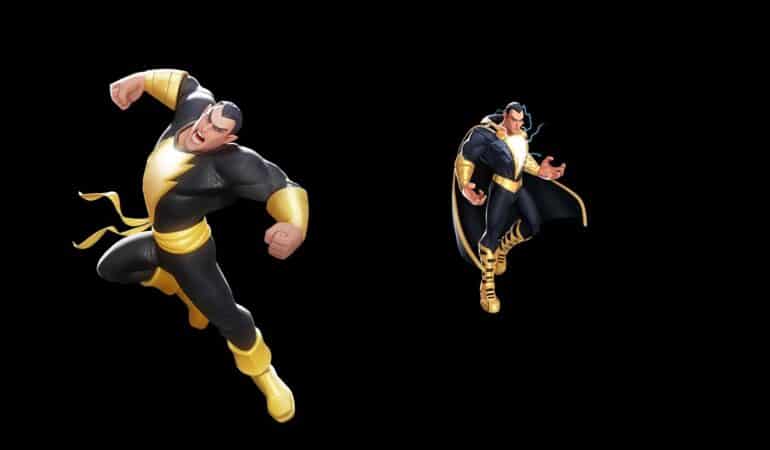 After a slight delay, update version 1.05 for MultiVersus is finally available to download on all platforms. It finally adds the anti-hero character Black Adam who comes with a Black Adam Comic Classic costume. It also adds Arcade Alpha, Silly Queue, and more. It also makes some adjustments to several characters and more.

Sky Arena has another music track!

Fixed bug where if an enemy died with the knife in them, it would remain in them when they respawned.

Branching into Side Ground Special (Grab) from landing delayed.

Reduced hit pause to 0.175 seconds from 0.3 seconds when Hammer Perk is equipped.

Fixed a bug that was preventing equipped stickers from playing.

Fixed bug where held items would appear on the wrong hand.

Fixed bug where you could infinitely summon meeseeks.

Fixed bug where enemies could dodge out of the portal and not be hit stunned.

Fixed a bug where the crystal would not be visible if it exited the arena.

Reduced on cooldown fireball lifetime to 0.5 seconds from 1 second.

On cooldown fireball no longer spawns a fire wall

Moved back land canceling by 4 frames

Stripes gun reload will now take 14 seconds but will reload all 3 shots. Any shot will reset the reload time to 14 seconds

Hitboxes on Forward Air will now not hit behind him

Leap perk reduced speed given from 50% to 35% and duration reduced from 3 seconds to 1.5 seconds

Defense Meter Return per tick reduced to 5s from 6s

Preventing falling after a successful throw

Increased base knockback on down throw to 525 from 425.

Fixed bug where Taz would not be able to eat projectiles after being knocked out.

Fixed bug where Taz could walk with an eaten enemy if he got hit right when he ate a fighter.

Increased cork ammo from 2 to 3

Fixed a bug where Wonder Woman using her lasso in air and then landing would cause the animation to not play.

Fix for ground up special floating sometimes not triggering.

MultiVersus is out now on Open Beta on PC, PS4, PS5, Xbox One, and Xbox Series X/S.