The next big fighting game has been announced! 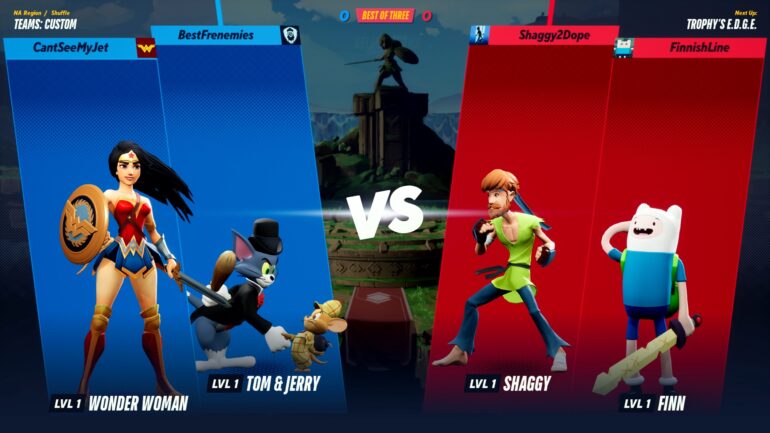 This new F2P platform fighter video game introduces a team-based 2 vs. 2 format and combines with an ever-expanding cast of iconic characters and legendary universes. This is being developed by Player First Games. This will have a worldwide release sometime in 2022 on PS4, PS5, Xbox One, Xbox Series X/S, and PC with full cross-play support, dedicated server-based rollback netcode, and content-filled seasons. Pre-registration for the upcoming playtests are now available at the official website MultiVersus.com.

The game will showcase a variety of characters from different worlds to team up or compete against in epic battles. These characters include Superman, Batman, Wonder Woman, Harley Quinn, Shaggy, Arya Stark, Bugs Bunny, Tom and Jerry, Jake the Dog, Finn the Human, Steven Universe, Garnet, Reindog, and more characters to come.

MultiVersus will focus more on online cooperative gameplay and every fighter will have a deep set of combat mechanics that distinguish the game’s fresh take on 2 vs. 2 gameplay. This allows players to customize their movesets in order to combine with other characters for cooperative gameplay. Also, Shaggy can become a Super Saiyan, the meme is now a reality.

MultiVersus will also include 1 vs. 1 clashes and 4 player free-for-all mode and only one character to come out on top.

“With MultiVersus we are creating a distinct competitive game that allows us to combine a deep roster of celebrated WarnerMedia franchises for gamers to enjoy,” said David Haddad, President, Warner Bros. Games. “We are partnering with the talented team at Player First Games to bring together a free-to-play, online platform fighter with a wealth of iconic characters that fans know and love, from Wonder Woman and Bugs Bunny to Shaggy and Arya from Game of Thrones. And this is just the beginning, as we are excited to support upcoming seasons and ongoing game content.”

“MultiVersus is a dream project for our team at Player First Games, and we’re excited to officially reveal the game,” said Tony Huynh, Co-Founder & Game Director, Player First Games. “We’ve built MultiVersus from the ground up to be a cooperative, social game that embraces teamwork and strategy. We’re also focused on providing first class online gameplay through dedicated server-based rollback netcode so that friends and rivals can enjoy a seamless competitive experience as they duke it out with our diverse roster of characters.”

The game will feature an all-star cast of talent lending their voices to the game. This includes Kevin Conroy as Batman, George Newbern as Superman, Abby Trott as Wonder Woman, Tara Strong as Harley Quinn, Matthew Lillard as Shaggy, Eric Bauza, as Bugs Bunny and Tom and Jerry, Maisie Williams as Arya Stark, John DiMaggio as Jake the Dog, Jeremy Shada as Finn the Human, Daniel DiVenere as Steven Universe, Estelle as Garnet, and Andrew Frankel as Reindog.

MultiVersus will launch 2022 as a free-to-play fighting video game on PS4, PS5, Xbox One, Xbox Series X/S, and PC.