A complete guide of leveing your Armoring Skill in New World. 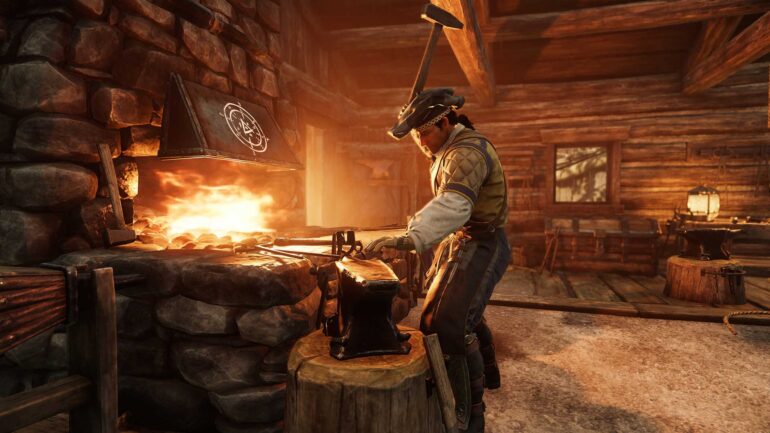 So you want to be an armorer? Well, we have just the information to get you making fishing clothes all the way to Barbarian armor.

New World takes the MMORPG genre to the next level with its in-depth crafting system. Today we will be discussing how you can best level up your armor skill with the quickest way to max level.

New World has three types of crafting systems. These systems comprise of – Gathering, Refining, and Crafting.

We will be focusing on the crafting element but will use the other two if you want to level up those.

Why Level Up Your Armoring Skill?

There are many benefits of leveling up your armor skill, primarily for having access to max level armor crafts. Additionally, the higher your skill in armor crafting is, the greater the gear score of your items. These types of armors are best for late-game expeditions and PvP content. Whereas weapons are the ‘builds’ of New World, armor acts as a support system, so having a good armor set will benefit any build you may want. Keep in mind that armor comes in three different weight classes, namely:

Heavy armor is helpful for classes that wish to tank or take a large amount of damage before dying. Heavy armor makes your character more sluggish, however, and is not recommended for agile classes.

Light armor is for more sneaky and agile classes. This armor does not block a lot of damage but allows for quick movement and faster energy regeneration. This armor would most likely be used for ranged or assassin type of playstyles.

Medium Armor is the middle class of the two; it neither provides too much armor nor hinders movement like the heavy armor. Medium armor is best used on classes that wish to take damage and be quick enough to be agile on the battlefield.

So that’s a really quick breakdown of the armor types in the game; let’s work on how to level up armoring so that you can get to the late game in armor crafting as quickly as possible.

Don’t follow anything else or worry about any other resources, just follow this guide to get you to max level in the fastest way possible with the least resources.

For levels 0-20, you will want to craft 8 linen dresses. For this, you will need:

Any workbench that is Tier 1 will be able to support this craft.

For these levels, you should focus on crafting 429 Weak Oakflesh Balm. However, you will need to find a workstation (or upgrade it by doing town projects) of tier 2 quality. These are the resources you will need to create this:

These resources aren’t that tough to farm, and the workbenches are easily found throughout towns in any major region.

Keep on going; we are almost halfway. Now you will want to focus on crafting 49 Rough Leather Coats. Just like before, you will have to find a tier 2 workbench to do this. Here are the resources required:

Focus on crafting 92 steel plate helms. You will need a tier 3 forge to craft this. Here are the necessary ingredients:

These resources are tricky to get a hold of; we recommend buying them off of the Trade Post or having friends help you farm for maximum results.

A big jump, we know, but this is the best way to level your armory skill. You should craft Starmetal Plate Boots at a tier 4 forge. For each boot craft, you will need:

Do this till you reach level 150. The reason we moved onto the Starmetal plate is due to the availability of this resource.

For the last step on this list, you want to spam Orichalcum Plate Boots. This resource is a bit more tricky to come by but still the easiest compared to other materials. Here is what you will need per pair of boots:

This recipe requires a tier 5 forge to craft.

That should be it; congratulations on hitting 200; now, what can you do with this?

In New World, each recipe comes with an option to use a more valuable resource (or Higher Tier). For instance, if you wish to craft certain pieces of gear with the regular iron ingots, your gear score will be lower than if you use a higher tier ingot. Here is an example of that:

By swapping out the iron ingots for the more rare Voidmetal, it improved the gear score rating.

This whole process is how most of your gear score upgrades will work in New World.

Azoth and How it Affects Gear Score

By adding Azoth into your craft, your gear has a chance of gaining additional bonuses. These bonuses can be broken down into:

Adding Azoth is the best way to make your gear stand out for the late game.

The Best Armor Recipe (As of Current Patch)

The last point on this list is for when you’ve followed all the instructions and gotten to level 200 in armor crafting. This gear is the big leagues, and is incredibly difficult to craft, so let it be a goal to drive you while you level up your armor crafting.

For this gear, you will be required to farm:

Each of these armors requires varying amounts of materials for each armor piece. Be sure to farm a lot of Phoenixweave for light armor and a lot of Asmodeum for heavy.

Armorsmithing in New Word is a fun experience. With Armorsmithing, you can craft gear that allows you to destroy your opponents in both PvP and PvE. We hope you enjoyed our quick guide on Armorsmithing and what you need to do to hit max level. You can check out SSEGold for some quick, safe New World coins exchanges so that you can buy those much-needed resources and get ahead of the curve, plus we also have almost a plethora of New World guides for you. As always, Happy Hunting!