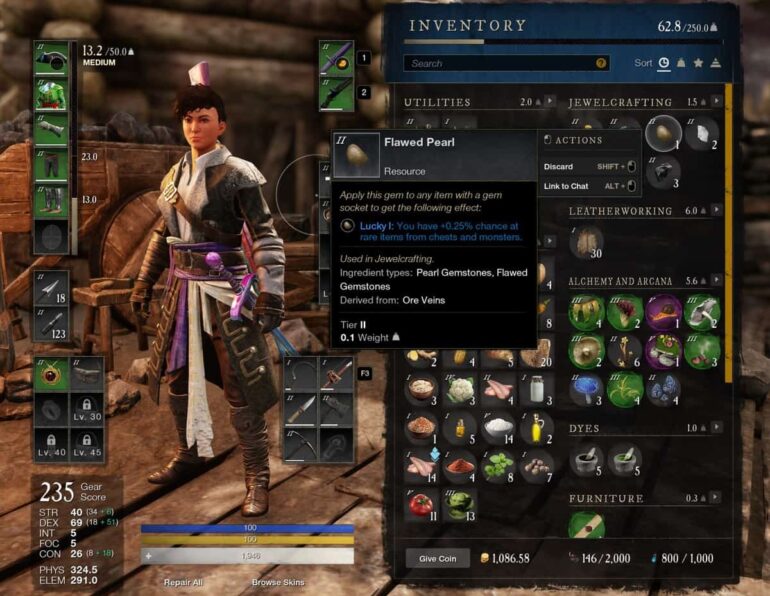 New World has many professions that players can dabble in, but Jewelcrafting is one of the most useful, making it a profession that players might want to consider committing to.

This comprehensive guide covers every aspect of Jewelcrafting Leveling in New World. We will discuss what this profession is all about, who can benefit the most from it, what other skills it requires, and what is the fastest way to reach maximum level.

What is Jewelcrafting in New World?

Jewelcrafting is the profession that allows players to craft their own trinkets such as Earrings, Rings, and many more. One of the best reasons to really get into Jewelcrafting would be to craft gems that can boost the stats of player weapons and armors.

How to Jewelcraft in New Word

To start our Jewelcrafting journey then we’ll need to be heading over to a settlement that has at least a Tier 2 Outfitting Station. Once you’ve found one then interact with it to see the Outfitting menu in order for you to see all the Jewelcrafting recipes that you can craft.

When you go about experimenting on Jewelcrafting, you may have noticed that there’s an option to add what we call Special Resources. Adding Special Resources to the mix will give your trinkets different kinds of perks. It’s also important to note that if players have an item called “Azoth”.

Azoth is a glowing blue substance that can be obtained in a number of ways. It’s required for fast travel in the New World, and you’ll need more Azoth to travel longer distances. When you use some during Jewelcrafting, you have a better chance of creating items with a higher rarity. Players can use it to get an increased chance of getting perks, though the amount needed for this depends on the Gear Score of your desired recipe.

Benefits of Leveling Up Jewelcrafting

Jewelcrafting is one serious profession since it gives the player passive buffs and allows you to craft gems that you can use on your equipment to get some boosts to your stats. Also, If you want to use some more powerful trinkets and gems then you’re gonna need to keep improving your Jewelcrafting skills.

So how do we go about improving? Well, the best way to do that is with the tried and true method of repeated crafting. Just keep crafting whatever is the best trinket or gem you can make with your skill level and you’ll reach the current pinnacle of Jewelcrafting in no time which is at the mastery level of 200 currently.

How to Level Up Jewelcrafting Skill in New World

Because the resources required are easier and faster to gather, bulk crafting flawed amulets is the most efficient way to level Jewelcrafting. There are no specific trinkets that give more XP because they all give the same amount per set, but it’s best to bulk craft low-tier trinkets for faster crafting and leveling, which you can just salvage at a later time.

If you don’t want to gather resources by hand, you can buy them from the trading post. The only disadvantage is that it may be expensive. However, you can recoup some coins by selling the trinkets you bulk crafted.

Crafting Trinkets in the Outfitting Station

You can level up your Jewelcrafting Skill by crafting your own various trinkets in the Outfitting Station. As mentioned, amulets, earrings, and rings are examples of trinkets.

Harvesting and mining are especially important for armor crafting. It is critical to level up your gathering skills in order to keep all of your resources intact for crafting armor.

New World’s Amulets are Trinkets that you can equip and provide various bonuses to many player stats. These can be found as random loot in chests and containers, commonly dropped by enemies and obtained as quest rewards. Amulets can also be made through jewelcrafting.

Rings are a type of Trinket that can be equipped in the Ring Slot and provide various bonuses to a player’s Core Attributes as well as special bonuses such as increased resistance to status effects or increased chances of crafting higher quality items.

Earrings are a subcategory of Apparel and are also commonly referred to just as trinkets. The jewelcrafting skill can be used to make earrings.

Smelters can refine a wide range of ingredients. These materials range from common metals such as ingots obtained through mining, to precious metals such as Amber and Asmodeum.

Other Skills Needed for Jewelcrafting in New World

How to Quickly Level Jewelcrafting Skills in New World

So now that we got all that out of the way, let’s get to leveling our Jewelcrafting. So we’re going to be crafting basically a lot of the same trinkets over and over again until there’s a better one we can waste our materials on.

Making amulets and other jewelry is a challenging task in the New World. To begin, you must have all of the components necessary to create a specific piece, which includes Trinket Chains, Trinket Gem Settings, and Precious Metals.

Gemstones themselves can be obtained by mining Precious Metal veins (such as Silver and Gold). It is absolutely necessary to have the Mining skill in addition to Jewelcrafting. You must use the Stonecutting Table in your settlement to create a Cut Gem from a Raw Gem.

For this method, we’ll be crafting the Flawed Gemstone Amulet a lot and it needs a silver chain and any kind of gemstone. The silver chain needs a silver setting and a silver ingot in order to craft it. To reach level 200, you must craft a total of 8591 Amulets, which equates to 8,592 of each type of item in the recipe. In other words, you may require 343,640 silver ores to meet your silver requirements.

Once that’s all done, congratulations as you’ve reached the pinnacle of Jewelcrafting. Now that you’re a master at it, it’s time to do what you’ve been wanting to do with it which is crafting the gems and trinkets that you want in order to make your character as strong as it can be.

Check out our other New World Guides: