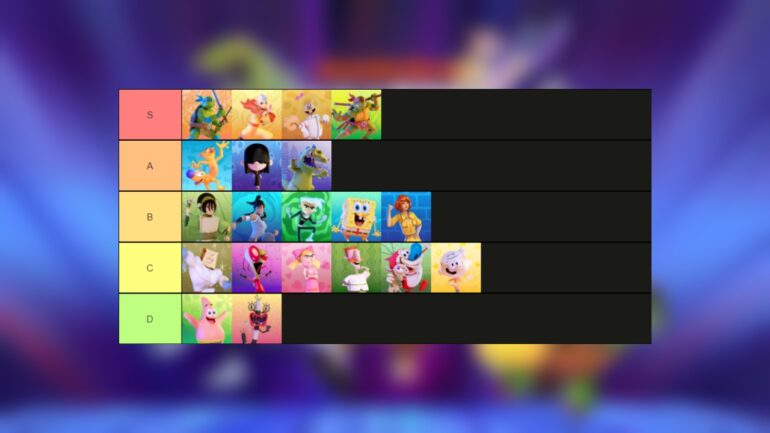 The character roster of Nickelodeon All-Star Brawl is not that extensive as of yet. There are only 20 beloved characters from various Nickelodeon shows for you to battle as for now, but the amount of fun you will have while playing is undoubtedly immense.

However, it also can’t be disputed that some characters in this game are just better than the others in terms of combos, special, and most importantly, how entertaining they are to use. That said, here is a tier list of the characters in Nickelodeon All-Star Brawl.

Is it really that surprising? Sitting among the best characters in the game is Leonardo, the leader of the Ninja Turtles. His combos are speedy and his movements are so fluid, making him very easy and fun to control.

The Last Airbender himself, Aang is a very powerful combatant and he is super easy and entertaining to use. This game requires fluidity and decent verticality and Aang most certainly offers that. His airbending attacks in the game are super satisfying to use. On top of that, his Taunt animation is just too hilarious for its own good.

Sandy Cheeks is an absolute beast in this game. Her attacks hit hard and her reach is pretty decent too. Players can abuse her melee attacks alone and they’d be able to knock opponents out easily.

The second Ninja Turtle in the game also belongs in the S-Tier. Mikey’s movesets are almost aimed at aggressive, non-stop offensive. You can absolutely give your enemies little to no time to react and breathe while using this character because of how swift his attacks and movements are. He also has a grappling hook ability that allows you to pull enemies closer to you, allowing you to land even more hits at them.

The lovable CatDog belongs in the A-Tier in this tier list. Interestingly, this character actually functions as two characters since you are able to swap between either Cat or Dog when fighting, each of them having their own movesets. His attacks can be very erratic and unpredictable, and the ability to swap between the two will allow you to knock your enemies off-guard.

Lucy Loud, like her character, is a mystical combatant. In the game, she employs three forms that you can switch and swap at your command: Normal, Ghost, and Vampiric. Her combat style is more attuned towards close combat which may turn off those who prefer fighters who have ranged attacks or whose melee attacks have long reaches, but players should definitely not pass up on this character. What she lacks with range, she makes up for in power and speed.

Reptar is one of those characters you’ll have to play a couple of times to really appreciate. He’s one of the slower fighters in the game, but his attacks are so powerful that his lack of speed only makes sense.

Toph sits at the middle of the tier list because the character seems very paradoxical. For one, Toph can be very powerful. For as long as you know how to control her, you’re almost guaranteed to knock out any opponents with ease. However, most of her attacks are also ground-based, which is antithetical to a game that highlights verticality.

Korra is a decent character. She hits hard and, unlike Aang, her attacks highlight all four elements. She’s a powerful fighter who isn’t toned down in terms of speed, and the character sounds like she could be the main of many players. However, the current problem with Korra is with her hurtbox. A lot of players feel Korra’s state in the game as of now is broken given her massive hurtbox that’s so obviously way bigger than the character herself. Once this is patched, though, Korra could easily rise to the top of this tier list.

Danny Phantom is a fun character to use, with incredible verticality, decent range attacks, and swift movements. Danny’s main caveat is his lack of reach when it comes to his melee attacks, which is odd given Danny’s superpowers in the show.

Spongebob is agile, fun to use, and his Taunt animation is sure to give you a slight chuckle. His special is a little tricky to use, though. However, once you get the hang of this character, your enjoyment level will rise through the roofs.

April is very fast and powerful. Her movesets are also very effective for the type of gameplay Nickelodeon All-Star Brawl calls for. As powerful as April is, though, she can also be knocked out very easily.

Powdered Toast Man is a character that’s very unpredictable, both to the player and whoever is fighting against it. Most of his combos are leaned towards sheer randomness and all-around insanity. Those who want to play the game for the heck of it and just to have a load of fun can definitely enjoy this character, but those who want more nuanced and rehearsed movements will find better enjoyment elsewhere.

Zim can be fun to use if you are patient. Ultimately, though, Zim’s attacks can be fairly uneventful and unsatisfying. There are also complaints regarding missing hitboxes with some of his attacks. Zim is one of those characters that obviously need better tuning for it to be really enjoyable to use.

Helga is a glass cannon character, with also considerably slow attacks, making using her a little challenging and somewhat unfulfilling. Her saving grace is the fact that her counter window is unbelievably wide.

I personally have a love/hate relationship with Nigel in this game. On one hand, his attacks can be very powerful, but they also feel very janky, almost to the point where it feels broken. Using Nigel and actually enjoying playing as him requires patience and practice, which almost sounds ironic. A lot of players may actually enjoy playing as him if they’re able to look past the clunkiness of his movesets, but I can’t see the worth of it given there are characters in this game like Leonardo and Aang who are, in my opinion, much more fun to use.

Ren and Stimpy are way too slow for a game as fast-paced as Nickelodeon All-Star Brawl. There are other characters in this game who are relatively slow as well, but Ren and Stimpy’s speed to power ratio just feels unbalanced and weak.

Lincoln is considerably swift and his attacks are easy enough to understand. The main issue with Lincoln is that he’s somewhat bland and uninteresting. He is a safe choice for newcomers but his room for growth is too low, the more time you’ll spend in the game, the more you’ll realize you’re better off turning to other, more interesting characters as your main.

Patrick is just too weak for now. Those who have played the game know how awful the character is. His movements are slow, his combos are poor, and his special is… mediocre. I love the character but I really dislike playing as him in this game, and I’m almost certain a lot of players feel the same way.

I feel like this choice is going to be controversial, but I generally didn’t enjoy playing as Oblina. The reach of her attacks is too short to make a difference, her combos are dull, and her special is uninteresting. She seems like the type of character a player would choose just so they can spam her light attack. A lot of players may disagree with me, and that is completely okay, but I just can’t find a sense of enjoyment while playing as her.