A guide on how to get Technology Upgrade Modules in No Man's Sky Expedition 7: Leviathan. 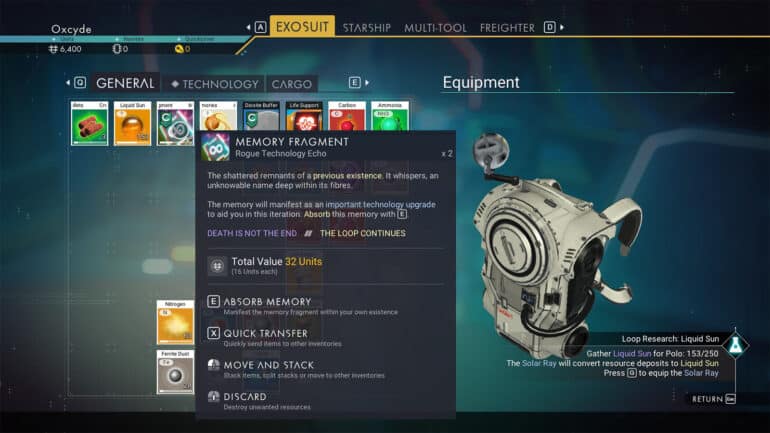 If you have been playing Expedition 7: Leviathan in No Man’s Sky, then you’re most likely aware by now that technology upgrade modules are hard to come by, especially the good ones. This is mainly because of the jacked up prices of those that are being sold in space stations, which is just a default part of the permadeath experience.

You no longer have to get frustrated over being so underkitted and easily one-shotted, Traveller, for we have gone through the expedition and we have brought back some tips on how you can easily get tech upgrades for Expedition 7: Leviathan.

We’re listing just some of the fastest ways on getting technology upgrade modules for the No Man’s Sky Expedition 7 Leviathan. They’re going to be listed following the progression of the expedition, so we encourage to go through the options to see which ones will work for you.

Memory Fragments are going to be the main source of technology upgrades in this expedition. They are usually given as rewards for completing milestones and Polo offers Loop Research missions that are repeatable and they also give them out as rewards.

By the end of Iteration 3, you will be able to craft Memory Fragments, though their quality will also be locked depending on the community research progress. Making a Memory Fragment requires these materials:

The catch with the Loop Missions is that the quality of the upgrades that you will get heavily relies on the community’s progress. So depending on when you will be playing the expedition, the rewarded tech upgrades may range from C-Class to X-Class, though you might have to wait until the final week of the expedition or so to see the X-Class upgrades.

But still, there are still some merits to be gained from doing Loop researches which we will come back to later on.

There are three Loop Research Missions that you can do from Polo that requires you to gather specific materials. Here are the missions listed from easiest to hardest:

The first two missions are almost at par with the difficulty, but you will have to consider that there are more hostile fauna present in the planets that you visit during this expedition, as compared to collecting Liquid Sun which can be done in a lifeless planet that is devoid of any other external dangers.

On the other hand, going to derelict freighters to gather Somnal Dust is the more lucrative option as not only can you get tons of Somnal Dust per freighter, you also get a lot more goods on the side.

But, the derelict freighter option is only recommended if you have at least a full B-Class upgrade on all of the essentials like shields and your weapons of choice. Otherwise, the hostile enemies inside the freighter will easily make quick work out of you, or it may take you a lot longer to clear out freighters since you will have to always hide for cover or your weapon is just too weak.

Suspicious Packets can be bought off from pirate-controlled space stations or from destroying hostile pirate ships. As long as you have a valuable item stowed inside your ship, pirates will surely sniff you out and attack you. To be quite honest, the constant pirate attack got a little annoying at some point in the journey, but that just shows how viable of a source for upgrade modules this option is.

You would want to get the Suspicious Packets that are tagged as Technology or Weaponry. Be aware that the Suspicious Modules that you get have qualities that are either good or mediocre, but you can easily just dismantle an installed module if you find a better one.

Salvaged Glass are dropped by most Sentinels. They can be inspected to get Sentinel Upgrade Modules which can also offer decent boosts to your multi-tool or exosuit.

You will eventually have to defeat 20 sentinels as part of Iteration 4, but it can be accomplished ahead even if you are just at Iteration 1, though some caution should be observed. Iteration 4’s Banished Glass milestone can provide some good amount of Salvaged Glass, too.

If you want to get Salvaged Glass early, we recommend cheesing the sentinel waves using a Trade Outpost. Locate an outpost on a planet first, and then check if there’s a nearby sentinel roaming around – there’s usually one. Before you start attacking, make sure that you also have enough sodium to replenish your shields quickly. Then, start attacking it to raise the sentinel alarm.

At this point, you can retreat to the outpost as the flying ones follow you, then you can take them down one by one. Only the shooting sentinels can drop loot, but destroying the shielders and healers will also help. You can continue cheesing them until you destroy the walker at the final wave. The walker is not tall enough to reach the central platform of the outpost, but still be careful as it can bombard you with rockets.

Despite how expensive the modules are through this options, buying them from the space stations is still an option nonetheless. Although, based from our experience where we focused on completing the milestones for most of the time, you will only receive enough nanites to buy one or two S-Class upgrades.

If you have been farming for those Memory Fragments, you can still sell the upgrade modules in exchange for nanites. You can sometimes get pre-packaged modules that sell for hundreds of nanites, but make sure that it’s not a module that you’ll need or that it’s a dupe before selling it.

If you like this Guide, be sure to check out our other No Man’s Sky articles:

Check out this video by KhrazeGaming sharing other tips and tricks on how to survive Expedition 7: Leviathan: