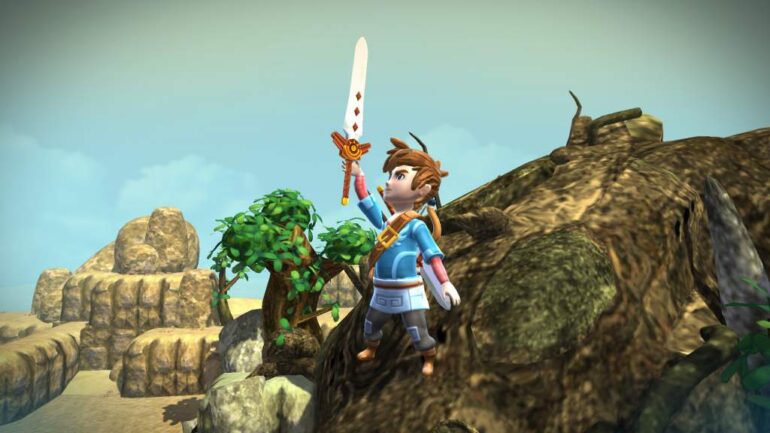 Oceanhorn: Monster of Uncharted Seas is a an action-adventure game crated by developer Cornfox & Bros. Oceanhorn is, in every step of the way, a Zelda game. From its hack-and-slash fighting and its puzzle solving gameplay, to its set pieces and equipment; Oceanhorn is basically a Zelda clone but a good one at that.

Oceanhorn sets you in the open-seas of Arcadia. Sprinkled with many islands of different environments and inhabitants. In one of those islands you wake up as the nameless hero, whos father left him to search and destroy the elusive monster named Oceanhorn. This starts the story and sets you off an adventure that will span the entire ocean. You begin your adventure in the island also inhabited by an old hermit who will teach you the basics of the game. You will soon gain access to a boat and control it by plotting a course on a map à la Phantom Hourglass. You are then tasked to collect the Emblems of Earth, Ocean, and Sun and acquire other helpful equipment along the way.

The gameplay in Oceanhorn features a mix of action, exploration and puzzle solving. Enemies appear in the overworld and you can fight them with your sword and shield, spells and other equipment that will be available as you progress through the game. You control the hero by using the keyboard for movement and for selecting your items in real-time, and the mouse for attacking and targeting. Fighting in the game tends to be a bit sluggish. The sword swings feel great but you aren’t that mobile early on. You obtain different tools/weapons and spells that help you fight monsters and advance through dungeons but most of these aren’t very effective, and most of the time you’ll just use your sword out of convenience. You also gain experience when you defeat enemies or complete certain quests. When you receive the right amount of experience you level up and receive an upgrade such as being able to hold more of a certain item, faster boat speed, heightened stamina and so much more.

Exploration in Oceanhorn is where the game shines. Other than the dreary ocean you get to explore these colorful and interesting islands, each with their own theme, environment, dungeon and locales. There are a couple of islands with friendly inhabitants that give you exposition and sell you items. The other islands, or the “dungeon islands” if you will, contain hostile creatures and this is where you’ll be spending most of your time on. These “dungeon islands” contain dungeons on where the hero must dive into to progress through the story. These dungeons either have one of the three Emblems or an item required to progress through other dungeons. These dungeons usually end in a boss fight but before these big fights the hero has to traverse the dungeons many puzzles.

True to Oceanhorn‘s inspiration, Oceanhorn too has puzzles. Not very good ones. Every dungeon in Oceanhorn has at least one puzzle. Be it using the newly acquired item or a gimmick that goes with the theme of the island. These puzzles aren’t very complex or fun to solve. Some are just too easy and some require very precise timing or control. These puzzles usually end in a key to move on to the next zone or precious treasure. There are gems that are called Bloodstones that are the games prime collectable. Collect enough of these Bloodstones to receive something from one of the locals. These are very fun to collect since most of these are hidden from plain sight, and to get to them you need to use spells/equipment.

Oceanhorn‘s graphics are beautiful and vibrant, with each island having their own tone and theme. The game looks absolutely charming as soon as you lay your eyes on the first frame of gameplay. The music is what ties most of the aesthetic together. Co-composed with long-time videogame composer Nobuo Uematsu, the soundtrack makes the areas come to life as you traverse each location.

Overall the game is a decent action-adventure, closely mimicking one of gaming’s most iconic franchises. It may have everything on what makes it a Zelda game but it didnt quite get what makes a Zelda game great, but to its own Oceanhorn is a very good game. Despite its many bugs and horrible final act, it has what it takes to be a classic and ongoing franchise. Oceanhorn lets you dive-in in its waters and it makes want to do it all over again. This is as close as we can get for an amazing Zelda-like experience on PC.

The review was based on a review copy given by Cornfox & Bros for the PC.