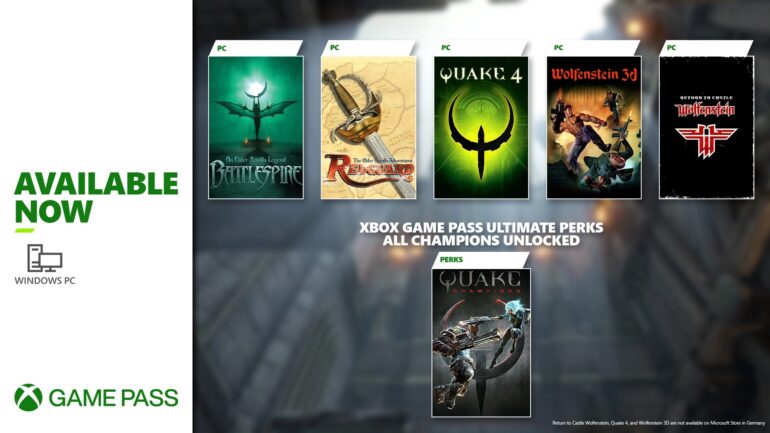 Microsoft has revealed the new PC Game Pass free games that will be available starting today.

Six titles were recently added to PC Game Pass and are now available to download. These are all Bethesda games and with QuakeCon now happening, it is the best time to make these available on this subscription service to celebrate the event.

Here is the list of games that can be downloaded today:

An Elder Scrolls Legend Battlespire – The Imperial Battle College lost contact with the Battlespire, an elite training center hidden in Oblivion. An agent sent to investigate discovers the staff dead and the gate back to Tamriel blocked. With the facility under siege by daedra, the only way out is to go deep into darkness.

Quake 4 – As part of the elite Rhino Squad, you must spearhead Earth’s military invasion of a hostile alien home world. But, in this desperate war for humanity’s survival against an unrelenting enemy, you may discover that the only way to defeat them… is to become one of them.

Return to Castle Wolfenstein – World War II rages and nations fall. The Nazis are twisting science and the occult into an army capable of annihilating the Allies once and for all. As US Army Ranger William “B.J.” Blazkowicz, pierce the black heart of the Third Reich and stop them… or die trying.

The Elder Scrolls Adventures: Redguard – Tiber Septim has swept through Tamriel, uniting its squabbling lands by force. Even the mighty Redguards of Hammerfell have come under Imperial control. Cyrus, the legendary Redguard mercenary, leads a rebellion against the Empire.

Wolfenstein 3D – World War II rages. The Nazis are planning to build an unstoppable, mutant army. On a mission to steal the secret plans, you were captured and imprisoned. Now, a lucky break gives you the chance to escape, but a maze of passages and trigger-happy Nazis stand in your way.