Persona in my Pocket? – A Persona 3: Portable review. 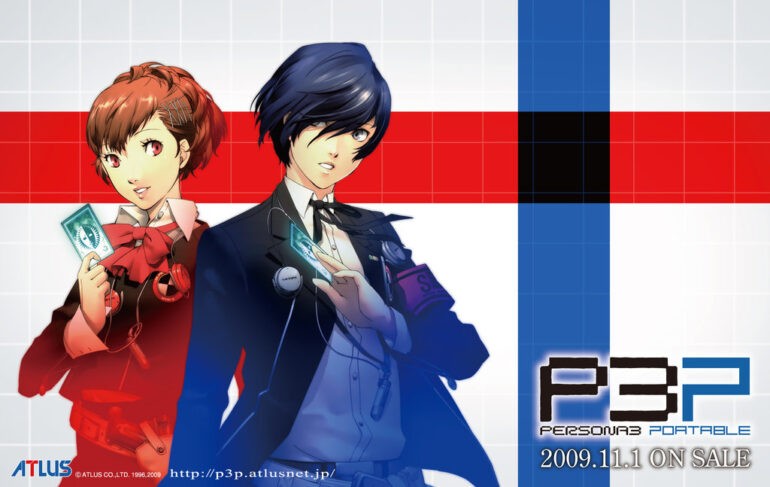 Last time, we tackled Persona 3: FES, the game that brought the whole Persona franchise to the west with it’s refreshing gameplay, catchy music, and memorable characters. Years after it’s initial release on the PlayStation 2, Atlus released an updated port for the PSP with multiple new updates and even an alternate storyline with an all new female protagonist.

Since a lot of the novel features of the first iteration were tackled in the previous review, this review will focus on the differences the PSP port has. If you want to know more about the original game, then refer to the previous review mentioned above. Does the port do the source game any justice? Stick around to find out.

The most apparent difference between the two versions of the game would be the graphics quality being somewhat downgraded in the PSP port. This makes sense because of the PSP’s hardware limitations. This change is most apparent in that the game’s overworld. The 3D walkaround segments used when exploring the city are now reduced to static images with a movable pointer for interacting with objects and people. This takes away some atmosphere from the game and give it a feel similar to that of a visual novel. This makes navigation a bit easier but really takes away some immersion from the game.

Another effect this change has on the game are that cutscenes are now rendered in the same visual novel style with the occasional still shots here and there. This really takes away from the visual experience since you don’t actually get to see them take place, but have to take the character’s word for it. Interface aside, the game also suffers with the dungeon segments having lower quality models overall. Luckily, they aren’t toned down all that bad and don’t impact the gameplay at all. If there’s any change that’s more additive instead of subtractive, it’s that the female protagonist route comes with a completely pink color scheme instead of the original version’s blue. It’s a nice touch that helps set the protagonists apart.

Despite the graphics being toned down for the sake of the port, the game’s soundtrack remains unscathed. All the familiar tracks are there and even newer tracks are present for the game’s new female protagonist route. The voice acting is also untouched which should leave players with the full Persona audio experience. Besides that, there really isn’t much different audio-wise between the two versions in the game. If you liked the music in the PS2 version of the game, then you’ll definitely like the music in the port.

In terms of the gameplay itself, much has remained untouched except for a few key factors. One change which was a carryover from Persona 4’s gameplay is that you can now manually order around your party members on their actions during combat. People who’ve played the PS2 version of the game will find the inclusion of this feature a godsend as your party is no longer at the mercy of the AI’s fickle decision making. For more hardcore purists, the option to have them be controlled by the AI is still present. This also makes the game somewhat more beginner friendly, thus making it a great place for those unfamiliar with the series to get started without being daunted by the game’s difficulty.

Another change in the game is that unlike in FES where the main protagonist is free to choose between seven different weapon types, the portable version only lets them use the one handed sword. This was also done to save up disk space once again due to the hardware limitations of the PSP.

So far, the biggest change the game has is the inclusion of an alternate story mode where you get to play as a female protagonist instead. As much as the game tries to sell this as a completely different experience, most of the game’s plot actually stays the same. What does change in this playthrough are your selection of social links. Most of the game’s male NPCs now become romance options (Yes, even the underage party member Ken if you’re into that kinda stuff), and new NPCs are also introduced as social links.

The fact that your protagonist is now female also changes the overall flavor of your social interactions. She’s noticeably more upbeat and better socially adjusted when compared to the broody and more socially withdrawn male protagonist. Her social links with the male party members also help bring out a softer side to them which helps flesh them out some more.

Unfortunately, the one thing the game doesn’t come with is the playable epilogue “The Answer”  that FES had. Considering the fact that it was just added content towards the original release version, players are still getting the full game although the choice of picking an alternate route over the definitive conclusion is still up to the player.

That being said, is the PSP port of the game still worth picking up? For those who’ve played the original PS2 version, barring a few downgrades for the sake of the port, the core Persona 3 experience is present. The graphical downgrades may put a damper on the visual experience, but the core of the game is still there. The inclusion of an alternate protagonist also helps veterans experience the game in a whole new light.

For those who haven’t played a single Persona game in their life, the PSP port is easy enough to get into for beginners while maintaining the level of challenge to keep the player from getting bored. This being a portable game, it may be hard for players to not get addicted as they can now have their Persona fix wherever they go.

While the exclusion of the playable epilogue may have had an impact in the game’s replay value, the inclusion of an alternate route may as well make up for it since it has one thing that the epilogue failed to provide, more social links. Whether it’s a fair trade is all up to the you really.

To sum it all up, Persona 3: Portable is a definite must have for PSP owners. Whether you’re new to the series or not, it’s definitely a fun game with several hours worth of gameplay. While the port may be imperfect, it still does a decent job at capturing the PS2 experience and making it a nice, delectable, pocket-sized treat. A portable port of one of the arguably most popular PS2 JRPGs, it captures the core gameplay of the original and puts it in the accessible packaging of the PSP. While some aspects had to be sacrificed for the port due to the PSP’s limitations, it’s still every bit as enjoyable as the original game. If you loved Persona 3, then you’re definitely going to enjoy the portable version. If you’re completely new to the series, then this makes an excellent point of entry.

If you liked this review, then stay tuned for more as we’ll be reviewing what is probably the most upbeat game in the series, Persona 4.