PlayStation Plus May 2022 Free Games Revealed

The earlier leak was accurate! 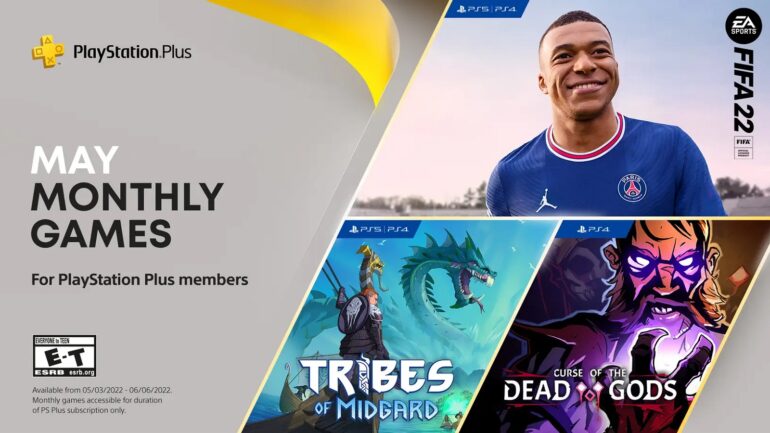 Sony Interactive Entertainment has finally revealed the official PlayStation Plus May 2022 free games.

The lineup of free games for next month has been revealed and it has confirmed the leak yesterday. May 2022’s titles will include FIFA 22, Tribes of Midgard, and Curse of the Dead Gods. Aside from the games though, there is a content pack added.

PlayStation Plus May 2022 Lineup

FIFA 22 for PS4 and PS5 – EA Sports introduces FIFA 22 that has now come close the real experience of football. Play and build the best squad with Ultimate Team, Create Your Club in Career Mode, and play on the streets with Volta Football gameplay. Play locally or online in multiplayer matches for PS4 and PS5. The latter offers amazing visuals with next-gen HyperMotion technology. PS Plus get a bonus with the FUT Pack, which includes 11 players rated 82 or above and Icon Moments Loan Player Pick.

Tribes of Midgard for PS4 and PS5 – an ARPG and survival combination with co-op gameplay within the universe of Norse mythology. Players are taking on the role of an Einherjar that Odin resurrected and will cooperate with up to 10 players to defend the Seed of Yggdrasil from the evil forces that are trying to start Ragnarok.

Curse of the Dead Gods for PS4 – A skill-based, single player roguelike game where players explore an accursed temple with a labyrinth of bottomless pits, deadly traps, and monsters. Players will collect mystical Relics and tons of weapons to make yourself powerful enough. There are curses for these relics though, which can either be taken advantaged of or become the instrument of doom

When Will These Free Games Be Available for Download?

The newest PlayStation Plus May 2022 free games will be available for download starting on May 3, 2022. On May 2, 2022, it will be the last chance to download the April 2022 free games, which are Hood: Outlaws and Legends, SpongeBob SquarePants Battle for Bikini Bottom Rehydrated, and Slay the Spire.

This is also the last chance to download Persona 5 from the PS Plus Collection. Add it to the game library in order to continue gaining access to it.