Reza got the big amount from a big fan of his. 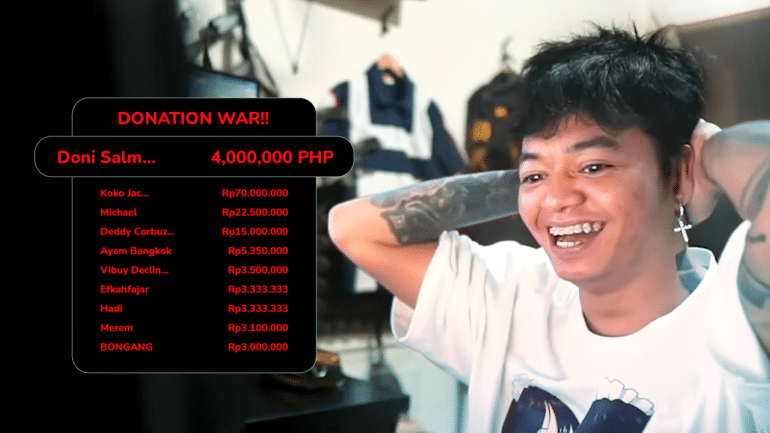 Imagine playing your favorite video game Ragnarok X: Next Generation and streaming it via your channel and just following your regular schedule as a streamer. Then in a few minutes, you suddenly get a notification that you just got a donation of an unbelievable amount. This rare occurrence happened recently with one of Indonesia’s most famous gaming streamers and celebrities.

The lucky streamer is Reza Oktovian aka Reza Arap and recently received Rp 1 billion or convert that to US dollars, about $80,000. He just booted the game on Saturday, July 3, 2021, and in just five minutes in the stream, he gets the donation notification out of nowhere. He initially got Rp 10 million from a fan named Doni Salmanan. It did not stop there though because, within 15 minutes, the fan increased it to Rp 450 million until it finally reached the biggest amount.

Reza had to reach out to Doni in order to thank him and chat a bit. It turned out that Doni was a sincere fan of the Weird Genius band member.

The number of views during that streaming episode peaked from 4,000 to 40,000 and became a trending topic across the country of Indonesia. Everyone was curious about the donator, Reza, and most of all, the game that he played: Ragnarok X: Next Generation.

Ragnarok X: Next Generation was launched in nine countries within the Southeast Asia region last month. It is based on the popular MMORPG Ragnarok Online and now it is now being adapted for mobile devices. It faithfully recreates all of the contents from the original game and brought it back for modern gameplay with new graphics and a new 3D camera. Fans and newbies can check out the classes, monsters, cities, and locations on a new platform.

This new version of the MMORPG is now free-to-play with tons of rewards for those who continue to play for a longer time. It also has a lot of events to join where players can earn free diamonds and powerful items that can help them in their next adventures.

Ragnarok X: Next Generation is now available on iOS and Android, perfect for a streamer and fan of the original. For more details about ROX Summer Carnival and GvG Battle, click here.