Revisiting the Kingdom of Loathing 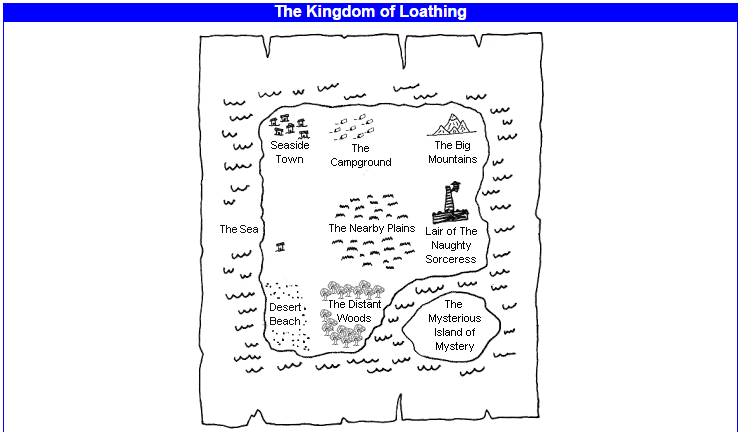 “An adventurer is you!”

It has been years since I last visited this game and played it religiously. I heard this game from a friend almost a decade ago and I got curious. It was the time when our internet connection speed was maxing at around 256 kbps and being a browser game, speed didn’t really matter. At first, it felt very surreal; the images were badly drawn sketches, like they were made by a 3-year-old but the humor was deep and mature. It had so many pop culture references, most of which were missed by my young mind. There were also a lot of innuendos that were, again, missed by my innocent self until I got old enough to realize and when I got to visit its dedicated wiki. In time, I grew fond of it, especially with its unique sense of humor. There was a time when I played day in and day out, waiting for the next rollover to start another day of adventuring.

The Kingdom of Loathing is an online browser, adventure and role-playing game which lets players go on adventures, fight monsters, save the land from the Naughty Sorceress, and drink booze, just to name a few. It became a cult sensation for a very select crowd and is still alive and gets updates, thanks to its devs and the active support of its community. Players get to play as one of the six classes; Seal Clubbers and Turtle Tamers who are known for their strength and toughness, Pastamancers and Saucerors who practice the mystic gastronomic arts, and Disco Bandits and Accordion Thieves who steal stuff while busting sick moves and funky beats. Seeked out by the Council of Loathing, adventurers go on several quests to ultimately defeat the Naughty Sorceress. There are a lot of side quests along the way which can help speed things up or just serve as a temporary distraction. There is only a limited amount of turns per day but it can be replenished by eating food or drinking booze or just by simply waiting for the next day when it rolls over. 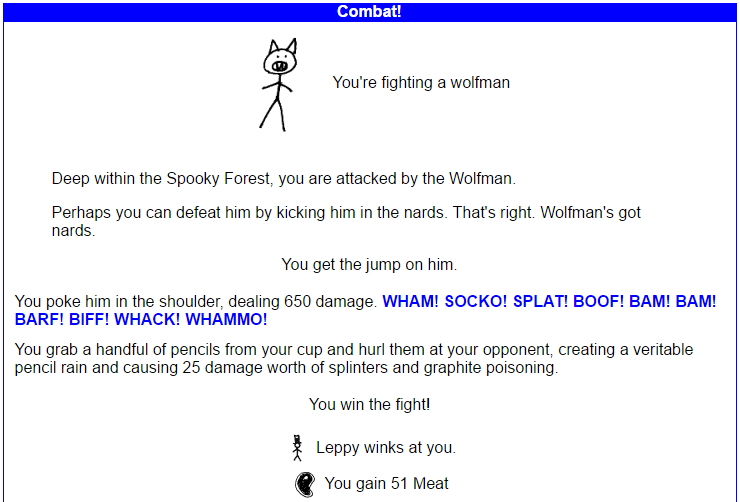 After finishing the main quest, adventurers have the choice to stay in the land for a bit longer or ascend into the next life and basically start the whole thing again. The next run can be played following an ascension path which has a specific set of rules and restrictions that adds up a challenge. The more restricting the ascension path is, the longer a run may get but the rewards will be worth the added effort. Every ascension lets players keep a certain skill that they may use in the next run. All items collected from the previous run will be made inaccessible and kept in a storage facility until the run has been completed or opted out from. It’s a slow progress in the beginning but it gets easier every run, especially that you get more familiar with what is going on and what would be the next steps to take. It is repetitive, but that is how the game works.

Back then, I was part of a clan with members that were also fellow Filipinos. Playing became easier and more fun. I got advice and tips from them and I was able to go on special clan missions. Despite the new acquaintances, I still preferred to play independently most of the time. And then it came to a point when everything felt like a chore. I guess it was a good two years or so since I first played in 2007 after which I went on a hiatus. I was a high school student back then and preparing to enter college so I didn’t have the leisure to play that much anymore.

Then I tried to revisit the game and I got hooked again. By that time, it was already 2013 and I was a few months away from graduating college. A lot has changed and it took me a while to familiarize myself again with how the game worked. Thanks to an automated script, which was pretty much legit and not considered as cheating by the community, I got to play it on the side while doing other things. I also got serious with speed running to get permanent skills. The automation also helped me grind and farm a decent stash. Everything went well, that is, until school stuff got in the way again. Enter the second hiatus. 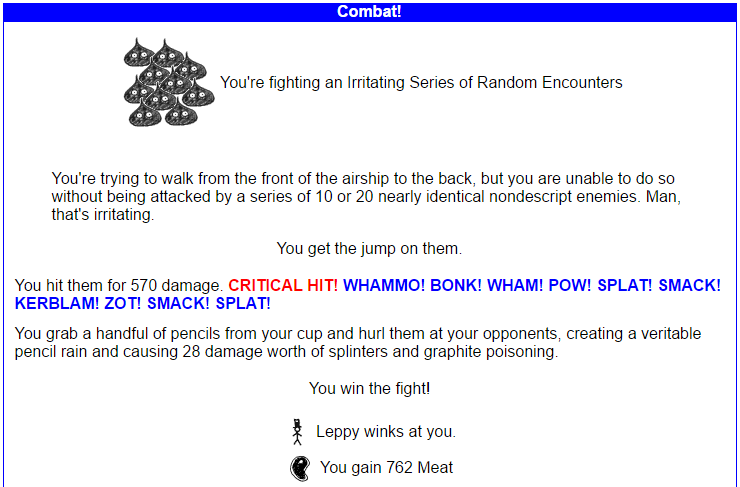 It never appeared on record but I think from 2013 until the present, there were days when I revisited the game and set up the automated script again but it never really lasted a month. From what I recall, I was trying to remember the password to my mule account because it was the account that I used mainly for farming but to no avail. The account is still there but I could not remember the email I used for it, therefore I could not recover nor reset its password.

Fast forward to the present day, I just found out that the game got itself integrated into Facebook. So I tried it again. With some luck, I was still able to get in with what I recall to be its password. It’s still the same familiar game but with a lot of new content. My adventurer is still like how I left it the last time I logged in. I know it’s still the same game with the same interface (I still have to work out how to make the chatbox visible with the current interface it has in FB), but I also am aware that there’s a lot that I missed. At least I still made it in time to do the Crimbo quest, the equivalent of a Christmas event. 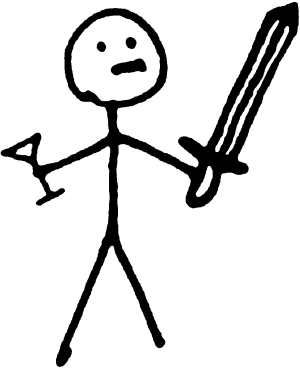 But it was just not the same as it was before. One of the first things I did when I got back in the game was to visit my clan headquarters. Sad to say, but it was already barren. The clan coffer was still full of loot, but the most recent post in the clan boards was made in 2015. I can imagine myself entering the clan headquarters as my adventurer, seeing nothing but an empty house with furniture covered with a thick layer of dust. It felt very lonely. There was really nothing much I could do since I was just a member and didn’t really have much privilege to use the clan features. I could go raid the clan coffer, but it felt really useless. I might try to shoot a message to one of the members who got the clan leadership since he’s on my FB friends list, luckily. Maybe I could usurp the leadership and get the clan for my own – that is if he can still access his account; and even that is uncertain. I just might decide to leave the clan and search for an active one.

I still am trying to regain my bearing in the Kingdom but I’m still undecided on whether I should pursue adventuring or just leave it once and for all. For one, I now have access to a payment card so that I can purchase the premium stuff and finally contribute to the game that contributed a lot to the development of my twisted sense of humor and entertainment during my growing years. But I’m still having second thoughts on spending on a game which I might not even play for long. Perhaps, I’ll try to set up the automated scripting tool again and have it run in the background until my character reaches the level where I’ll get an achievement trophy and then ascend to start again from the beginning. The revisit, all in all, gave out a bittersweet feeling. For now, I’ll give it a month or two to check if I would still be able to stick to playing with it or not.