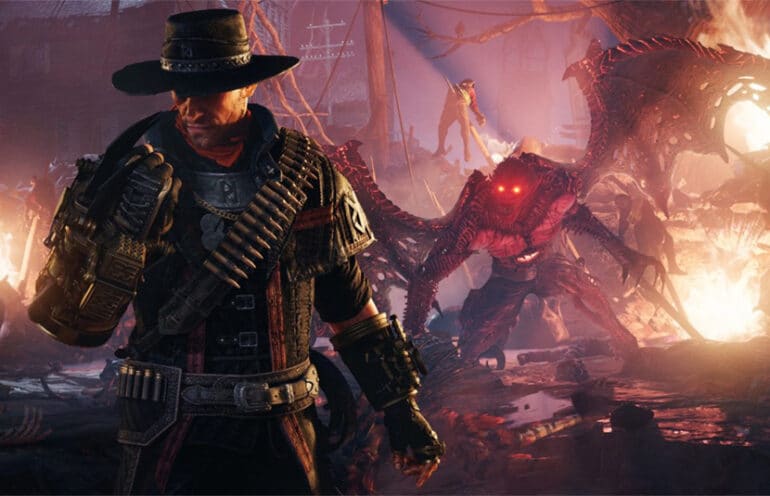 The term Role Playing Game has changed somewhat over the years. At least when it comes to the AAA scene. Nowadays, you can make any first-person or third-person experience, slap on RPG-like mechanics like leveling up and skill trees, and you can that game an RPG I’m not saying that it’s wrong but it just goes to show how times have changed. We’ll see about that. Here on our list of Top 15 upcoming RPGs 2022 and beyond, we take a look at the RPGs we’re looking forward to that are coming out this year and sometime in the future.

Some games are closer to the textbook definition of RPGs while others are more modern takes on the genre. Nonetheless, we think all these games deserve a shoutout at the very least.

Mystery horror RPG Pocket Mirror is getting a remastered version called Pocket Mirror: Goldenetraum. The game is coming to Steam with new visuals, features, and a new ending for players to discover. Of all the underrated releases coming out this year, we think this one deserves a shout-out. Plus, it has anime visuals and JP music, that’s always a plus here.

INFINITE GUITARS is a rhythm RPG game but that’s not the only thing that drew us towards this title. It’s also set in a world devastated by Mechs. As if the music’s not enough to pump you up, there are life and death battles against mech too. The trailer’s combat looks like a mix of RPG elements and Quick Time Events. Which can be the best thing or the worse thing about the game. Regardless, this is something worth checking out.

Demonschool has the potential of being a sort of Persona set between the demon and humans worlds with a dash of Disgaea’s combat system. The trailer shows us four students doing student things – fighting the possessed and talking it up in the local bazaar. The Steam page says we can build relationships with 15 other characters. Assuming it’s in our best interest to save their souls from eternal damnation, do we plead with them or knock some sense into ’em like the badasses that we are? We’re inclined to go ahead with the latter.

As an Action RPG, Hunt the Night is an exhilarating rush of near-misses and precision aiming. The demo we played last year was a solid couple of hours of action ending with a Dark Souls-like encounter with a Giant Demon Wolf. It’s a good thing that our character Vesper is a weapons master. We hope this game gets officially announced sooner than later so we can get to the task of avenging the dead and making the forces of darkness pay in blood.

We here love our Zelda-inspired games, and Hazelhut Bastille does enough to capture the look and feel of the green-capped adventurer’s world while being something completely their own. But we think it’s the boss fights shown in the trailer that ultimately sold us on the game. If the fight against these baddies is half as good as they look, we may have something here.

No Place for Bravery

No Place for Bravery is a 2D top-down action RPG that is both brutal and gorgeous. At the core of it all is Thorn’s tale of making up for something that happened in the past and doing right by what’s left of his family. Aside from the story, we’re also looking forward to seeing more of these high-quality pixel graphics throughout our adventure. (An eventful one, we hope.)

Made in Abyss: Binary Star Falling into Darkness

Made in Abyss is a dark anime. It may not look like it from the outside but the amount of EMOTIONAL DAMAGE the series has done cannot be understated. The show’s brilliant is what I’m saying. If you have the will to hold back the tears, then go ahead and watch it.

As for the game itself, it fits right into the world very neatly. It even features some characters from the anime. Fans definitely wouldn’t want to miss that. But as a gamer, you may definitely like the challenge of the game’s survival mode: Deep in Abyss. If that’s not your speed, there’s always Hello Abyss mode, a retelling of the anime’s story.

When it comes to Little Devil Inside, there are two things that stand out the most: the game’s art style and the narrator. As for the latter, we wonder if Billy is from another world as he doesn’t look quite the same as the people in this world. But that’s just us. As for the narrator, we’d love to have him narrate our journey page by page until the very last. That would be the cherry on top of the cake.

Forspoken is definitely one to watch out for because of the game’s sense of fluid movement. Unfortunately, it was recently delayed… again… and we suspect it had something to do with God of War: Ragnarok’s release date confirmation. Still, as much as it sucked to hear about the delay, we ultimately think that the delay was a good thing. It gives the game some more time to really get that polish in. And goodness knows after what’s been happening with Square Enix over the last couple of years, they really need this win.

Can we all agree right now that Hogwarts Legacy wins “Best in Special Effect“? Maybe not, but it looks like a contender to us. The game takes many elements from the beloved series like the castle and the spells but is in a time that’s far removed from the events we are familiar with and thus ensuring that the timeline remains unbroken.

The amount of exploration the player is capable of doing inside and out of the school is staggering. And the fact that we need magical creatures like hippogriffs to get around should give you a hint at the scale of the world.

Sword and Fairy: Together Forever

Some of you might not have heard of Sword and Fairy: Together Forever and wonder why it is so high up on our list. It’s simple really – the game is gorgeous and if you want more proof than that, just look for videos about it on Youtube. Heck, check the game out on Steam (called Sword and Fairy 7 there.)

As you can probably tell by now, the game is a long-running series in Asian markets, and only now has it been gaining momentum in the West. So much so that Western Audiences are getting the latest game on PlayStation consoles this August. Nothing else much to say, really. Check out the stylish combat, I guess?

Straight from a “What if” story, Showa American Story is described as a love letter to 80s Japanese pop culture and the B-Movies that inspired it. Follow Choko across the United States on her quest for revenge (ala Kill Bill, we hope) and the truth behind the mysterious zombie outbreak.

Although we largely consider the zombie fad to be done and over with, this game coming out as it is can scratch the itch of players looking for the next Dead Rising-like experience. And hopefully, it has some surprises up its sleeve.

This game belongs on our upcoming Souls-like list (and a top 3 entry at that). But the timing was off and the game was announced a couple after the article’s been published. Regardless, it is an Action RPG so it stays on this list. At least until next year’s list.

Wo Long: Fallen Dynasty is a dark fantasy centered around the Three Kingdoms period. In this game, players must fight off deadly creatures and enemy soldiers through the use of martial arts. Apart from the refreshing combat, the game’s also being developed by Team NINJA, of Nioh fame. With them at the helm, we can expect a more active take on the Souls-like combat.

Asterigos: Curse of the Stars

Coming in at number 2 we have Asterigos: Curse of the Stars. Now, this game has a little of everything thrown into the mix. It’s got light soul-like combat with plenty of ways to change weapons to suit your playstyle. The game features a fully explorable city with many optional areas for players to dive into and get lost in. It also has collectibles aplenty, that’ll keep completionists occupied for a while. And finally, the game has a branching narrative depending on your choices throughout the game. If you’re looking for a complete adventure experience, this could be what you’re looking for.

Flying Wild Hog knows how to do action games. They made the Shadow Warrior games and a bunch of stylishly action-focused titles. Unfortunately, this year’s Shadow Warrior 3 and Trek from Yomi did not wow audiences and critics. Here’s to hoping that third time’s the charm and our Vampire Hunter can do better.

With visceral combat and polished visuals, Evil West takes the top spot on our list. It may not be as chaotic as something like Shadow Warrior (we don’t about the second game) but its pacing is perfectly suited for a third-person action game. Now, if there’s something more to this game than its combat, then we’ll be truly impressed. Oh, and there’s going to be 2 player co-op ala Dead Space 3. (Without the MTX)

And that’s our list for the Top 15 Upcoming RPGs 2022 & Beyond. Admittedly, it turned out to be more combat-focused than what we were expecting. But we wouldn’t have it any other way. Action RPGs are all the rage these days. And we’re sort of glad that traditional RPGs are making a home for themselves in the Indie scene.

Well, that’s it, that’s all! See ya soon on our next list!

And go check out this video from YouTuber Tensor Gaming where they talk about the RPG games they are looking forward to in 2022, 2023, and beyond.