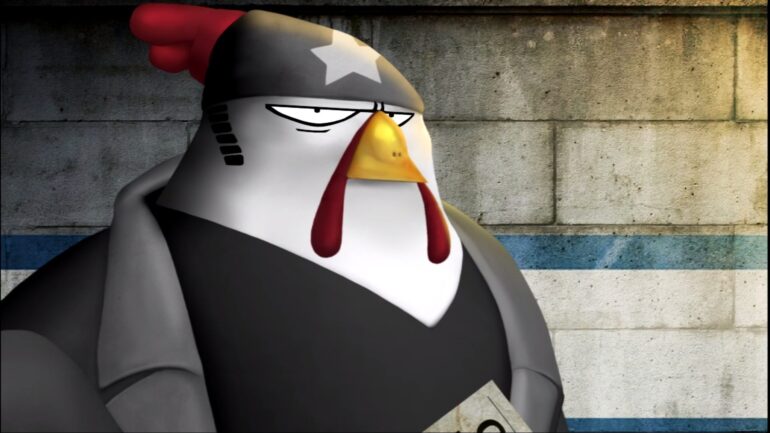 Rocketbirds 2: Evolution is a game clearly made as a type of parody to most action movies. Your protagonist is Hardboiled Chicken, a commando chicken who has made it his mission to stop Il Pulitski, the penguin tyrant.

The game’s plot is similar to that of a cheesy B-rate action movie you’re out to stop Il Pulitski but just as you manage to beat him (again if you played the first game) you discover that he’s being protected by G-men with Arnold Schwarzenegger accents. The plot continues to move in this manner. The game clearly doesn’t take its story that seriously and it’s filled with these funny one-liners throughout your run. A particularly funny moment for me is near the start of the game – where Il Pulitski is talking to one of his soldiers about beating down on the intruder, only to realize that it’s you and tries to hide it from his soldier he had that already died. 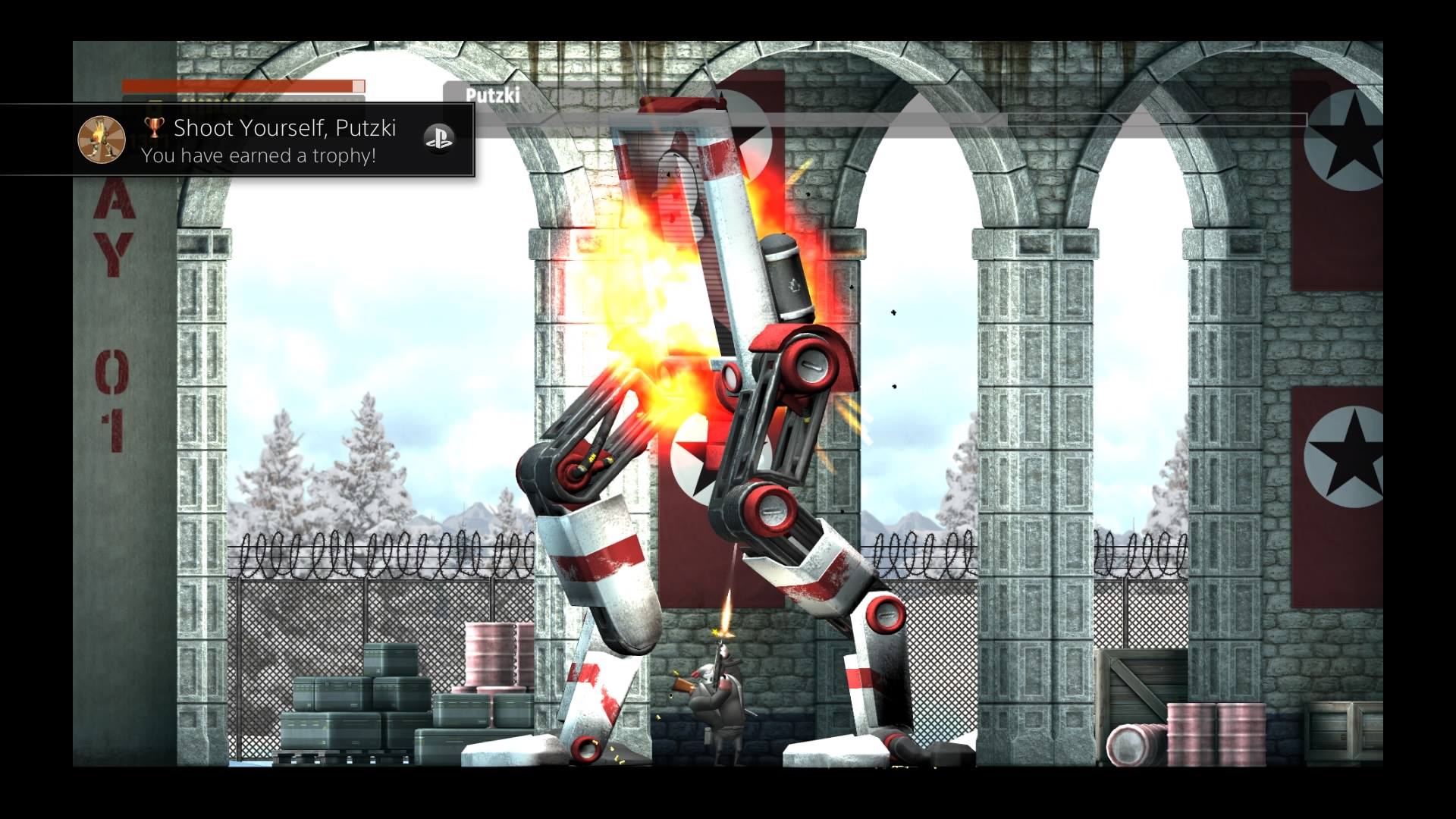 Gameplay wise, the game functions as an arcade shooter. You move your character with the left analog stick and aim with the right analog stick. You jump with the X button and change weapons with the D-pad’s up button. The game is simple enough. You go through various areas fighting off waves of enemies, moving around to dodge their fire while firing in turn until you reach the boss of the chapter. Each boss having some special gimmick to make the fight just a bit harder than normal. An example would be the aforementioned G-Men, whose gimmick is creating a shield in front of them while periodically teleporting. The normal enemies, on the other hand, function normally enough they shoot at you while firing at you, similar to what you do. And just as you are equipped with a variety of weapons so are they. From the melee mooks wielding stun rods, to the RPG wielding mooks who can take you out with one good shot.

There are a lot of weapons in the game. It allows you to freely choose what you want to use as there is no shortage of ammo within the game. At one point, I had 3000 bullets for a gun that only fired one bullet at a time, and the game works if only aiming was just a bit easier. A major problem I encountered with the game is how hard it is to aim your weapon. Given the game stage’s 2 dimensional nature, aiming relies entirely on the right analog stick – meaning it fires at the point where you’re holding the right analog stick to. And given the nature of the analog stick, the ease movement of the stick leads to an appallingly low accuracy. My solution to this was simply to concentrate on dodging and just keep firing. This difficulty doesn’t break the game but it certainly affects its enjoyability. 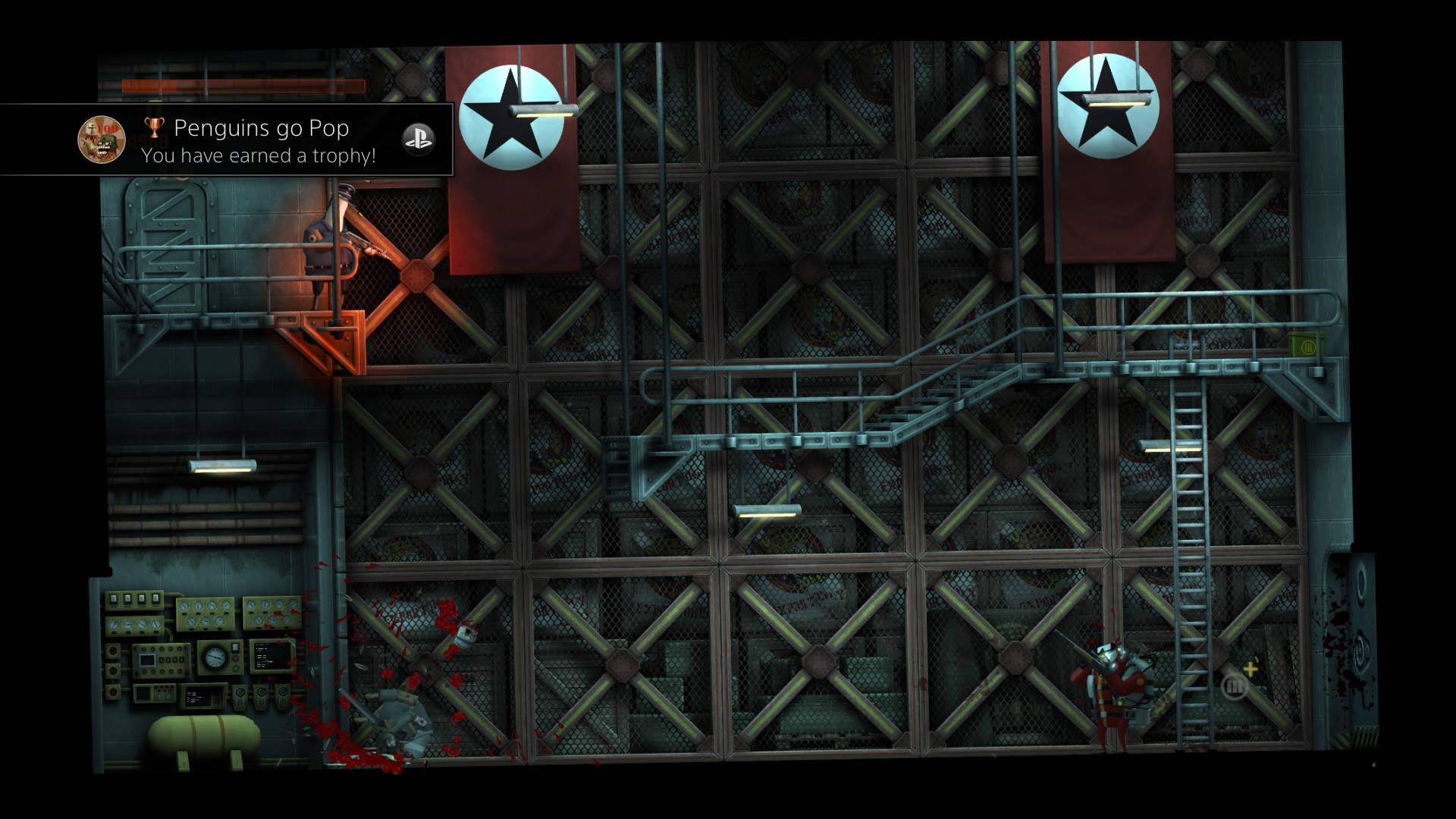 After you go through the main story, one can continue playing either through replaying the story or through Rescue mode. Rescue mode can be played offline or online, it allows you to create a customizable chicken to use in missions where you need to rescue individuals while going through familiar stages. The mode allows you to access all the weaponry in the main game at the cost of in game currency. And is clearly meant for cooperative play. Dying in this mode gives one a window period to be revived by an ally. And this cooperative play increases the games replayability respectably similar to how games like Metal Slug does so.

Graphics wise the game is nothing impressive as it seems to suit more handheld consoles or even smartphones. The games vocal soundtrack is however impressive and quite engaging.

Overall, Rocketbirds 2: Evolution is a good way to spend some time. Simple but fun. Combat combined with its co-op mode make the game a solid title. However, the games wonky aiming system and the visuals catering to handheld gaming makes me rate the game lower than it should be.