Smash undead skulls and team up with sexy ninjas! 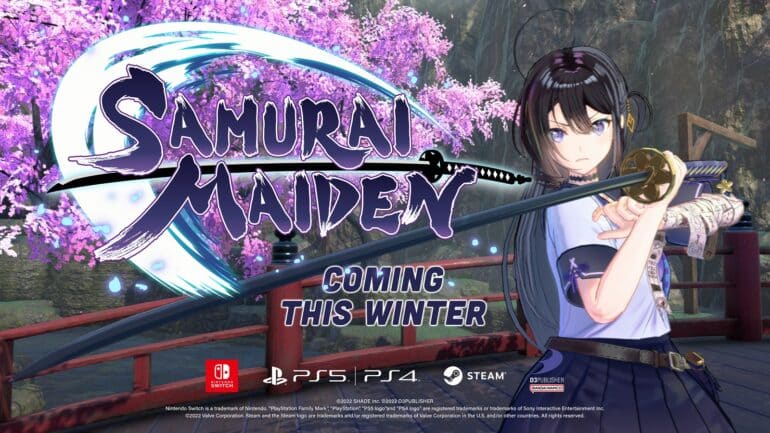 The game that D3Publisher was teasing a while ago has finally been revealed and it is literally called Samurai Maiden. It will be launching sometime in winter 2022 for PS4, PS5, Nintendo Switch, and PC via Steam.

The story goes that student Tsumugi Tamaori got summoned in her sleep to the historic Sengoku period. She must not team up with her new friends and use her amazing sword skills to defeat the undead evil that has appeared at the smoldering Honnoji Temple. Also, she wakes up together with the first great unifier in Japan, Oda Nobunaga, at the temple.

Tsumugi has trained in the art of sword fighting as a hobby, but it turns out she has a use for it in the era she got pulled into. She must now step up and finally put an end to this undead calamity that has plagued Japan.

Slaughter Undead with Sword in Hand

Players can look forward to slaughtering mobs of undead enemies with Tsumugi’s powerful swordsmanship. She uses stylish combination attacks and strong counters, but as a student from modern times, she is not capable of fighting her way out of the underworld.

The Gokage Team Up with Tsumugi

Tsumugi is not the only fighter in this game as she meets three friendly ninjas at the temple known as The Gokage who decide to join her in braving the underworld. The Gokage is comprised of Iyo, the hardworking ninja with a variety of tools, Hagane, the older ninja with a mechanical body, and Komimi, a genius with a unique Jutsu.

Players can use the Gokage system which allows them to use a rapid combination of Tsumugi’s sword style and The Gokage’s powerful ninjutsu. They can also unlock special abilities, which can be done by locking lips. They need to build trust first before they use these special unified abilities in battle.