Sea of Thieves Legend of the Veil Voyage Guide

A guide on how to do the Legend of the Veil Voyage in Sea of Thieves. 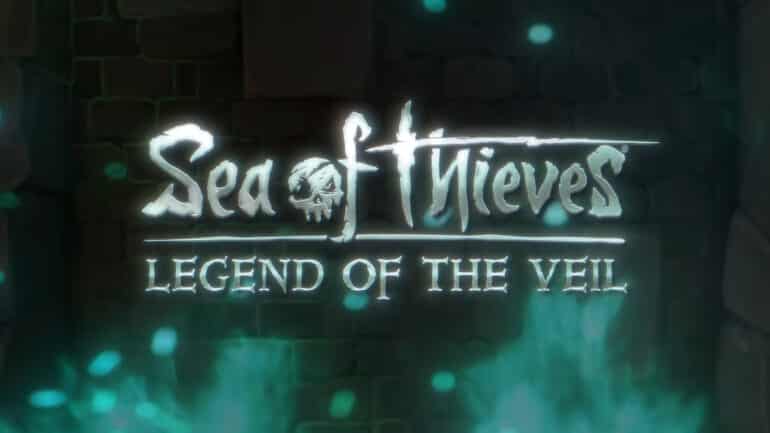 Legend of the Veil Voyage is the newest voyage added in to the latest update of Sea of Thieves. This voyage will put players into different kinds of puzzles, explorations, and challenges in order to find the missing Veil Stones to complete the Veil of the Ancients, an artifact known to open a doorway to the Sea of the Damned. There will also be loads of treasure and reputation to be gained from this voyage which a lot of players will surely be interested to get.

In this guide, we will talk about how to complete the Legend of the Veil Voyage, more importantly, show how to do the different quests that you can encounter within the voyage.

How to Get the Legend of the Veil Voyage

The Legend of the Veil Voyage can be purchased from the Pirate Lord in the Athena’s Fortune Hideout. Athena’s Fortune is only accessible to players who have reached the title of Pirate Legend. The voyage costs 250 gold.

If you are not a Pirate Lord yet, you can still experience the Legend of the Veil voyage by joining someone who is a Pirate Lord as their crew as they go through the voyage.

How long does the Legend of the Voyage take?

The Legend of the Voyage can take between 30 to 45 minutes depending on how thorough you and your crew will be at getting all the treasures you come across, and how fast you will clear the final Haunted Sea Fort chapter.

The Legend of the Veil Voyage is divided into three chapters where the first two chapters will be randomly selected from a list of smaller challenges. The third and final chapter will always be a naval combat challenge.

At the end of the voyage, players can collect plenty of loot and treasure that can be sold for hefty sums of gold, as well as tons of Emissary Value that will sure to boost you up to the top of the Leaderboards.

Not only that, but if the ship is raising the Athena’s Fortune Emissary, simply picking up the treasures related to Athena’s Fortune Voyage during the Legend of the Veil Voyage will increase the Emissary Grade to Grade 5. This will give a 150% bonus to any rewards, reputation, and emissary value that the crew will get moving forward.

Players can expect to reach Grade 5 right around the second chapter of this voyage, and since the voyage is repeatable, the next Legend of the Veil run will yield higher rewards thanks to this bonus.

Start the Legend of the Veil Voyage

Talk to the Pirate Lord in Athena’s Hideout and purchase the Legend of the Veil Voyage from him for 250 Gold.

Once you and your crew have voted on doing the voyage, the Pirate Lord will appear and give you the Quest Book which contains the chapters or challenges that you will need to accomplish. The first two chapters of the voyage will be chosen at random among one of the challenges below:

How it works is on the first chapter of your voyage, you will either have to do one of Sudds’ Island Puzzles, Belle’s Haunted Island Challenge, or the Shipwreck Graveyards Challenge.

For example: your first chapter requires you to get the Veil Stone from the Shipwreck Graveyards. Your second chapter will either be an Island Puzzle given by Sudds, or the Haunted Island Challenge given by Belle. The third and final chapter will always be the Haunted Sea Fort Challenge.

As mentioned above, the challenge for the first chapter will be chosen at random and will be different on every Legend of the Veil Run. The person or location that you will have to locate will be hinted at in your Quest Book.

Below are the mechanics of every puzzle or challenge that you will encounter for the first and second chapters.

This is one of the Island Puzzles that you will get from Sudds. This challenge follows the traditional treasure hunting activity where you are given a zoomed-in map with a spot marked with an X. This will test your knowledge and familiarity of the several different islands in the game in trying to match which island has that particular part shown on the map.

You can take clues from the layout of the land, the rock formations, as well as the foliage and greeneries, if there’s any. Also, the map will always be oriented with the North at the top part to make the navigation less complicated.

Once you reach the spot marked with the X, all you need to do is to dig the spot and you will eventually find a treasure chest containing some loot and a Veil Stone.

This is one of the Island Puzzles that you will get from Sudds. Unlike in the Zoom Maps challenge, you will be given with only two pages containing several sketches of locations. The page on the left shows landmarks serving as hints as to which island the treasure lies, while the page on the right shows a sketch of exactly which spot the treasure can be found.

Once you find the island based from the sketches from the left page, locate the exact spot marked on the sketch on the right page, dig down, and you’ll find a treasure chest containing the Veil Stone.

This is one of the Island Puzzles that you will get from Sudds. In this challenge, you are given a map of an island which is marked with several different symbols. Your objective is to visit the island and go to the spots marked by the symbols to personally see and inspect if the symbols showing on the map match the symbols drawn as rock paintings on the island.

In this challenge, you will visit and island and talk to Belle who requests your help in locating a Veil Stone. In order to find it, she will give you a lantern that lets you see special braziers scattered across the island. With the lantern, you must also light up all the braziers in the island to reveal the Phantom that holds the Veil Stone.

As you light the first brazier, all the other braziers in the island will shoot up a beam of light up towards the sky for a few moments. You can then use these beams to locate where to find these braziers. Unlit braziers will also emit pulses on the ground which you can simply follow by locating where they are coming from.

In order to see the braziers, you must always have the lantern equipped and on hand. Also, if you find a beam of light, but you do not see a brazier, it is possible that the brazier is located underneath the ground within a cave.

In this challenge, you will have to sail to a shipwreck graveyard in a certain part of the sea. You’ll know that you are in the graveyard once you see a flock of seagulls flying over it.

Dive down towards the first shipwreck, the Grim Fortune, to find a locked door leading to the captain’s chambers with a treasure chest in it. You must then find the key that opens this door within the other shipwrecks in the area.

While searching within one of the shipwrecks, you will find a journal that has logs that will help you locate which shipwreck has the key in it.

Once you find the right shipwreck, search for the key by interacting with every possible interactable object in every level of the shipwreck, may it be opening drawer doors or even looking underneath tankards. After finally finding the key, go back to the locked door and open the treasure chests inside. One of them will contain the Veil Stone.

After you obtain the first Veil Stone, check your Quest Book and you will find the clue to your next challenge. If you’ve done either Sudds’, Belle’s, or the Shipwreck Graveyard Challenge for the first chapter, then you can expect that the second chapter will be one of the two remaining ones.

Obtain the Third Veil Stone from the Haunted Sea Fort

The final chapter will always be a sea battle involving a haunted fort in the middle of the sea. The haunted sea fort’s location can be seen as a huge swirling tornado which will make it visible to anyone looking at the horizon.

As you approach the tornado, three smaller forts or emplacements will appear around it. These smaller forts will continuously spawn aggressive ghost ships until they are destroyed. These small forts can be destroyed by firing cannons at them five times, after which you can search on their ruins for treasure or something that you can use against the main fort.

Once all of the three small forts have been destroyed, the tornado will dissipate, revealing the main fort. You must then fire three cannons on each of its towers to completely destroy the main fort. Once it’s done, you can go up the island where the fort was once standing and you will find a bunch of treasure chests, one of which contains the final Veil Stone.

Be careful about other players who might also join the fray as the massive tornado can be seen from far away and other players can easily join in as an ally or an enemy.

On the other hand, you can also raid someone else’s Haunted Sea Fort and take the final Veil Stone from there. Putting this Veil Stone on your Veil of the Ancients will still complete your Legend of the Veil voyage, regardless if one of the stones were stolen from other players.

Place all the Veil Stones on the Veil of the Ancients

Placing all Veil Stones on the Veil of the Ancients will complete the voyage and the Pirate Lord will appear to congratulate you for completing it.

About the Veil Stones

Once you get a Veil Stone, you must immediately put it on the Veil of the Ancients to prevent the possibility of losing it in the case that you die. All stones that have been placed on the artifact will remain since the artifact will be tied to your ship throughout the voyage.

How much Gold can be gained from the Legend of the Veil Voyage?

The amount of gold that you can get from doing a Legend of the Voyage run can run upwards from 80,000 to 120,000 Gold depending on how much of the treasure you get and bring back with you. On top of that, you will also gain around 60,000 Emissary Value.

During the voyage, you can expect to see the regular kinds of treasures and treasures that are exclusive to the Legend of the Veil Voyage:

The repeatable nature of this voyage and the amount of gold and emissary value that you get for a short amount of time makes the Legend of the Veil Voyage as a decent rewarding activity that players can spend their time on for farming.

If you like this Guide, be sure to check out our other Sea of Thieves articles here:

Check out this video by xxDAMRONxx showing the Legend of the Veil Voyage Complete Guide: