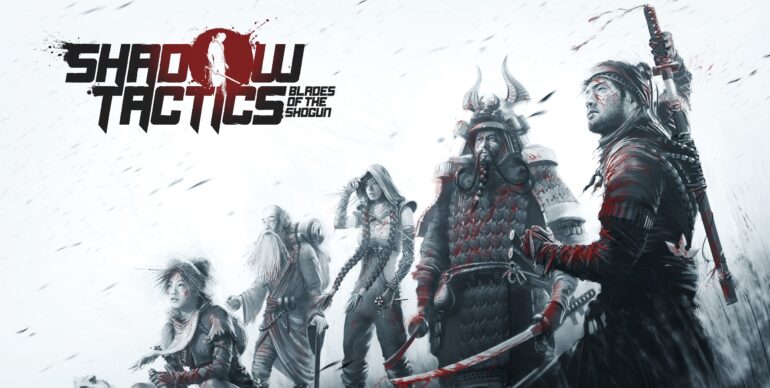 As a hardcore tactical stealth strategic game, Shadow Tactics: Blades of the Shogun surely lived up to its branded title. This game surely took me by surprise, and the game itself offers more than what you think only has. It ain’t just your typical ‘click, move, attack’ type of tactical strategic game, as it also forces you to take the path of stealth due to its elements. It has several other features in it that’s been properly combined to make a game this enjoyable and fun (and also a bit frustrating by a lot of times).

The game is set in Japan’s Edo period. It begins with the siege of Osaka to end the enemy Shogun’s tyrant rule, giving birth to a new rule led by the new Shogun. Peace then settled in not long after the war, but chaos started brewing again in the now peaceful country of Japan, when a rising threat, Kage-sama, started to stir up some trouble. 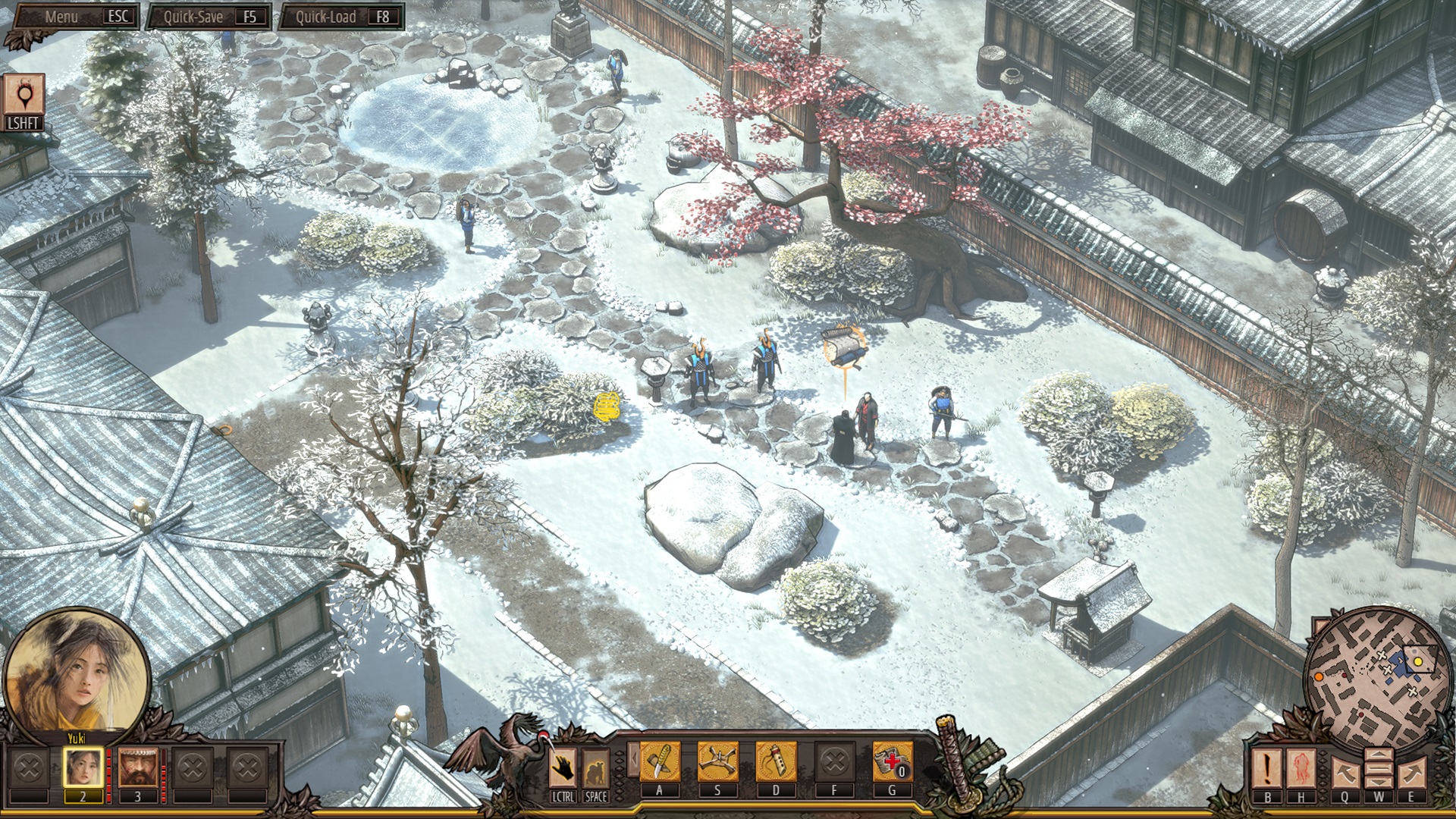 The main characters then were given the task to investigate who Kage-sama is, and what plans he has to invoke harm in the country. Now, you get to take control of 5 different characters in-game. You either play as Hayato, a shinobi who only cares about the money he gets from the job, Mugen, the goody-two-shoes samurai, Yuki, a young girl Hayato met during a mission with promising talents the same as his, Takuma, an old man with peerless marksmanship skills with his cane-rifle, and Aiko, a beautiful yet deadly kunoichi who uses camoflauge as her main tool to deceive the enemy. The different characters you can use in-game have different abilities as well, though some have similarities (but I guess it’s justified, judging what their roles are in-game).

First, let’s talk about the game and its elements. The game isn’t fast-paced, but if you’ve come to master the enemy’s movements, their view-cones (depending on what type they are), and behavioral patterns, then you can make a level look like a walk in the park — that being said, an average person would probably have already played a level countless of times in order for them to achieve that kind of feat… which is kind of difficult, to be honest. Or maybe it’s just me.

You can either manually do things by clicking on an enemy and killing him, or plan out your attacks with the help of the “Shadow Mode”. In Shadow Mode, you let the different characters you use in-game to carry out a command all at once, making it easy for you to take down multiple targets, and objectives, at once. The game teaches you its basics by showing you a tutorial guide on what to do, and how to do things, depending on what situation you are in by picking up glowing scrolls on certain parts of the map. 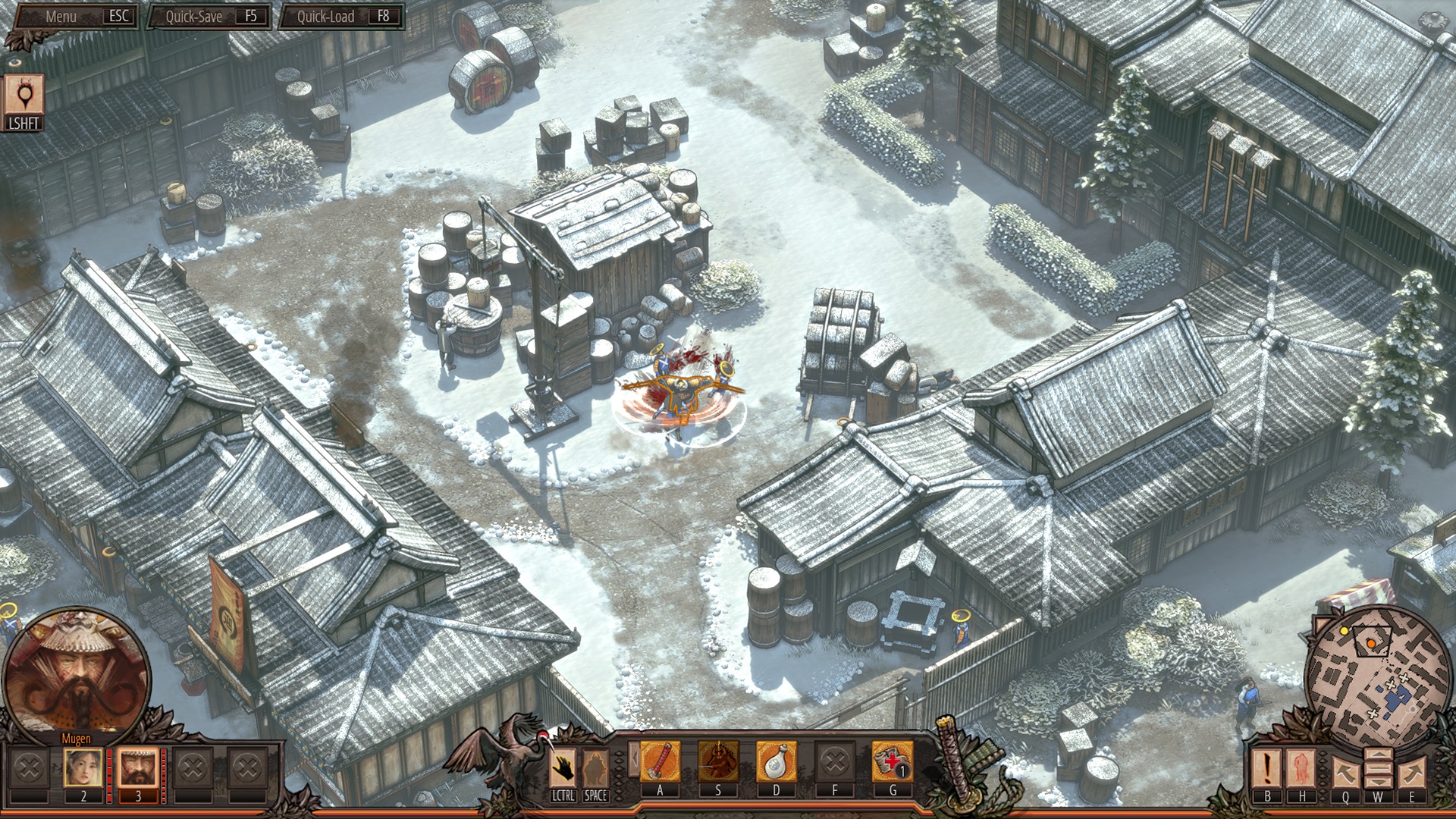 Now, let’s talk about each of the characters’ different abilities, and how they’ll aid you into battle. First off is Hayato. He’s a quick shinobi and can deliver a swift strike to kill an enemy with his katana. His specialty is the shuriken, where you can take down an enemy from afar. You have to pick up the shuriken back again, though, or else you won’t be able to use it again. He can only carry one body at a time, and can only walk to hide it on a certain location. He can also use a stone to alter an enemy’s sight, depending on where you threw the stone.

Hayato can use his grappling hook to rappel up and down houses, can also climb ivies, and can also walk on ropes connected from house to house. He can jump down a house, and jump over a gap to get to the other house. Technically anything a ninja can do, Hayato does.

Mugen is a samurai who’s not really fit for stealth (because, well, he’s got an armor), but once you get to know how to use him effectively, he can be a pretty good ninja too. Mugen’s special ability is his Whirlwind Strike, where he can slice up to 3 enemies in front of him to make quick work of disposing a 3-man lookout. He can also carry 2 bodies at the same time, and can even run while doing that. He’s also the only one capable of doing a 1v1 against an enemy samurai, and can throw his ‘sake’ to lure enemy soldiers in. He can’t climb ivies and do hook-shots, though, so be careful as to where you’ll put him. 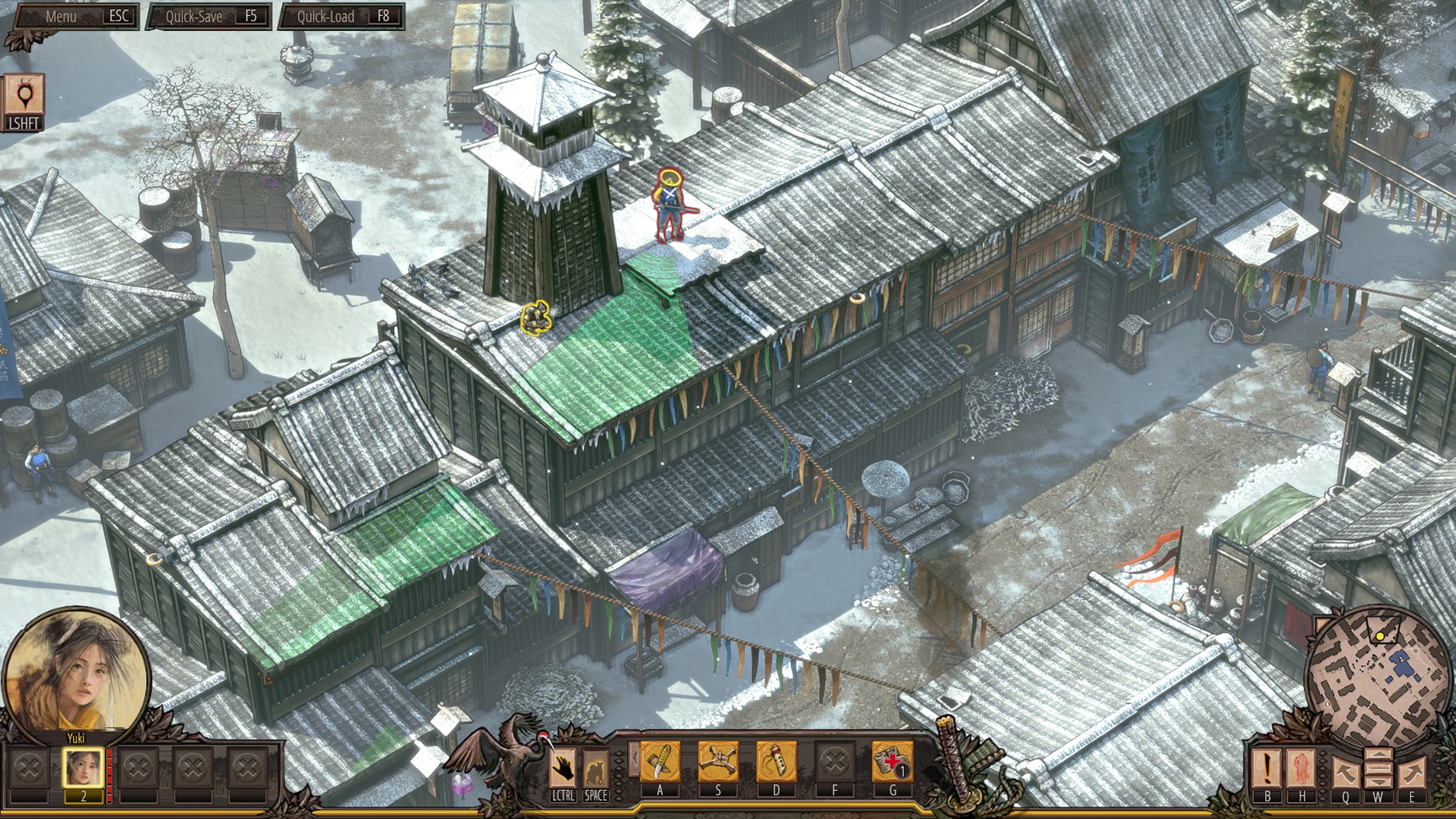 The third one is Yuki. Yuki’s a little kid who’s sort of had a bad past (she got orphaned at a really young age and was taught to steal from others by different people), and is well-versed in the use of her knife. She met Hayato in one of his missions, and decided to call him his ‘sensei’, or master, and followed him wherever he goes. She can utilize her trap ability, which causes enemies to die when they step on it, combined with her whistle ability, where she whistles at an area to lure in enemies — a pretty great combo, but lackluster, nonetheless.

She can also climb ivies and can use her grappling hook to go up or down from houses (basically all the ninja things that Hayato can do, she also does it). She struggles when carrying a body, given her petite physique (since she’s a child), so keep in mind when disposing a body as Yuki to be extra cautious not to be exposed.

Now, the fourth one is Takuma. Takuma is a sniper, and can is pretty useful from afar (duh). His special ability is his rifle which can take out enemies at a really far range. He has a limited number of bullets, though, so plan out on when you’re going to use them. Oh, he can also use grenades, which are pretty damn useful in taking down multiple targets. 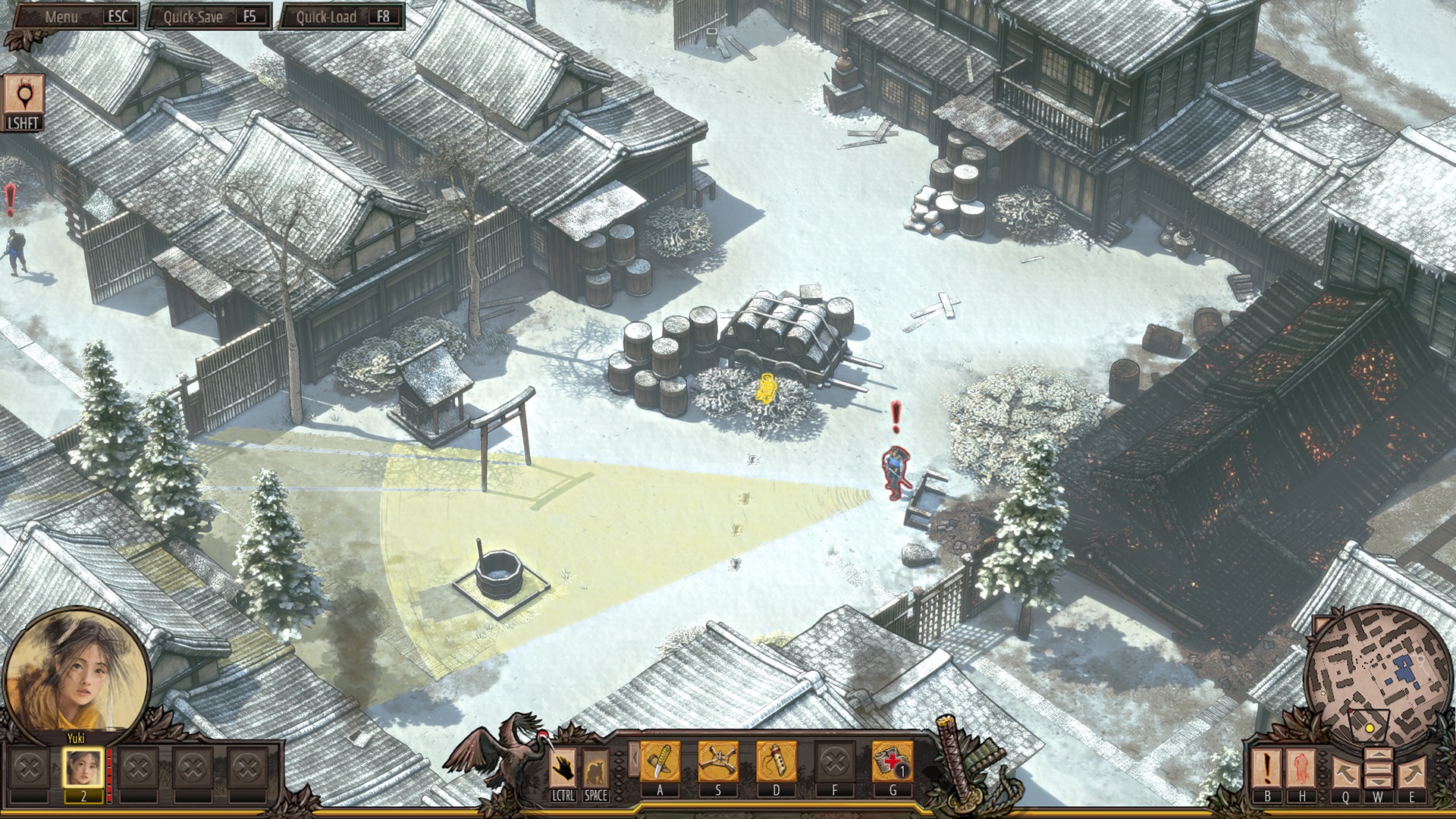 The last one would be Aiko. Aiko is a beautiful kunoichi with deadly means in taking out her enemies. She’s a close friend of Mugen, and was recruited on a mission Mugen had. She uses her hairpin knife, and can use her sneezing powder to minimize the enemy’s viewcone to a minimum range for seconds.

She can use her disguise ability to trick enemies into talking with her, creating a diversion for her allies to easily sneak by areas with a large group of guards. She can also climb ivies, and can also use her grappling hook to climb roofs. Also, it takes 2 or more members to take down a samurai, along with the help of Shadow Mode to ultimately maximize the tactic.

All that being said, a combination of the various members’ skills to be used in the battlefield will make short work of the missions in the game. Do not be fooled by that though, as the game punishes you heavily by making one small mistake. When an enemy spots you, they instantly attack you, and call reinforcements. If you manage to escape their attack, the guards they called will stay in place and will add additional protection in an area, so be really careful not to get spotted. 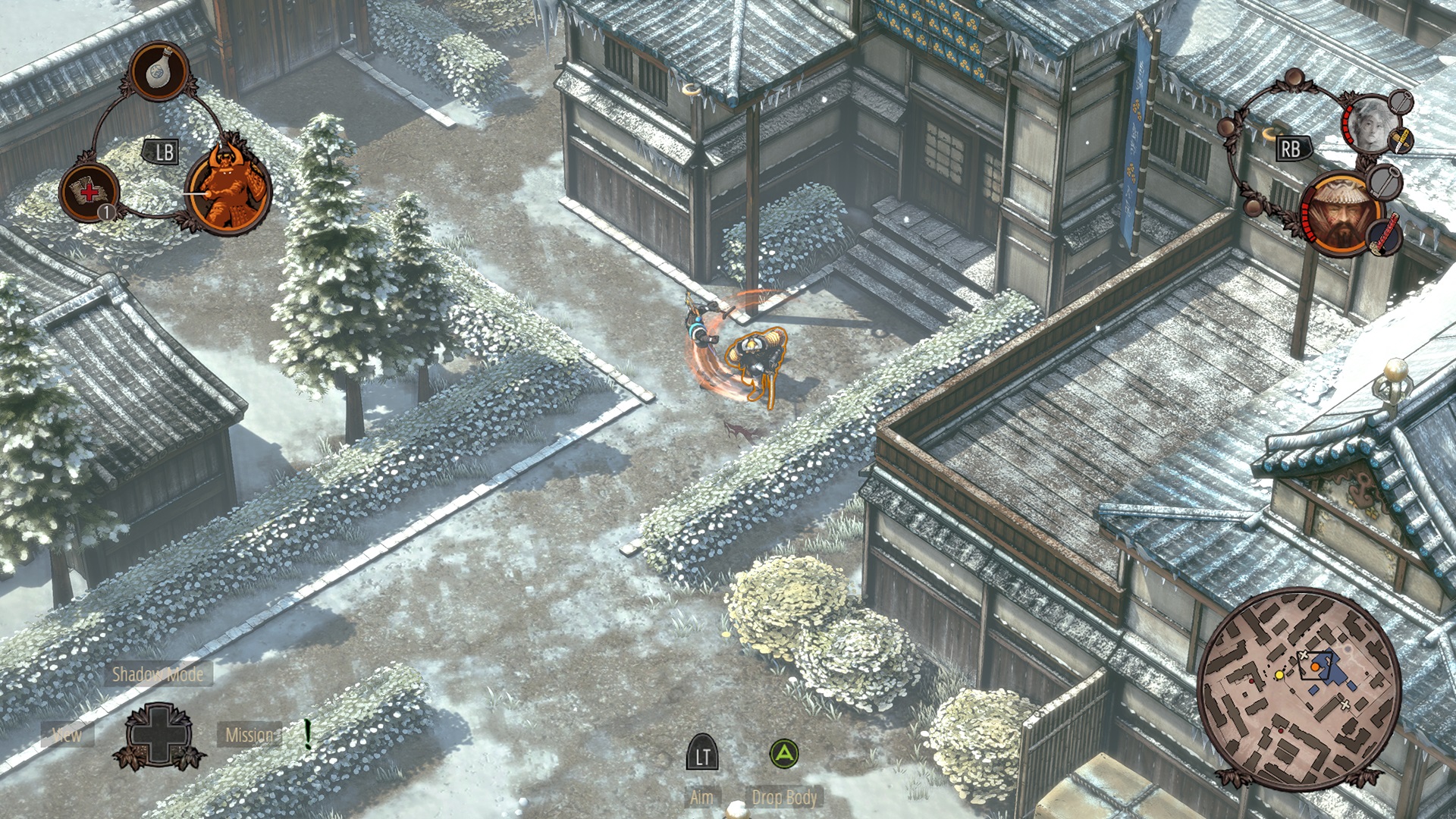 Various enemy-types will be introduced in-game, so make sure to study each one of their behaviours to aid you in your conquest. There are also a variety of ways to take out certain targets, which is a big plus since it gives you options on what you’re going to do.

The game’s environment is just beautiful, too. It portrayed the Edo period of Japan flawlessly, and was able to correctly put in the country’s culture during that time. The voice actors portray their characters really well, and it only gets better when you switch the audio from English to Japanese (trust me on this one, huge anime nerd here).

Everything in Shadow Tactics is just so refreshing (and challenging that’ll ultimately get you frustrated, but will still make you play the game because you really want to know what’ll happen next, too), and it is really a huge surprise to me that such game still exists during this time of generic triple A titles.