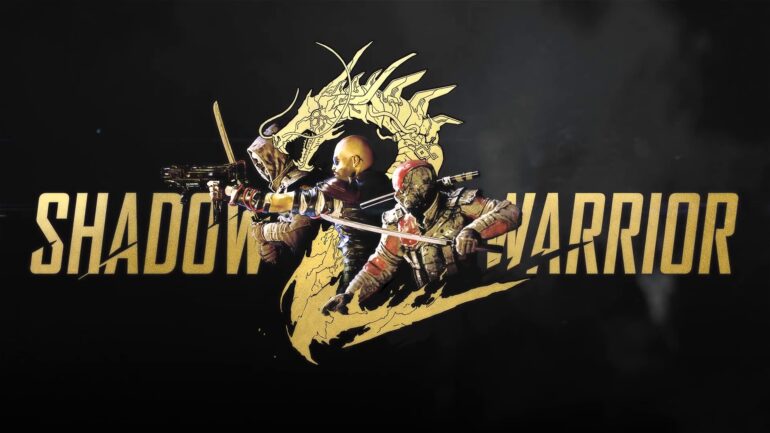 Shadow Warrior 2 is like most cheesy, over the top action flicks from the nineties. Blood, gore, big guns and tons of bad puns. When the world seems to be coming to an end and all hope is put onto a warrior for hire named Lo Wang, you know the chances of success are slim.

Shadow Warrior 2, picks up about 5 years after the ending of the Shadow Warrior and things seem to have gotten worse instead of better. Lo Wang is still living his day to day life cracking jokes to everyone while working for the Yakuza. After delivering an amulet to his boss, he gets sent to retrieve the daughter of the head Yakuza and that’s when things go from bad to worse. It seems that the daughter has been injected with a serum that is making her body go crazy and in order to save her; her soul needs to be taken out of her and put into another body while a antidote is made. The thing is, Lo Wang is the only person in the area able to take in her soul, and reluctantly does so. Now, with another person in his head, Lo Wang sets off to get her body back to normal while making sure he doesn’t get killed and earns his pay so he can get back to his normal life. 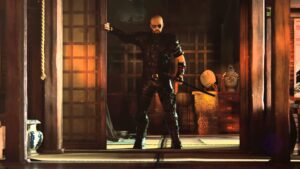 This time around Shadow Warrior 2 isn’t linear like its predecessor. You have a hub area where you can buy weapons, upgrades and take on side quests along with story quests. Side quests offer more weapons or skills to help along the way and can be taken in any order but after completing certain story missions some side quests will no longer be available. With the map, you are able to choose which area you want to visit to either do a quest or free roam around. Each time you visit an area it does get randomly generated and so do its AI, so every visit feels different and might have something new to offer. Instead of paying to upgrade your weapons like Shadow Warrior, in this game you find upgrades and mods by looting them off enemies. You can fuse mods together to make better ones so it’s worth picking up every one you see lying around. 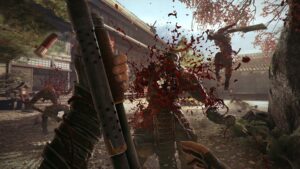 The hack, shoot and slash is back in Shadow Warrior 2, and its better then ever. With more weapons to choose from, along with new skills, it is never repetitive going around killing hordes of enemies. Your skills are now cards that you can upgrade multiple times and customize to have your own type of gameplay. Skill points are gained by leveling up, or finishing quests. Shadow Warrior 2 also introduces multiplayer to the franchise, being able to play the whole story from start to finish with up to 4 players adds another level of chaos to this game. The more players you the harder the AI gets and the better the loot drops. With customizable avatars and unique upgrades, the multiplayer is a great addition. 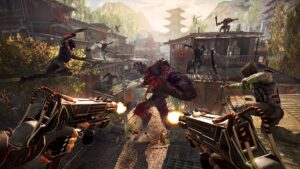 The game’s environments are beautiful, from the future city of Zilla, to the forests and broken temples scattered throughout the game. Sometimes just standing and taking in the sites is a nice break from all the blood and gore this game has to offer. The character models are very well detailed down to the wrinkles and cracks in some of the enemies. The soundtrack is basically a love letter to to the nineties rock; during the final boss the music playing in the background makes you feel like you’re in the middle of an action scene from one of the great nineties action movies. The voice acting in this game is great, the voice cast clearly had a color script to read from down to every dick joke or every death threat. The conversations between Lo Wang and some of the characters are downright funny, and from to time to Lo Wang can be serious himself which adds some dimension to his clown of a character. 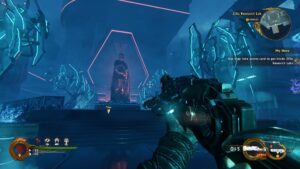 With four different difficulty settings and a new game plus mode, Shadow Warrior 2 does have great replayability. In the new game plus mode you get to keep all your upgrades from the last playthrough and is a great way to get more skill points to max out the skills you couldn’t from the first playthrough. There are tons of secrets hidden throughout the levels, and some are easily missed so getting to go back to collect the ones you missed is another reason to play through the game more than once. With 60 achievements to collect Shadow Warrior 2 will keep you busy for a while.

Shadow Warrior 2 doesn’t usually take itself too seriously with its dick jokes and outrageous story, which is the way this game should be. Don’t take this game seriously and you will have a wonderful time even if the dick jokes might get a little boring from time to time. With tons of replayability and multiplayer goodness for only $39.99, Shadow Warrior 2 is a great game to add to your collection this year. Hopefully Shadow Warrior 3 is being developed because Wang doesn’t seem to be finished yet.

This review is based on a review copy provided by Flying Wild Hog and Devolver Digital.