These are some pretty significant leaks 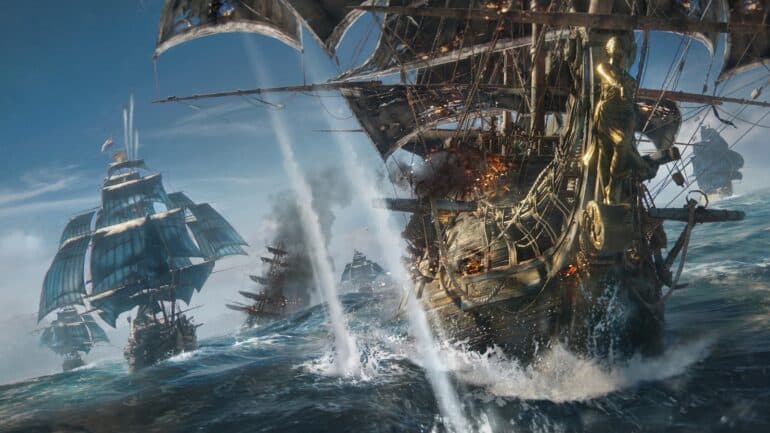 A presentation video detailing aspects of Skull and Bones has leaked online. The 6-minute long video is part of the game’s closed alpha test that’s currently taking place right now. It revealed several key features that we will cover one by one in this article.

The long-awaited Ubisoft pirate game has been dormant for some time and this leak has been our only real update on the game for the longest time. Below you will find a reference to the video of the aforementioned leak.

(Update: the video that had the leaked video was taken down via copyright infringement.)

Link to the original video that was taken down:

The leaked footage of Skull and Bones gives us tons of information about the game and the various things players can expect from it. First and foremost, the game is set in a world inspired by the Indian Ocean during the Golden Age of Piracy.

We also learn that we start the game as an underdog whose goal is to become the most infamous of your pirate brethren. In order to survive as a pirate, you’ll have to craft new ships and equipment within one of the game’s Pirate dens. You’ll also need to gather provisions for your expeditions, pick up high-risk high reward contracts, and gather a crew of like-minded players.

At the start of your journey, you will only have access to a small dhow. But as your Infamy grows, you’ll be able to craft bigger and stronger ships that can be further customized to suit your unique playstyle. As the ship’s Captain, it is your job to make sure that ship health and crew morale are high. If you don’t meet the basic needs of your crew, they will stage a mutiny and throw you off of your own ship.

Everything you do in Skull and Bones is tracked through “Infamy”. And the higher your infamy, the more opportunities you’ll unlock. One of the ways to grow your infamy is to take on contracts. You can share this contract with other players and, as a group of three, take on the dangers. Be careful though, since these are high-risk missions, the penalties are also going to be steep. If that’s not your speed, you can also gain infamy by exploring, plundering, and treasure hunting – everything a pirate needs to prove themselves.

If plundering and treasure-seeking aren’t your thing, you can be more of an enterprising pirate and gather raw materials in your adventures, all of which can be refined for more potential profit at one of your dens. But more than that, you will need these resources to craft better gear and outfit your ship with better armaments.

And you will need every bit of firepower to rule the seas.

Ruling the seas requires players to be strategic with their choices. They have to know when to return to a safe spot and resupply. That’s where Outposts come in. Outposts function as a temporary shelter in case you are too far away from a friendly Pirate den. You can do all things you can do in a regular port, just don’t get too comfortable being there. Keep working your way up the ranks to take on world events like taking a merchant convoy under the protection of warships, or taking on forts and eventually raid settlements.

Losing your ship can be big deal in Skull and Bones. Should it sink, for whatever reason, you will respawn at the nearest discovered den. You will then have the chance to recover most of your lost loot. But you better hurry. The location of your wreck is known to other players. It’s a race against time and the first ones to wreck, take the spoils.

Skull and Bones has come a long way since it was first conceived following the massive success of Assassin’s Creed IV: Black Flag. From everything we’ve seen from this leak, it appears to be an evolution of the mechanics from the Black Flag further refined to accommodate multiplayer activities. Hopefully, we won’t have to wait much further for official news of the game, especially when it is slated for a 2022 release. But based on what we know about the game so far, I’d say things are finally looking up despite the game’s troubled long years in development.

Are you still excited? We know we are.