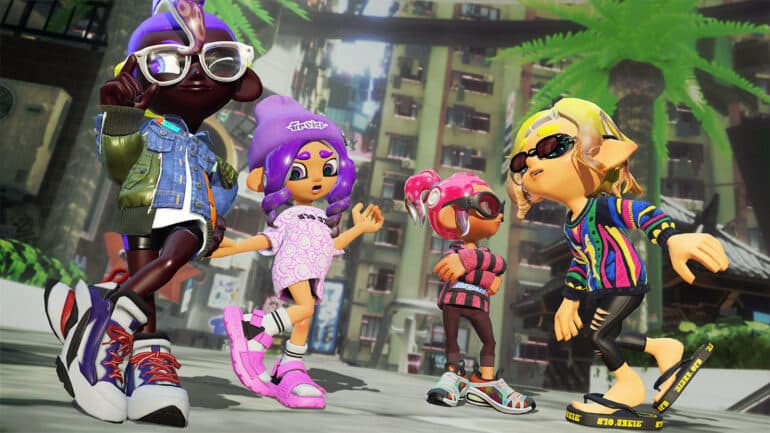 In Splatoon 3, character customization is just as important as choosing the right weapon loadouts. Not only do these wearables make the squiddos look hip and fashionable, gear can also provide stat buffs and abilities that will help players in various ways.

In this guide, we will be talking about the different character customization options, as well as briefly discuss the gear abilities and how to manage them.

Instead of choosing for a gender on the next option, you can either select the eyebrow shape between a thin pair or a thick pair.

The next option is to select a skin tone. There are 9 shades of skin to choose from.

The next option is to select which eye color to have. Only the iris and the pupils’ colors can be changed. There are 21 eye colors to choose from, 6 of which are tri-colors that change the color of the pupil, iris, and the iris border.

The next selection is for the eyebrows. You can choose between the default one (the one you previously selected), one with a cut, a more rounded one, and a more angled one.

The final customization option is the legwear. You can choose from 9 different options, from pants, leggings, and skirts.

As for the top, it can be customized once you arrive at Splatsville.

You can also customize your Smallfry buddy’s look. There are 7 hairstyles to choose from.

Additional gear can be purchased from stores in Splatsville. Each store specializes in a certain type of gear. All of these shops accept Cash for payment.

Naut Couture is the shop that specializes in selling headgear. It is run by Gnarly Eddy and Nails. You can buy different headgear ranging from masks, hats, and glasses.

Man-o’-Wardrobe is a clothing boutique that sells tops ranging from shirts to jackets. It is run by Jel La Fleur.

Crush Station is a shop that sells footwear ranging from sandals, slippers, and shoes. It is run by Mr. Coco.

Most of the gear have an intrinsic ability that is already unlocked. Depending on the rarity of the gear, it can have around 2 to 4 abilities. However, the additional abilities will be locked at first, and only when their unlock requirement is met will they become an active ability for the gear.

Here’s a list of all the confirmed abilities in Splatoon 3 so far:

Murch is back in Splatoon 3 and this time, he can help out with managing the abilities that are on your gear. He provides different ability services that can help you get the most out of your gear.

Hotlantis is a general shop where you can purchase more items that can be used in other customizable parts of your character and profile, such as your Splash Tag, your Locker, and your Victory Emote.

Splash Tags are the banners that shows your player tag and it usually appears on screen prior to matches. It can be customized based on how you like it. You can choose the design of your banner, the earned badges that you want to display, and the title that you want to be known as.

The Locker Room is a place where you can manage and see your locker amongst other lockers of the players that you have been on a match with. Inside your locker, you can arrange the items and gear that you have for other players to see. You can also place stickers on the locker’s door.

You can also change your character’s emote that it does when you win a match. This can be bought from the catalog found in Hotlantis.

Check out this video by M.40wth showing the character customization in Splatoon 3: