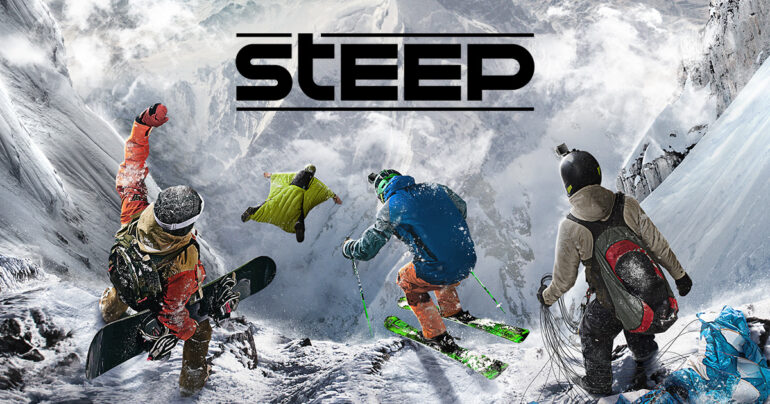 There was a time during the 5th and 6th generation of consoles when arcade sports games were a dime a dozen. Among those titles, SSX Tricky was the snowboarding game that people look back upon fondly. It combined the fun of arcade snowboarding with a splash of style and quirkiness. Now, however, there aren’t any titles that evoke the same spirit as those generations’ games, but maybe Ubisoft could bring it back with a modern twist.

Steep is Ubisoft’s answer to those people thirsting for a modern arcade sports game. But is Steep what we’ve been waiting for, or another game failing to bring back the joys of the past. 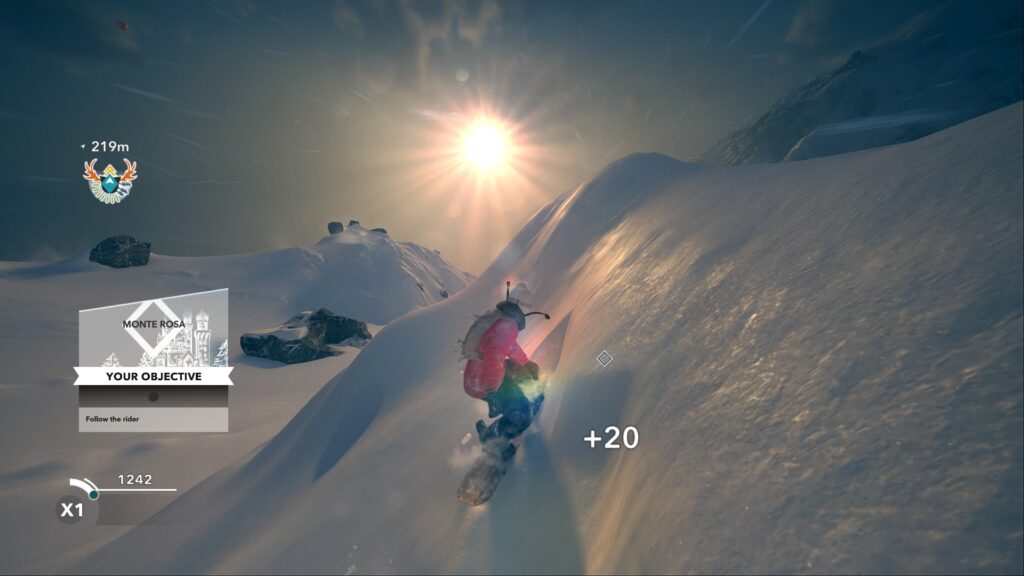 Ubisoft’s Steep is a sports action game featuring snowboarding, skiing, paragliding, and wingsuit flying, but combined with what Ubisoft does best — an open world. The game is set entirely within the Alps Region, and it’s free for you to explore. You can explore the region by completing various challenges scattered throughout the game, with each challenge unlocking a new one or a new map point. Each challenge has an indicated difficulty between Easy, Medium, and Hard, while also providing medals to be earned depending on your score. The types of challenges you will be facing are split up into different sports and categories, with each adding to your play style attributes.

Most challenges are filled with thrill-seeking moments, where you perform insane stunts by jumping off cliffs, racing down various mountains, and even trying to inflict the most amount of damage to your rider. Not all challenges are as fun as others, however. The challenges that provide the most thrill are the ones involving skiing, snowboarding, and wingsuiting. Paragliding, on the other hand, mostly comes off as dull and incredibly awkward at times. This is especially true when jumping between different challenges, where your blood is pumping due to the insane cliff jump you had just performed in a previous challenge only to be brought down by a boring and awkwardly controlling paragliding challenge. 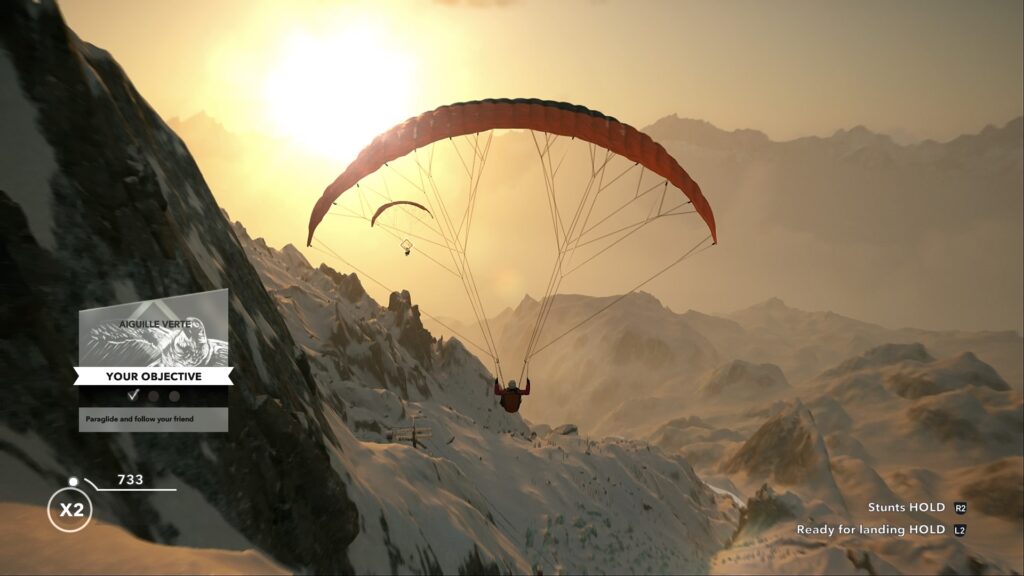 For the most part, Steep controls well. I could perform various tricks and wingsuit across mountain tops with incredible ease due to the simple control scheme. However, again, with the paragliding challenges, it always came across as awkward and never giving enough control where I felt comfortable. A downside to this simplicity is you won’t be seeing yourself memorizing various tricks or combos. This is a shame since, during the challenges that focus on performing various stunts, it would’ve been nice to have a list of combos to choose. It would have evoked that sense of accuracy and skill, where the use of the right stick just doesn’t convey at all.

Steep also provides a way of seamless multiplayer where random players pop in the game. In each challenge you’ll notice a random player alongside you, with the option to group up with that player. This seems like a cool idea and great way to meet players for a group play session. However, in practice, it doesn’t execute so well. There were countless moments where I would try to group up with someone, only to be met with no response. This isn’t the player’s fault of course, but due to the game’s nature where you are racing at high speeds or performing blood rushing stunts down a mountain, there isn’t enough of a window to accept the invitation. Not only that but the the notification that pops up when someone invites you is so small that most of the time you wouldn’t even notice it. Also, it seems there is no incentive either as there doesn’t seem to be any experience points increase when grouped up with someone.

Aside from the random encounters with other players, there is another way to interact with them and that’s by creating player challenges. Every time you finish a race or a free style mission, you can set a challenge for other players to do as a way of providing competition and an extra objective between friends. This is a lot easier done in practice and can actually be performed with ease without interrupting gameplay. 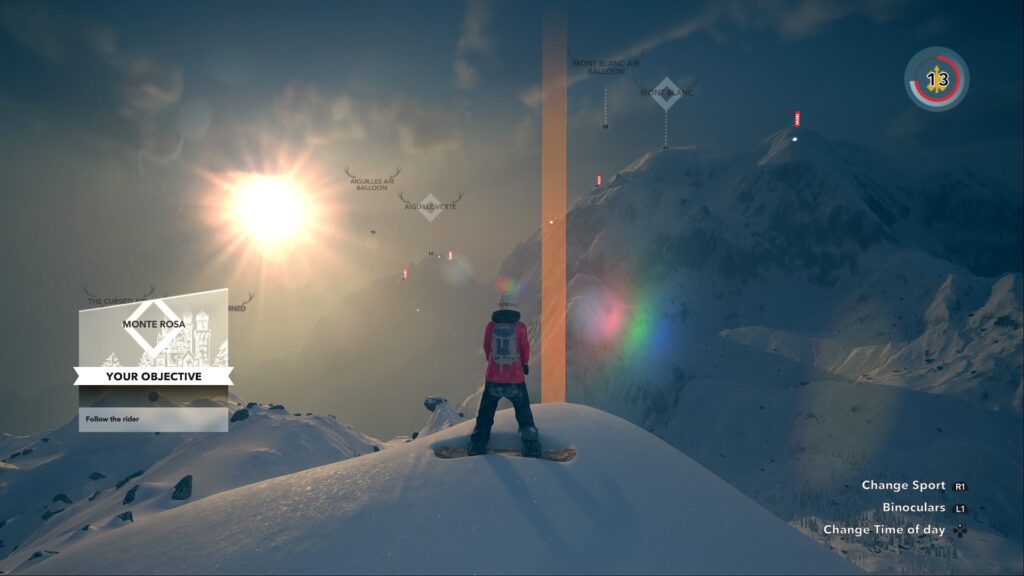 Visually, Steep nails the looks of the Alpine region and stays faithful to its geography, albeit condensed, but still manages to make each location distinguishable from the next. There will be times where you just want to stand still at the mountain top and take in the white world below. Adding to this atmosphere as well is the soundtrack. While jumping off cliffs or racing through a group of trees, you will be accompanied by either an up beat Indie-Rock track or even Flight of the Valkyries. You can even choose what type of genre to be played, whether you want it exclusively to be Hip Hop or Chill Pop. Either way, there’s no going wrong with the soundtrack and you may even find yourself looking for the playlist on Spotify.

Overall, Steep is fun and definitely a world you can get lost in. The map is huge and full of challenges and locations to discover, with each providing thrills and stunts that will keep you coming back for more. Although it could have done better in some aspects, it still provides a fun package that mixes the fun of past arcade sports games, while adding modern elements to not make it feel outdated.

This review is based on a review copy provided by Ubisoft.