The 90's throwback we've been looking for 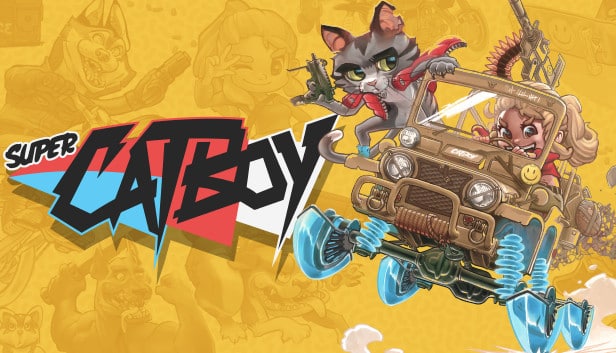 Super Catboy is an action-packed platformer combining the best elements 16 bit platformers with the added benefits of new mechanics. The demo we played at Steam Next Fest showed off some of the things to expect from three different environments, particularly the unique elements in each map. In terms of game feel, the game does a good job replicating that of 90’s side scrolling games without relying too much on nostalgia.

The demo starts with Catboy suspended in a tank which is being transported in a cargo plane. Suddenly, the plane is attacked and we find ourselves walking away from the wreckage. There are dog soldiers waiting close by. I don’t know what they want with us, but I know my Catboy won’t be surrendering quietly.

Super Catboy, the titular hero of the game, may have a funny looking walk cycle but do not let that adorable ball of fur fool you, he is a certified bad-ass. Catboy is capable of laying down the smackdown using his claws and dive kicks. He also runs around packing heat. From this demo, we only got to use a pistol throughout the whole thing. I wondered if we will get more guns, and thus turning the game into a Metal Slug clone. But the more I thought about it, the more unnecessary it felt.

For starters, I think it would take away too much from the melee combat. And I do like spamming dive kicks. The enemies also don’t go down with one bullet. So, it wouldn’t work. Though I wouldn’t be surprised if at some point in the game Catboy manages to pick up a heavy machinegun.

He can also use his claws to slowly descend walls. This ability came in handy when scouting gaps. I even found a few hidden trinkets in a few cheeky places.

The golden cat statue looking thing doesn’t do anything besides counting for level completion. The end of the level also tracks things like enemies killed and coins collected. I don’t know what that means in the overall game yet, but it’s nice seeing that 102% level completion. Something I never knew I missed in older games.

After a couple of levels, Super Catboy hitches a ride with Weapongirl. The duo take a bike across the forest. This section of the demo is pretty cool if just for the fact that I shoot forwards and backwards. I am so glad that I can shoot in more than just one direction. The enemies weren’t too annoying to deal with. I finished the segment with relative ease even when I took a considerable amount of damage taking screenshots.

The next two levels further showcased interesting level elements. The train is constantly moving, so naturally things like wooden posts will be zooming by. A typical hazard on train levels. The snow map is pretty much self explanatory, ice and slippery surfaces. The most note worthy thing about the level are the gun emplacements. Super Catboy is fun up until that point solely because there is hardly any post hit invulnerability. When I first came across them, I was surprised at how much damage I took in one burst.

For some odd reason, I don’t want the developers to change it. It’s a curious choice that’s usually present in poorly designed precision platformers. But I kind of dig it in this game. Since the game is more combat oriented, there is a certain level of risk-reward when it comes to taking damage. But that’s just me.

At the end of the snow level, there is an encounter with a bull boss. He was easy enough to dispatch. Just wait for him to charge, get stuck in the wall, wail at him for a bit, and dodge as he regains his footing. Rinse and repeat until defeated.

I know it’s too early to say, but I definitely hope the bosses will have more moves in the full game.

The pixel art is crisp and the animations are everything you’d expect from a 16 bit platformer. Not much else to say except, I hope they a lot more levels. The music did its part in selling the whole 90’s aesthetic.

Wrapping this up, Super Catboy is a very promising action platformer. The demo was fun to play but a part of me wishes the developers didn’t hold back on everything the game has to offer, at least in terms of gameplay. Especially since the game is coming out in a few months. We’ll just have to wait and see.

Super Catboy releases sometime in the summer of this year on PC (via Steam).