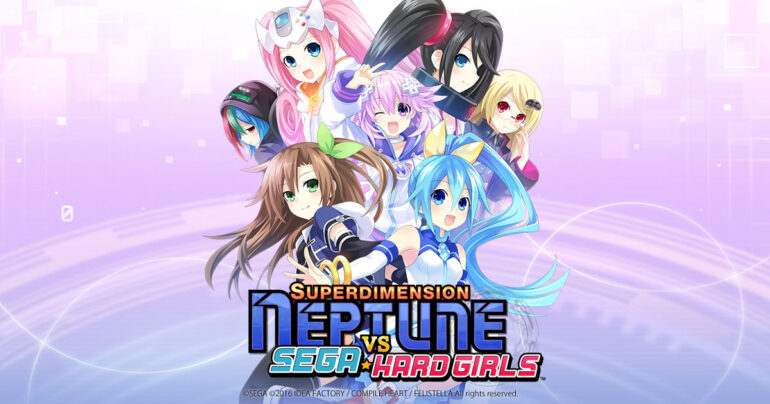 The Superdimension Neptunia series has been around since August 2010 and has spawned an array of games along with an anime series. The series itself has 4 mainline games along with 6 off-shooting games that have all made it to the west and have been received well. The series itself borrows from real life console wars by making the consoles the main characters of the series, while other characters are based on companies that exist in real life.

Superdimension Neptune Vs Sega Hard Girls is the newest game in the franchise and revolves around a character named “IF”, who is an adventurer looking for a library that is said to hold records of the history from all time. On her way to the library a girl falls out of the sky. Barely catching the girl, IF carries her along until she makes it to the library. Once they arrived in the library, some history starts to go missing or corrupt. The librarian asks IF to travel back in time to certain areas to see what is happening in the past. The girl that IF saved wakes up with amnesia, only knowing one thing: that she was called Segami. She insists to tag along IF to help her, but has a hidden agenda of her own. 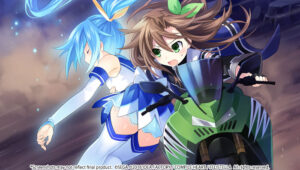 The gameplay is similar to the main line games: you travel around a map and choose which location you wish to visit and then get to run around the dungeon. When in dungeons you can pick up medals scattered throughout the dungeon and also find a baseball hidden in each dungeon. After obtaining a certain amount of baseball, a character will exchange them for items.

When in combat you have a meter that fills up after doing certain actions. Moving around, using skills, attacking or using items all fill the meter. Where you land on the meter at the end of the turn can either make you block, or make you wait longer if it lands on the red part. Super moves can be used in battle by filling up the meter and can turn the tide of battle, but if done at the wrong time, you will leave yourself open to enemy attacks for a longer period. 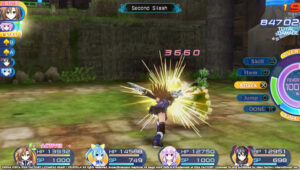 During combat, several shapes will appear over the head of your characters that will grant a variety of buffs during a battle. Whenever taking damage or doing damage, a bar will fill up next to the meter and once it reaches 100% you will enter “Fever Time”. During this time your enemies will not have a turn and you can attack over and over until the bar runs out. 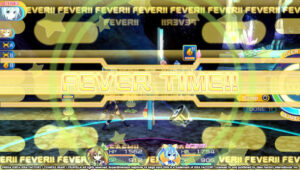 One of the added elements of this game is the introduction of character classes. Each character has a select number of classes that can be obtained throughout the story. The classes change the character’s stats and skills that they have, and the added benefit to upgrading different classes is that you get to keep the skills you have unlocked for them and can use them with other classes.

Though the game is on the PS Vita, the character models look well-made, with unique animations for each character whether or not battle or idly standing by. The dungeons themselves don’t stand out too much compared to the rest of the series, though new dungeons have been added and several of them are different variations from past dungeons.

The voice acting in the game is one of the highlights of the game. The story is filled with jokes around every corner, and 4th wall breaking are brought to life through the cast. The voice actors are the same as the rest of the series and deliver a great performance, as they’ve always done, with the added option of changing the audio to Japanese. 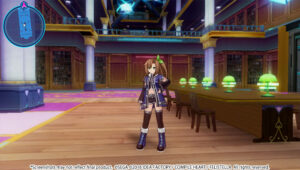 The voice acting in the game is one of the highlights of the game. The story is filled with jokes around every corner or 4th wall breaking and are brought to life through the cast. The voice actors are the same as the rest of the series and deliver a great performance such as they have always done. With the option to change to the Japanese voice acting so everyone can choose what they want.

The game has several different endings depending on how you wish to fight the final boss of the game. How much time you spend on the game can also impact this. With tons of side quests and achievements in the game, people will be looking to put in more time, since there is tons of stuff to keep them busy. There are also some DLC’s for the game that adds scenarios along with several other classes for IF and Segami for $1 USD.

Superdimension Neptune Vs Sega Hard Girls is a great addition to the series along with other great games. With new characters and gameplay mechanics added to the franchise, there isn’t really anything holding this game back. Though the next mainline game in the series is far-off, there is already another game on its way to the west — hopefully the Sega Hard Girls will appear again.

This review is based on a review copy provided by Idea Factory International and Compile Heart.