Tales from the Borderlands – Review 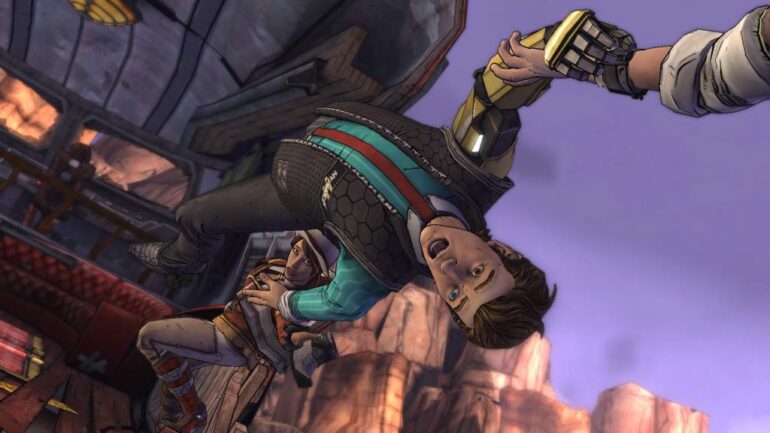 Tales from the Borderlands is an episodic adventure game developed by Telltale games and Gearbox software. Telltale brings in immersive story telling into a franchise that’s well known for just mindlessly blasting enemies and  looting. Borderlands does have interesting and funny dialogue but Telltale brings it to a whole different level.

Tales of the Borderlands is just like the other Telltale titles but now set in a apocalyptic and psycho-infested planet. The world and lore of Borderlands is as rich as the Eridium deposits within it, a lot of stories are to be made or heard in Pandora. Telltale’s Tales from the Borderlands centers around Rhys, a Hyperion Senior Assistant Vice Janitor, and Fiona, A crafty but reliable con-artist, whos stories intertwine whilst seeking fame and fortune. You’ll be alternating the two throughout the story and each has their own character, inventory space and special ability but it will be all up to the player to decide their fate.

Rhys has the echo eye, an advanced eye transplant that lets you scan the environment for more information and other purposes that will accord with the story (which I will not spoil. Trust me its hilarious). Fiona on the other hand has a bank account, You will collect more money as the story goes on and with more money on your bank account you get access to more dialogue options. Fiona’s ability isn’t that much of a help since you’ll rarely come across any money and the choices aren’t really that dynamic to the story.

Like what Telltale is known for, Tales from the borderlands is a point-and-click adventure game. There are a lot of things that can be interacted in the background and they add a bit of atmosphere or lore to the story. With the use of your keyboard you can move your character and do Quick-Time-Events, and the mouse for interacting and dialogue choosing. The gameplay is very bare bones as you’ll only be required to do this for the majority of the game aside from a few QTEs here and there, but what can you expect from a Telltales game? There may be a bit of variety then and again but it’ll all boil down to pointing and clicking. Gameplay-wise it is pretty standard for a point-and-click game.

Which then brings us to the meat of the game: The writing. The writing in this game is amazing. Keeping with the tone of the main titles, Telltale has captured the insanity and size in the world of Pandora in just a couple of episodes. The writing and direction of the game is what makes most Telltale games great but Tales from the Borderlands takes it by the bag. You encounter characters through out the story that are equally interesting and bizarre, each memorable in their own way. The plot gets crazier and more intense in every concurring episode that its really surprising on how well the story is paced.

Tales from the Borderlands‘  first episode Zer0 sum is a very strong start for this episodic adventure. Id rather not spoil the story as it is a treat to behold and should be experienced first hand. It shows off the main characters and an introduction to the games mechanics, such as the protagonists abilities. The game begins with Rhys and Fiona tied up and help captive by an unknown bandit. The game’s events is then told through flashbacks and after a set amount of time will then cut back to their current dilemma of being tied up. This sorts of acts as your transition between the two as they tell their side of the story. Rhys starts his story with him being fired from his job at Hyperion and this brings him to get revenge on his boss, this brings him to Pandora and then Fiona’s story begins. Fiona is assigned by his father to strike a deal with a man on selling a Vault key, a rare artifact in Pandora. Hilarity ensues as the two are now banded together and more crazy things occur. From Death races to betrayal, Pandora is full of surprises.

The second episode Atlas Mugged is a bit too fast. With a lot of plot going on and things just happen with no explanation or backstory. The story begins on the cliffhanger where the last episode left off. The two are then separated and leaves them to think about each other. Fiona is then hunted down by bounty hunters and befriends a familiar face. Rhys is tracked down by his boss but is saved by the a ghost that resides in his head, a ghost of a certain Hyperion big shot that will be a shock to those who played the main titles. The two then meet again but is now on the run from their pursuers as they seek for treasure.

Tales of the Borderlands graphics aren’t that spectacular. Telltale uses the same engine on which they use to make their other titles. Cel-shading does make sense since the main Borderlands titles were also done in the similar style. There are a few visual jokes on the main series such as reusing the main games’ inventory UI and the visuals used for loot. Overall it looks great and gives you that feel of playing the main titles. The sound design of the game is amazing. From how well the voice acting is presented and from the multiple genres and nostalgic soundtrack, it really gets the Borderlands sound. Tales of the Borderlands aesthetic overall is really good, It really does look and sound like one of the main Borderlands games. It parodies the main games it was based on and even itself, using visual cues and well-delivered dialogue.

Overall Tales of the Borderlands (in its current state) is a very good game. With its great writing and well placed punchlines, Telltale really does a great job at making a Borderlands adventure game. Even rivaling the writing of the main series. Tales of Borderlands is a great Borderlands spin-off and a great standalone adventure game, It does not disappoint. I am looking forward to its future additions.

This review was based on a review copy given by Telltale Games. This review and score will update when new episodes will be released.