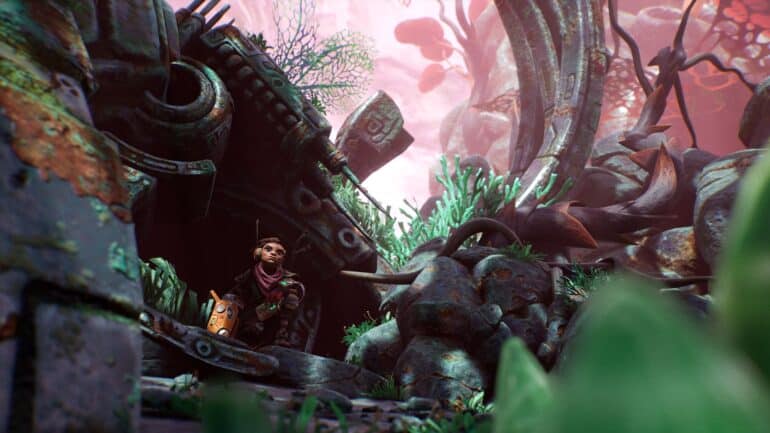 Publisher Thunderful has announced today the successful launch of its space-exploring adventure, The Gunk, on PC (via Steam) today starting from 5:00 pm CET. The Steam release of The Gunk features support for some of the most requested languages from the community, including Brazilian, Portuguese, Japanese, Russian, and Simplified Chinese.

To celebrate the launch of the game, a new accolades trailer highlights the compelling features that have engaged hundreds of thousands of players.

On top of the news of the full release, players can take advantage of the recently added photo mode. Post-processing photo editing options include the ability to adjust depth of field, exposure, field of view, add filters like “noir”, “sepia”, and “cartoon”, and more. The mode allows you to adjust the pose of protagonist Rani and even change her facial expressions to add personality to your snaps and perfectly match the tone you are aiming for with each shot you take.

In The Gunk, you take on the role of Rani, one half of a space-hauling duo that stumbles across a seemingly barren planet infested with a strange undiscovered substance they call “the gunk”. Rani and her partner Becks wonder if their days of scrapping for resources to make ends meet might be at an end with this usually discovery.

But there are other pertinent questions to answer: what exactly is the gunk? How did it get here? What kind of civilization that’s left only ruins behind?

The game has a big emphasis on exploration with a wondrous and diverse alien world to discover biomes ranging from rocky canyons to dense jungles, to deep subterranean caves and a few more surprises. The gunk is turning all of these zones barren, but as you remove it using Rani’s upgradeable goo-sucking power-glove, you’ll discover a flourishing ecosystem seemingly suppressed by this mysterious and destructive gunk.

The Gunk is out now on Xbox One, Xbox Series X|S, and PC (via Steam).