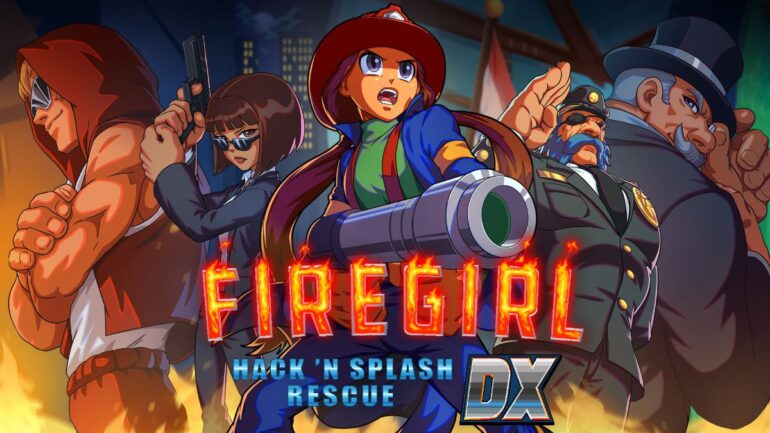 Publisher Thunderful and developer Dejima have announced today that the new deluxe version of their roguelite indie firefighter Firegirl Hack n Splash Rescue, it will be called Firegirl Hack n Splash Rescue DX. The game is making its way onto PlayStation 4, PlayStation 5, Xbox One, Xbox Series X|S, and Nintendo Switch on June 22nd, 2022, with the PC version (via Steam, Epic Games Store, and GOG) of the game to be updated to the DX version on the same day of release.

The original release of Firegirl on PC gave us invaluable feedback on how we could improve the experience significantly ahead of a console release. With the completely reworked and rebalanced version of the game that is Firegirl: Hack ‘n Splash Rescue DX, we’ve kept everything that was great about the original version and reworked the wrinkles to provide a definitive version of the game. Look forward to it on June 22nd.

Thanks to these tweaks, a play style focused on extinguishing enemies is now more viable, with players now receiving more additional time for extinguishing fiery foes. Players will find that exits are now easier to discover, water refills will be more readily available when they are running low and the income system has been rebuilt from the ground up.

Firegirl Hack n Splash Rescue DX is a roguelite platformer where you take on the role of a young fire rescue officer breathing new life into her rundown local fire station. Armed with your trusty axe and high-pressure fire hose that also doubles as a jetpack, respond to emergency calls that bring you to dangerous procedurally generated blazes across the city.

Between high-octane missions where you will be boosting your jumps with your hose, extinguishing dastardly pyro-monsters, and rescuing trapped civilians (and cats!), you can hang out at the Firehouse. Here, you can upgrade your equipment and hire new staff to make you more effective in tackling the challenging blazes to come.

You’ll need all the help you can get to survive in this fun, thrilling and tricky roguelite!

For more on Firegirl Hack n Splash Rescue, check out: