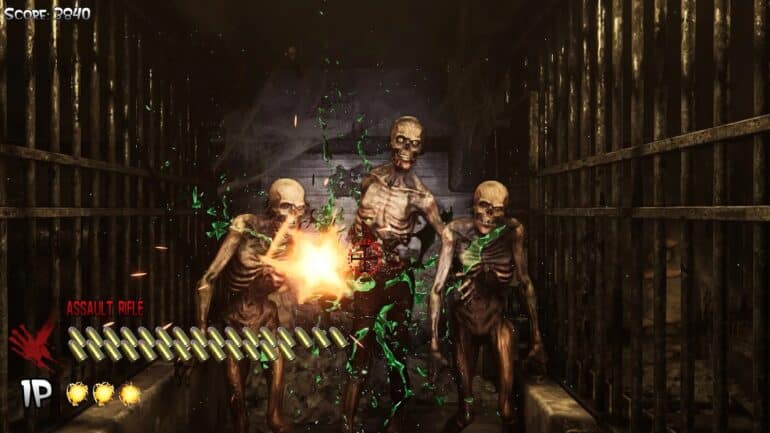 The House of the Dead Remake is coming to the Nintendo Switch early next month and it offers big improvements from the original, but it will also give players the same gameplay experience as the arcade: the ability to aim with JoyCons like a gun.

The fun factor of the original The House of the Dead in the arcades was using a light gun where players could aim and shoot at zombies then reload when they ran out of bullets. In the remake, the developers wanted their players to have the same experience, which is why the Nintendo Switch was the perfect choice for the game’s platform.

According to Producer Artur Grzegorczyn in an interview with media outlet Way Too Many Games, the team focused on making use of the JoyCon’s gyro aiming capabilities.

“We focused on utilizing gyro aiming in the best way we could,” Grzegorczyn explained. “For example, multiplayer single joy-con mode with both players using gyroscopic functionalities. It is mostly about how it is implemented, and how many options you have to set up gyro to your liking. From sensitivity to mixed gyro-analogue controls – there is everything you need to make you feel comfortable with it, so you can just focus on gameplay.”

The producer did say that players can use the analogue aiming mode if they are playing on-the-go.

“Of course, when you’re “on-the-go”, you can use an analogue aiming mod, which is not that bad, to be honest.”

Aside from the JoyCon utilization, Co-Producer Benjamin Anseaume shared an interesting tidbit for those who are feeling nostalgic when playing the remake. Remember those characters with the cheesy lines in the game’s cutscenes? It seems it is still in this game but with a new team of actors.

“… we are working with an awesome team of actors, led by Natalie Roers, an extremely talented professional,” revealed Anseaume. “We had several discussions about it and they really caught the B-movie feel of the voice acting. I think you’ll like it!”

Lastly, it seems the team is hinting that the game could come to other platforms, especially on virtual reality. It would be the perfect gaming experience for this remake.

“I can’t announce anything yet, but depending on the reception of the game, we could have more announcements in the future… stay tuned!” teased the co-producer.

The House of the Dead Remake launches on Nintendo Switch this coming April 7, 2022.