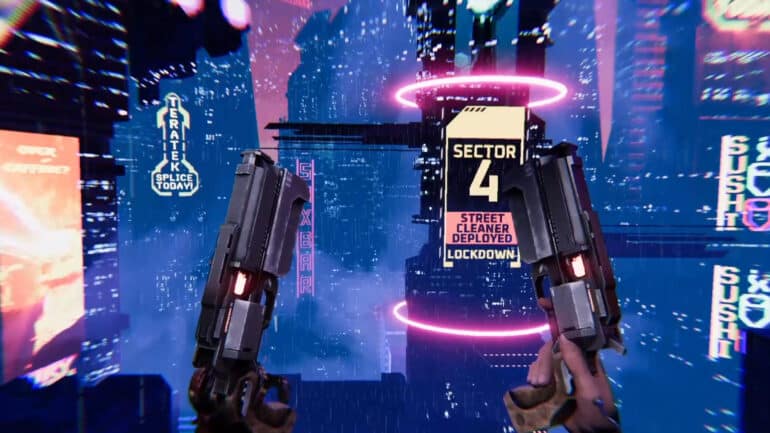 Turbo Overkill seems like a loving homage to the retro-FPS games of the past, however it’s actually a game that carries a notable history. Its two-man indie game development team, Happy Trigger Interactive, were part of the people who helped start famous game developers such as id Software and Remedy Entertainment, creators of DOOM and Max Payne respectively. Turbo Overkill is a game that has vision with experienced hands to craft it.

There is quite the amount of excess in Turbo Overkill. The people who made it certainly didn’t hold back their ideas resulting in a game that feels like it was Blade Runner turned DOOM with sprinkles of Robocop in the mix. You have relentless enemies that can kill you if you’re slow, bottomless pits that you can fall into, and a hazardous cyberpunk environment filled with bright neon lights and a lack of regard for human life. Thankfully you have an arsenal of extremely deadly but over-the-top weapons including a chainsaw leg that more than makes you an adversary for any freak in your way.

With only two people making Turbo Overkill, can it really offer players a great FPS game they deserve? Let’s find out.

Turbo Overkill is a game in Early Access by the time of this writing. It’s understandable that there are a few bugs and glitches in the way that need to be ironed out. While they’re not detracting to the game at all, they can be incredibly annoying and even frustrating at worst. I experienced falling through the map without dying and had once needed to restart a level because an area remained locked with no way to enter even after defeating all the enemies. And I did experience the game crashing once. But all that did little to deter me from playing Turbo Overkill.

I can describe the gameplay of Turbo Overkill as a first-person bullet hell movement shooter. The protagonist is incredibly fragile. A few good shots is enough to put him down which encourages constantly moving around to dodge incoming fire. It does an incredibly good job of making me feel like an utter badass moving around while blasting foes. I could even slide towards them with my chainsaw leg to rip them apart while garnering health and shields thanks to my upgrades.

Turbo Overkill has a diverse selection of weapons. A massive part of the appeal of the game is being able to choose between a variety of different toys to kill your enemies. You have your dual pistols that can auto lock into enemy faces. You have your double-barrel shotgun that can spit out sticky grenade launchers. You have your minigun that can transform into a flamethrower. Almost every weapon, save for the rocket launcher, has an alternate fire mode that can expand their use. The arsenal isn’t complete yet in the Early Access and other weapons will be added soon.

Enemies in Turbo Overkill are quite varied yet punishing. They turn the level into a bullet hell where you frequently have to dodge in order to stay alive. Some of them can really be challenging to fight against especially in smaller areas where you don’t have much room to move. Although the Steam page for Turbo Overkill did mention multiple bosses, there was only one real boss at the end of the Early Access.

Despite the carnage and debauchery of Turbo Overkill, it isn’t brainless and requires a certain degree of strategy in gunplay. You will die a lot even normal difficulties and it’s best to try out different approaches if you’re having a hard time.

As this is an Early Access game, Turbo Overkill at the moment can be completed in a little under 8 hours. Each level is about an hour long and level designs are pretty clever. There’s quite a bit of platforming in the game that required some precise movement. At times the level design can be quite confusing as it was difficult to figure out where exactly the game wanted me to go. There are moments where there’s a clear marker of which direction I should be heading, but for most part I was encouraged to look around nooks and crannies to understand where exactly I needed to jump to.

The level environment can be just as deadly as the enemies themselves. There’s this one train level near the end of the Early Access where you can get killed immediately by platforming on the sides of the train due to incoming structures. Another level takes place in the rooftops where dodging at the wrong time can lead to falling down to your death. There’s a particular level with saws that you have to platform around where if the game detects your hitbox hitting one of the saws, it’s instant death.

The neon lit background of Paradise where the game takes place does give a heavy feel of cyberpunk. It’s reminiscent of the 80’s vision of what the future would look like. Although the story didn’t really hook me in, I was interested in the environment and the world of Turbo Overkill.

Turbo Overkill isn’t very demanding and I could run it on max graphics settings with my RX 5500 XT (4GB) while even recording my gameplay. It’s clear that Trigger Happy Interactive focused more on fun than graphics and it pays off wonderfully.

Even as Early Access, I can tell that Turbo Overkill is going to be a good game. I’d love to see the full vision of Turbo Kill as imagined by Scott Miller and Sam Prebble. Right now the game could still use a bit of ironing, but it’s polished well enough to give it the game a good recommendation.