In this preview, we step into the worlds of swords and wands. 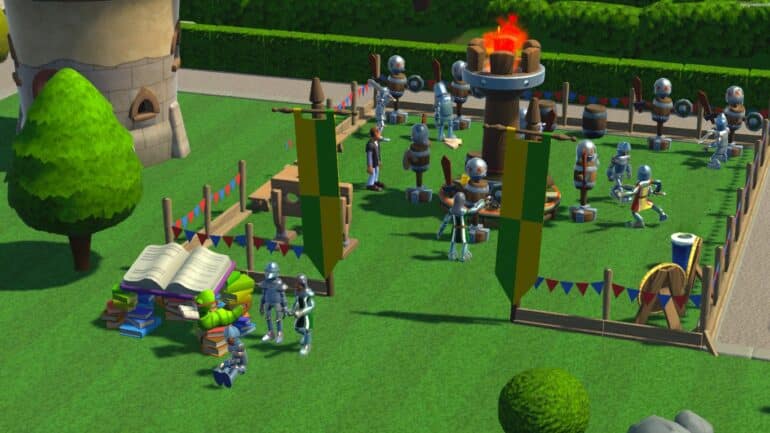 We are a little more than a couple of months away from the release of Two Point Campus and here we are again for another preview of the game. In our previous preview, we got to experience the beginnings of the game and previewed the Gastronomy course at the Piazza Lanatra level.

In the latest preview event last May 19th, Two Point Studios gave us the opportunity to preview the 3rd and 4th levels of their upcoming management sim game.

The new Noblestead and Spiffinmoore levels expand on everything we have already seen from the current build of the game. From my perspective, this preview expanded on everything about the game. There is a new sense of urgency when dealing with potential disasters, within and without your campus.

What’s more, these new levels will test your multitasking abilities. Especially in Spiffinmoore, where an actual curse has taken hold of the place. No biggie though, it’s just another day for the person in charge. You can do all that on top of dealing with meddlesome trespassers, physical injuries, and natural disasters.

Imagine a place where knights and nobles never went out of style. Well, you don’t need to imagine too much, you can always pack your bags and pay Noblestead a visit.

Noblestead is a town steeped in tradition. This extends to the prevalent profession in the area, Knighting. (Ok, it sounds really weird but humor me a bit.) And as such, the perfect place to introduce new concepts like rival schools, medical issues, and disasters. The knights-in-training are a hardy bunch. They practice with the sword, scale towers, and participate in jousting tournaments.

What surprised me the most about Noblestead is how most of their classes take place outdoors. If you plan to have this course in one of your schools, it better have A LOT of outdoor space. Two Point Hospital required a fair bit of space for their rooms, but very few can actually need around a dozen tiles long to be functional. It was challenging to make a decent layout and make the grounds look good.

Being a knight must be a physically demanding profession. They participate in jousting tournaments and climb towers all day. It’s a good thing then we have first medical rooms that treat all these bumps and bruises. This felt more like Two Point Hospital, though it never got to the point where I needed to create 3 more treatment rooms at a moment’s notice. I was prepared this time.

The introduction of rival schools, or rivals in general, is something I very much am looking forward to. In Noblestead, you need only have a janitor with a security badge to ward them away. And from what I know, keeping your campus safe and secure for your students is going to get more active. Like how you will have to root out enemy spies in spy school. It’s going to get real hectic in later levels, I’m sure.

Looking back, the only time when things started to get get out of hand was when I introduced the Gastronomy course in Noblestead. I don’t what I was thinking at the time. Maybe it was because things were going too well that I decided to rock the boat a bit. Now, I’m in a situation where one course requires a lot of outdoor space and another that requires a lot of indoor space for their rooms. Things weren’t so smooth sailing for a while. Still, it was fun. Finding a good compromise for both courses. Lesson learned though.

One of the things to keep note of this level is the fact that it is set in a cold region of the map. You need to add a heater in certain places to keep the temperatures nice enough that it encourages a learning environment. This is nothing new in Two Point but I was hoping for a new twist on it. Then again, I suppose it was my mistake for adding modern heaters to the rooms. Torches would have worked better thematically. Then again, fire pits increased the temperature a little too much.

The Wizardry and Dark Art courses have some of the best animations I’ve seen yet in the game so far. Watching the animations play out for the most common interactions is really entertaining.

The Wizardry and Dark Art aren’t dissimilar and yet they have their own rooms. I suppose it makes but I gotta say it is weird that the biggest difference between the two is that one course requires the wearing of Harry Potter cloaks and the other white face paint and trenchcoats.

As previously noted, this new region has a curse to it. You’re going to need Pastoral Services with an Assistant to give them advice and uplift their spirits. This is probably the closest connection I’ve had with Two Point Hospital. I build one Pastoral office, thinking that would be enough. 2 minutes later – the students in line for advice reach the double digits. And that’s when I remembered the times when 4 general diagnosis offices weren’t enough. It’s like I never left the hospital. (Crying on the inside.)

The Things You Notice When Playing Two Point Campus

When I look back and compare the current build of Two Point Campus to Two Point Hospital, I can’t believe how many unique animations they’ve added to the new game. It came to the point that I was buying all sorts of random items with my coins for the purpose of having the little persons interact with them. Let’s just say I was not disappointed.

And there were things I didn’t even expect to see. If a Wizardry student was in really high spirits they would use their magic to help the janitorial staff and use their magic to make trash disappear. With all the freak storms and sudden meteor showers Spiffinmoore experiences on a regular basis, the janitors can take all the help they can get.

Research and training rooms are available in Noblestead and Spiffinmoore. They come in handy with improving facilities and training staff, respectively. The odd thing about the Research Lab is the moment I put it down, I was constantly getting requests for facility additions. I like that we can research more items but goodness I kept shifting entire rooms around to find space for them. It also doesn’t help that it takes a while for research to complete. I can get a dozen or more requests for the same item before the research bar gets to 50%. I guess these kids will have to learn patience as a virtue.

One solution to the problem could be to hire professors with high Research skills. But that is more money than I am willing to part with. (Kidding?) Another option I have is to make a training room. The new training room is actually a step up from past iterations. I was expecting to hire someone with the right skills from outside. Imagine my surprise when all I had to do was hook up my stuff to a brain machine and they got the information they needed without outside help. It is both practical and entertaining.

And that’s about it for this current preview, biggest takeaway is the number of new decorative items they’ve added since the last preview build. I’m sure it’s got more to do with the themes of knights and wizards but there’s no denying that small things like unique interactions make buying these things worthwhile.