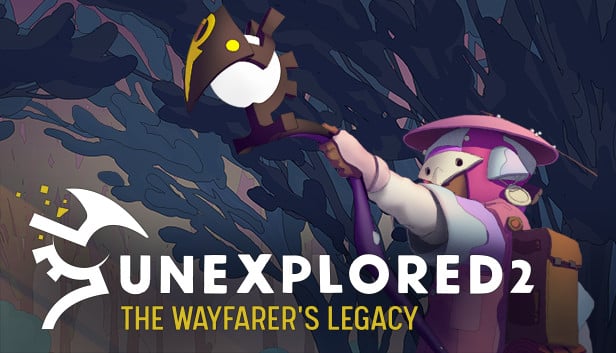 Publisher Big Sugar and developer Ludomotion have announced today that their highly anticipated and ambitious procedural open-world RPG, Unexplored 2 The Wayfarer’s Legacy, launches on PC on May 27th, 2022. The game is an extremely ambitious indie game, a new blend of genres, cultivating what has already been called “the most innovative adventure game in years”.

Players can start exploring their own unique worlds on PC (via Steam, GOG, Epic Games Store, etc). The game is priced at $24.99, with a 10% discount for a limited time. A Digital Deluxe Edition, which bundles the game, artbook, and official soundtrack, will be available on Steam.

Developed by a small team, Unexplored 2 spent a year in Early Acces and is now ready to fully launch on multiple storefronts. Its development won’t stop there, however, as the studio and publisher plan to continue supporting the game with patches and content updates.

Furthermore, the Xbox One and Xbox Series X|S versions are in the works as well and a release date for those platforms will be announced at a later date.

The game offers players a beautiful but challenging, procedurally generated open world in which they can explore and adventure. Each time they die, their world remains, but time will pass and events will change the lay of the land.

At the end of their journey, during the final stretch of their journey, players will go in all the way: they either succeed and save their world, or fail and see it destroyed, forever. Even their save game will be deleted. After each attempted run, Unexplored 2 generates an entirely new world for the player to discover. A new world that offers new biomes and different clans, puzzles, and enemies.

Unexplored 2 won ‘Best Audio & Music’ and ‘Best Technology’ at the Dutch Game Awards, and PC Gamer has hailed it as “the most innovative adventure game I’ve played in years.”

A demo for Unexplored 2 is currently available as part of the ‘Going Rogue’ event on Steam, which starts on May 2nd (10 AM PT) and ends on May 9th (10 AM PT).

About Unexplored 2 The Wayfarer’s Legacy

One quest. Unlimited adventure. Unexplored 2 The Wayfarer’s Legacy is a challenging roguelite RPG with a table-top feel, procedural node-based open world, and a cool twist on permadeath. Leave the Dungeon of Doom behind and venture into a vast, wondrous world as you embark on a heroic quest to destroy the mysterious Staff of Yendor.

Unexplored 2 The Wayfarer’s Legacy launches on PC on May 27th, 2022. A console version of the game will be announced at a later date.