What Does Marvel’s Spider-Man Bring New To The Table? 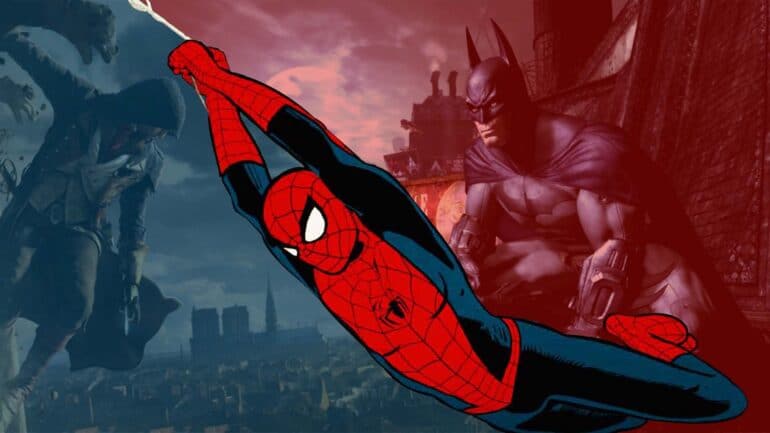 In the current climate, it seems that no matter where you look, there’s another open-world game right around the corner. Most share and build upon gameplay mechanics between each other. We have those that stay within the mold, such as Assassin’s Creed or Far Cry, and then you have those that take an established design or trope and make something new out of it, such as Breath of the Wild.

Marvel’s Spider-Man is yet another open-world game, where it has you swinging around New York and ticking off things to do in certain sections of a map. But what does it do differently and does it do anything differently at all? What are the design philosophies that are being implemented and does Spider-Man take a new spin on the status quo?

Marvel’s Spider-Man’s open-world gameplay can be broken down into four categories: traversal, map, side activities, and combat. These four aspects sum up the major hooks of what Spider-Man has to offer on the PS4, and the same goes for the many other open-world games out there. It’s what makes an open-world game worth coming back to and even to make the jump at all for some. Are Spidey’s offerings different and good enough warranting the plunge or possible revisit?

The first aspect, traversal, is perhaps the biggest and most unique slam dunk, especially when comparing it to the competition. No other game out there can offer the feeling of web-swinging through a city. Some have come close, such as the Infamous series or even the Batman Arkham games, but there’s nothing as interactive and exhilarating as nose-diving from a high point and shooting your web out at the last second.

Traversal is a low point for many open-world games, despite the gameplay essence being to explore. Going from point A to B can be quite a chore when there’s nothing to do other than either driving a vehicle or constantly rolling because it seems a bit faster than just walking. Many games have circumvented this by setting up fast-travel points so you can get right to the good stuff. Marvel’s Spider-Man, however, puts the need for fast travel to bed. Why skip, when you can swing? The option is there, but it’s rarely a consideration since Insomniac games have done an amazing job with the web-swinging, making you think of clever ways you can interact with different buildings or objects to spice up your traversal.

The map that is being traversed is a different story, however. Spider-Man’s map shares a design trope from many other open-world games: towers. Just like its contemporaries, the towers are used to unlock certain sections of a map and give you points of interest to look out for. There isn’t much to be found when it comes to genuine discovery with this design philosophy, and the map becomes more of a checklist of things to cross out, rather than a guide for your whereabouts.

Last year’s The Legend of Zelda: Breath of the Wild, took this same design trope and stripped it down completely, giving it new life. Instead of showing you points of interest once unlocking the tower, it fills out the terrain and acts as a fast-travel point, nothing more. This leaves the discovery of such points of interest up to you and the map acts as more of a guide, where you can put stickers or checkpoints on certain parts of your map for things that you want to return to in the future. Each map is unique from player to player in Breath of the Wild. Spider-Man’s isn’t, however.

That it isn’t to say that there aren’t any hidden easter eggs to find or things unique to New York to seek out, but it isn’t something that adds to the core of gameplay or even incentivizes the player to explore. Unfortunately, Spider-Man’s map acts more of a checklist than a guide.

Now, just because the map and New York itself borrows the same design philosophy of most open-world games, doesn’t mean that its side activities do too. The contrary doesn’t follow the same vein as what Breath of the Wild did by turning things on its head or even giving The Witcher 3 level of exciting side-quests that provide an interesting narrative. Instead, it’s a more light take on what’s the norm and giving just enough of a twist to make it unique to Spider-Man.

Unlike most open-world games, Spider-Man’s side activities evolve as you progress through the main story. The tendency with other games is that, once you unlock a part of the map, all the side objectives are listed out and don’t really change as you progress through the story, sometimes breaking context. Spider-Man instead starts small and leaves more and more breadcrumbs as you play along. It’s a great way to address pacing issues that plague most open-world games, where there seems to be too much to do at one given time, such as The Witcher 3, where one thing leads to three other things, thus overwhelming the player. It also addresses the feeling of a stagnant world. Now, the things you’re doing and the New York you’re swinging through is in line with where you are in the story. It’s not much of a departure, but it’s a nice twist that addresses some issues present in other open-worlds.

Most of the time when doing these side-objectives in Spider-Man, you’re gonna let your fists do the talking. Being a superhero game, it’s unavoidable. But Insomniac did manage to avoid what most people were expecting, which was a Spider-Man skinned Arkham combat system. Marvel’s Spider-Man focuses more on aerial combat and gadgets, rather than the usual counter system present in games such as Shadow of Mordor, Assassin’s Creed, or the Arkham games.

Spider-Man relies heavily on using his gadgets to spice up the combat. There are 8 gadgets to choose from, with most focusing on unique ways to web up your enemies. They range from completely subduing an enemy to merely stunning them, so you can catch a breath and focus on a particular thug. Aside from the gadgets, the game incorporates Spider-Man’s agility in combat, where you’re better off jumping around and staying in the air than just being totally ground-based and fighting like a brawler. What’s more to this are the different costumes that have their own unique abilities. Each suit comes with one that charges up over time and can be used to give you that more of an edge in combat. Some act as AOE abilities, while others provide unique buffs to Spider-Man.

All in all, Marvel’s Spider-Man does bring something new in some aspects, while sticking to the status quo in others. Despite being in a genre that’s seemingly flooding the market more and more each this generation, it is still a gem worth experiencing, even if you have open-world fatigue. Spider-Man is a game that warrants both the plunge and the revisit, especially when it comes to swinging around in your favorite neighbourhood.