Where to Find All 28 Unown Locations in Pokémon Legends: Arceus 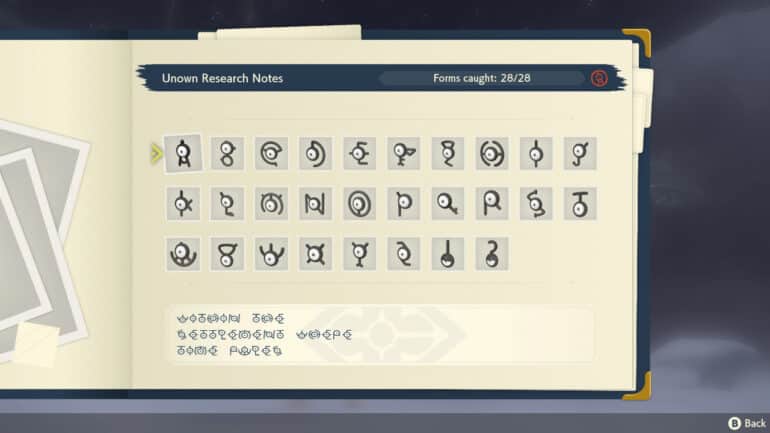 One of the sidequests in Pokémon Legends: Arceus will have you searching for all the Unowns that are scattered across the Hisui region. These Unowns are special and that they cannot be battled against, but they can easily be captured by a single Pokeball. Learn where to find all of them in this guide.

What is a Unown?

Unown is a flat, thin Pokémon shaped like an eye with appendages that make it resemble a letter or a punctuation mark. Unowns protect the cosmos from collapsing, their primary role is to run things from the shadows. When assembled in large numbers, they become omnipotent and can generate new Pokémon while in the presence of Arceus.

How to start the Unown Hunt quest

To start the Unown Hunt quest, once you recover the missing stone slab from the Misfortune Sisters and return it to the Solaceon Ruins in Crimson Mirelands, go back to Professor Laventon and he’ll notice that there’s something stuck on you. It turns out that it’s an Unown and it flees away. You’ll then gain access to the Unown section of your Pokedex. There are 28 different Unowns that are present in the game, from A-Z plus ! and ?.

Where to find the Clues on the Unown Locations

Once you access your Pokedex, you’ll see an additional tab to the right with an image of an Unown. Press Y to open the section that’s dedicated to the Unowns you’ve caught and have yet to catch.

Selecting one of the Unown boxes will actually show a clue that tells the location where you can find that specific Unown. The catch is, it’s cryptic and it’s written in Unown alphabet. The good thing is the alphabet is not that hard to decipher as they resemble the English alphabet, and there are lots of Unown alphabet charts in the internet.

Where to find and catch all Unown in Hisui

A Unown can be found at Crimson Mirelands: Diamond Settlement, on top of one of the tents near the Psyducks.

B Unown is located at the Cobalt Coastlands: Firespit Island, on the volcano itself. Use a Feather/Wing Ball to reach it.

C Unown is at Coronet Highlands: Celestica Ruins, on top of the formations situated on the farthest end of the west side.

D Unown is found in Crimson Mirelands: North of Golden Lowlands, where the Misfortune Sisters were first encountered.

E Unown is located at the Obsidian Fieldlands: Grueling Grove, in the tree near the island near the Alpha Heracross.

F Unown is found at Coronet Highlands: Ancient Quarry, on the rocks behind where the Alpha Goodra is.

G Unown is located in the Obsidian Fieldlands: Obsidian Falls, at the very top of the waterfall, stuck to a boulder.

H Unown is found in Jubilife Village: on the welcome sign of the village.

I Unown is situated at the Obsidian Fieldlands: Lake Verity, outside the cave.

J Unown is at the Coronet Highlands: Ancient Quarry, at the very top of the right side.

K Unown is located at Crimson Mirelands: Shrouded Ruins, on the stone formation near the cliff.

L Unown can be found inside Coronet Highlands: Wayward Cave, left side from the entrance, behind the breakable rocks.

M Unown is at the Crimson Mirelands: Sludge Mound, inside one of the hollow trees.

N Unown is over at Cobalt Coastlands: Sand’s Reach, on the eastern rock formation.

O Unown can be found at Alabaster Icelands: Avalanche Slope, on one of the pillars within the underground cave that has the Alpha Frosslass.

P Unown is located at Coronet Highlands: Fabled Spring, within the flowers next to the river.

Q Unown is found at Cobalt Coastlands: On the right side, next to the Turnback Cave entrance.

R Unown is in Cobalt Coastlands: At the very tip of Veilstone Cape, in between the two rock arches.

S Unown is located at the Obsidian Fieldlands: Tidewater Dam, the part of the river that has a dam, near the Alpha Bibarel.

T Unown can be found at the Alabaster Icelands: Avalugg’s Legacy, one of the smaller ice formations surrounding the big one.

U Unown is at Alabaster Icelands: Heart’s Crag, climb on top of the water fall, behind the statue at the very top.

V Unown is located in the Crimson Mirelands: Scarlet Bog, west side where there’s an island with Hippowdon spawns.

W Unowns is found at Jubilife Village: Left eye of the left Magikarp on top of the Galaxy Hall. Use a Feather/Wing Ball to reach.

X Unown is at Obsidian Fieldlands: On one of the branches of the tree in the Grandtree Arena.

Y Unown is found at the Alabaster Icelands: Icebound Falls, near the frozen waterfall.

Z Unown is in the Cobalt Coastlands: Deadwood Haunt, on one of the ship’s mast.

! Unown is at the Alabaster Icelands: Snowfall Hot Springs, on the dead tree in the hot springs.

? Unown is just over at Jubilife Village, behind your house, on the clothes line.

We have summarized all the 28 Unowns and their locations below:

If you like this guide, check out our other Pokemon Legends: Arceus articles:

Also check out this very helpful video by RuffledRowlit on All 28 Unown Locations in Pokémon Legends: Arceus