A guide on how to defeat Lilligant, The Lady of the Ridge. 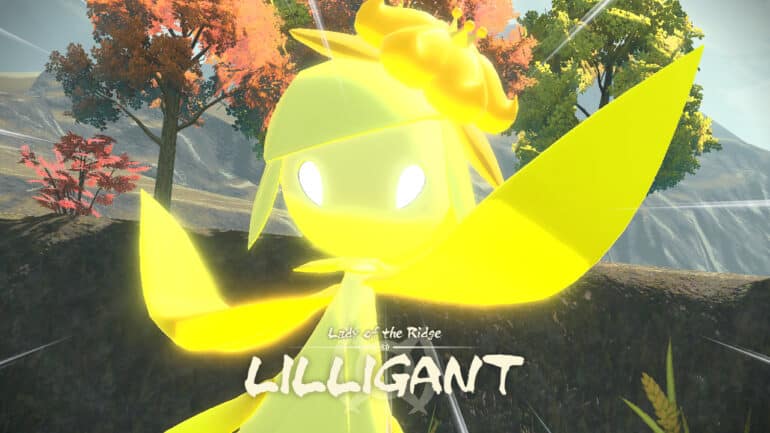 Lilligant is the second noble Pokemon that you’ll have to face in the Hisui region of Pokémon Legends: Arceus. This fight against Lilligant will also be following the same format as the Kleavor fight in which you have to quell its frenzy by throwing balms at her while avoiding her attacks. In this guide, we’ll look into Lilligant’s attack patterns and learn how to act accordingly to ensure victory.

The investigation towards Lilligant’s frenzy follows shortly from helping out Ursaluna from its rampage. It was found out that pollen from the frenzied Lilligant got on to Ursaluna, which has also agitated Ursaluna, but in a lesser extent. The fight takes place in Brava Arena on the north part of the Crimson Mirelands.

How to Beat Lilligant Boss Fight

Lilligant only has two types of attacks that can be used in quick succession are AoEs, so dodging at the right time and towards the right place are key to surviving and winning. There are also lots of openings to chuck balms at her as she also has one non-damaging move that she mixes in between her attacks.

Lilligant’s Attacks and How to Avoid Them

Lilligant crouches down before jumping and landing back down, releasing a shockwave from the point of landing. She does this twice in a row in the first part of the fight, and then three times in a row during the latter part.

How to avoid: Lilligant will attempt to land to where you are or close to it at the time of the jump. Time your dodge as soon as she lands to take advantage of your dodge’s invincibility frames, or i-frames. Be aware of the arena’s boundaries so that you don’t dodge towards them.

Lilligant crouches down as it appears to be storing energy. The tell for this move is the light particles that gets absorbed by her. She then stands briefly, releasing a ring shockwave, then crouches back down, stands back up and releases a second ring shockwave.

How to avoid: As Lilligant charges up for this attack, move a fair distance away from her. Once the first ring shockwave goes out, dodge towards it. As it is a ring, the space inside is safe to stand on. Dodging along it will get you hit as the ring moves as fast as your roll.

After your first dodge, back away a bit from her to give yourself some distance to prepare for the next shockwave. Between the first and the second shockwaves, you’ll have a brief window to chuck 2-3 balms at her.

Lilligant jumps in place a couple of times and twirls before ending with a pose. Some musical notes will also appear above her during this move. This is not an attack, but simply a move that you can use as an opening to throw more balms.

Lilligant Weaknesses and How to Counter

This particular Lilligant is a Hisuian variant with a Grass/Fighting type, which means she is it four times weak against Flying type attacks. You may also use Poison, Fire, Ice, Psychic, and Fairy type moves as these are super effective against her. This is a level 30 Lilligant, so level your Pokemon up accordingly.

If you have a Dartrix or a Staravia, then fighting Lilligant should be a breeze. Gastly can dish out poison attacks, while Psyduck have both water and psychic attacks; both can be found early on in the Golden Lowlands of the Crimson Mirelands.

Similar to Kleavor, you may also avoid battling Lilligant and just continuously throw balms at her. The advantage of engaging in a battle is that once you defeat Lilligant, she will get stunned which will give you enough of an opening to throw more balms. Plus, the battle serves as a rest from all the dodging.

Once Lilligant’s frenzy has been quelled, it will come back to its senses and give you the Meadow Plate, an item used by Arceus to gain the power of the Grass type.

Can this Lilligant be Captured?

No, since this Lilligant is one of the noble Pokemon. If you want to get your own Hisuian Lilligant, you can catch a Petilil in the Gapejaw Bog or Holm of Trials in the Crimson Mirelands. As for the Sun Stone that you need to give to Petilil, it can be purchased via the Trading Post with Merit Points, or through Ginter’s Specials for 5,000 Pokebucks. You may also randomly find one while searching for treasures with Ursaluna or from space-time distortions as a random drop.

Check out this video by Release-Fire about how to beat Lilligant: