Reasons why you should play with friends! 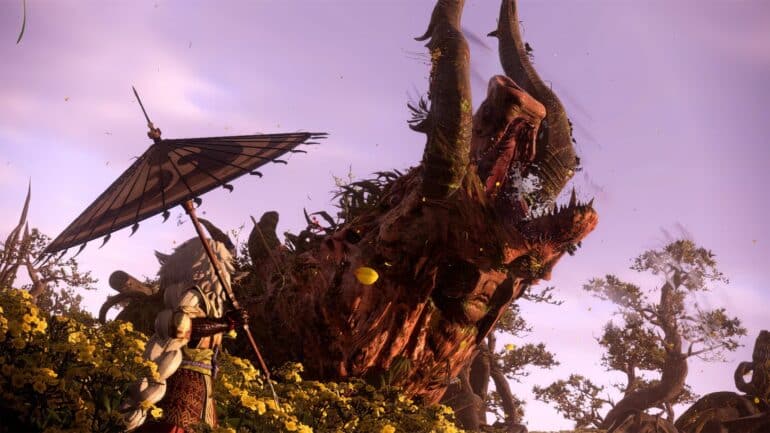 After the big reveal of Wild Hearts a few days ago, a new Wild Hearts gameplay trailer was released, as promised by Omega Force a while back. This new footage features one hunter preparing himself for a big hunt on one of the most powerful Kemono in the game, the Kingtusk.

The video shows how the karakuri, the ancient technology gadgets, use in the game. It can be used for traversal, battles, and more depending on the situation. It can be used as a platform to easily climb a hill, fill a gap, and more.

Player Two finally arrives with an ancient umbrella with blades as a weapon. She joins Player One in the hopes to turn the tide against the monstrosity. On the way, they defeat a mini-Kemono toad. After killing it, they harvest its parts, possibly for materials that can be used to strengthen their armor and weapons, just like in Monster Hunter.

The two warriors arrive and finally square off with the Kingtusk for the second time. They can now damage the monster until they break one of its tusks with dire consequences. This angers the Kingtusk, which gives it a look of a crazed stage and makes it become more powerful. While they were slowly getting overwhelmed, a new character joins.

Player Three arrives with his own weapon, but currently, it is not clear what type of weapon it is. It looks like a spiked club or a bo staff that can transform into a large ninja star. He can also create a bomb karakuri which becomes the secret weapon against the Kingtusk. When detonated, the monster is damaged a lot and gets weakened. Player One then approaches the Kingtusk on its last death throes and apologizes as he brings down the death blow.

Wild Hearts is developed by the Japanese studio Omega Force, the ones behind the popular Dynasty Warriors franchise, and in partnership with EA Originals. It will launch on February 17, 2023 on PC, PS5, and Xbox Series X/S.