A prelude to a war of words 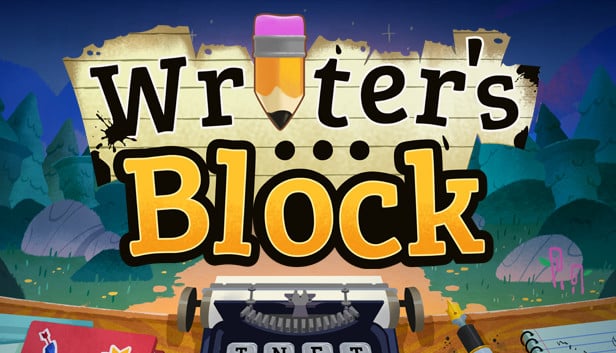 It’s not very often do I come across something as interesting as a battle word game, but here we have Writer’s Block. The game itself is developed and published by Tic Toc Games, and considering their last game, the adorable shmup B.ark, it didn’t surprise me in the slightest that Writer’s Block has the same kind of visual charm B.ark has.

At the very core, Writer’s Block is a roguelite RPG. Players to move from point to point, taking part in word battles and coming across the occasional random event. The player spell out words on the on-screen typewriter. Each letter tile does one point of damage to the selected enemy. The longer the word, the more damage it does. During the enemy’s turn, they can convert letters into hostile letters. If the player doesn’t incorporate those letters into their next attack, the tile will most likely cause damage to the player.

I say most likely because it’s not always as straight forward as choosing different looking tiles and incorporating them into your attack. Some other tiles will cause harm if they are part of your attack. This s why I keep double looking at the conditions before finalizing my attack. By my second playthrough, I got real good at avoiding major damage, though it came to the point that I was juggling letters until an acceptable word comes together.

The game does a great job with incentivizing players to finish battles as quickly as possible. The longer a battle goes, the character starts getting frustrated. As the stress grows, the character’s attacks become less effective. I can imagine how this will affect boss battles. Thankfully, I was able to get through most trials… until I reached final boss of the demo.

On my first attempt at the demo, I took the less stressful route and tried easing myself into the game’s flow. I took quite a beating, cause I wasn’t paying attention to hostile tiles piling up. I got all the way to the end of the demo before the program froze on me.

My second playthrough was more eventful though. I encountered a unicorn that took effort to keep up with. I was so happy that I was able to put together words with enough letters to overcome the instance. Clearing this and beating the sun mini-boss were the highlights of that playthrough. Unfortunately, I wasn’t able to fight the final boss on account of the encounter bugging out. I was bummed out, of course, especially after I gathered a good amount of stuff for the battle, but it’s a demo so it’s all good.

I enjoyed gathering items and getting the most out of every single item that improved my damage. I was actually overjoyed when I discovered item enhancement. Suddenly, a whole new way of playing opened up. This is probably what I’m looking forward to the most.

I can’t really say that this is going to be called frustrating, but there are times when I was so close at putting a word together only to be met with… writer’s block. Maybe head scratcher is more appropriate, like how someone mulls over crossword puzzles. Interestingly enough, this was something I’ve come across when I was playing scrabble – If you don’t have an S or R or even the T letters in your back pocket, you’re going to have a hard time. The range of words you have is so limited without them.

At the same time, I dread the possibility of getting multiple X or Q letters on the board. At least I can mulligan and get a new set of letters. Though tanking the damage is concerning.

Writer’s Block is shaping up to be a unique and fun experience for those who love word puzzle games. With the news of the game getting different characters at launch, I can’t wait what kind of stories I may be able to tell as them. The rougelite element of the game is still not very well defined at the moment, though I suspect it’ll have something to do with bringing items over from previous runs. That’s my guess, at least. We’ll have plenty of time to ponder such things as the game releases on August of this year.

The demo is available right now for people are interested in trying. And don’t you worry much, the letters don’t hurt… much. I’m kidding. Maybe.