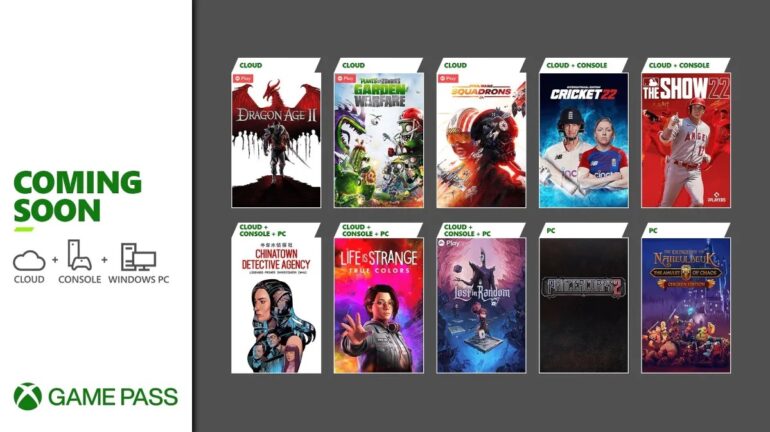 Microsoft has recently revealed 10 new titles that will be included in the Xbox Game Pass April 2022 games lineup.

Xbox Game Pass subscribers will be able to download all these titles starting right now for PC, Xbox One, and Xbox Series X|S. There is a good mix of RPG games and multiplayer games. Dragon Age II, a BioWare classic, will be on the service as well as an anticipated pixel art point-and-click game, Chinatown Detective Agency.

Starting today, Cricket 22 and MLB The Show will go live on the service on both cloud and console.

Cricket 22: Step onto the field for the most comprehensive cricket game ever! With more licenses, a narrative-driven career mode, and 4K visuals, Cricket 22 is a true next-generation sporting experience. All-new control options make the game more accessible to players of all skill levels, while Bint Ant Studios’ authenticity of every aspect of the sport provides hundreds of hours of hyper-realistic cricket action for fans. Lead your team to glory, your way!

MLB The Show 22: Experience faster, deeper, and more intense rookie players and returning seasoned vets. Every pitch. Every hit. Every win. Make your mark and Own The Show in MLB The Show 22.

Chinatown Detective Agency will become available on day one with Game Pass on April 7th. It is a cybernoir point and click adventure blending stunning retro design with innovative mechanics. Play as Amira Darma, an ex-cop who has just opened her own detective agency. Choose your clients, travel around the world and solve dangerous cases using real-world research.

Dragon Age 2 is going to be available via Cloud starting on April 7th. Experience the epic sequel to the critically acclaimed Dragon Age: Origins. You are one of the few who escaped the destruction of your home. Now, forced to fight for survival in an ever-changing world, you must gather the deadliest of allies, amass fame and fortune, and seal your place in history. This is the story of how the world changed forever. The legend of your Rise to Power begins soon with cloud gaming via EA Play.

Plants vs Zombies: Garden Warfare and Star Wars: Squadrons will both enter the service on the same day of April 7th.

Plants vs. Zombies Garden Warfare digs into the trenches with an explosive action experience. Blast zombies, plants, and unique characters across a mind-blowing world and enjoy the depth of a traditional online shooter plus the refreshing humor of the Plants vs. Zombies universe, coming soon with cloud gaming via EA Play.

The New Republic fights for freedom. The Empire demands order. The Galactic Civil War is at a tipping point in a time where ace pilots on both sides could make all the difference. Master the art of starfighter combat in Star Wars: Squadrons with cloud gaming via EA Play.

Life is Strange: True Colors is coming onto the service starting on April 12th. In the award-winning entry in the acclaimed Life is Strange series, Alex Chen hides her curse: the psychic power of empathy, the ability to absorb the strong emotions of others. When her brother dies in a so-called accident, Alex must embrace her power to find the truth.

Panzer Corps 2 goes live on April 12th as well. Enjoy the time-proven gameplay formula which has been appreciated by millions of players over the years, brought to a whole new level of refinement up to the latest technical standards.

Available now on Cloud and Console, and coming to PC Game Pass on April 12th, step into the wacky heroic fantasy universe of the Dungeon of Naheulbeuk. Lead a team of unlikely and clumsy heroes in an epic and challenging tactical RPG. Live an adventure filled with humor, surprises, and silly encounters.

Play the odds in Lost in Random, a gothic fairytale-inspired action-adventure where every citizen’s fate is determined by the roll of a dice. PC Game Pass & Ultimate members start their journey with EA Play on April 14th.

In Case You Missed It

In addition, some surprise game drops you might have missed since Xbox’s last announcement. All these games are available now.